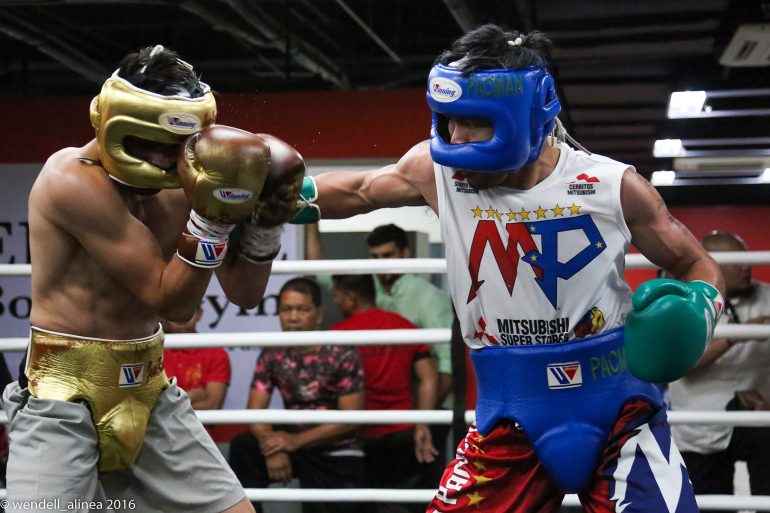 MANILA, Philippines – Tuesday was another day and another gym battle for Manny Pacquiao as he completed five rounds with unbeaten prospect Jose Ramirez and another three with Filipino journeyman Leonardo Doronio as he continues to prepare for his fight with WBO welterweight titleholder Jessie Vargas on Nov. 5 at the Thomas & Mack Center in Las Vegas.

Pacquiao went toe-to-toe with Ramirez, a 24-year-old junior welterweight from Avenal, California whose build and style reminds trainer Freddie Roach of Vargas, with both men trading power shots in an exhibition which could have sold tickets on its own. Ramirez brought out the fighter in the 37-year-old Pacquiao, forcing him to fire back with double and triple left crosses to earn space. Ramirez was replaced by the local fighter Doronio (15-13-3, 10 knockouts), who spent his rounds looking for a left uppercut while getting tagged repeatedly. 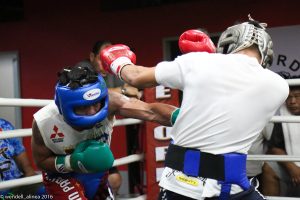 Ramirez, who is also trained by Roach, was thankful for the opportunity to work with the boxing champion turned Philippine senator.

“When he lands a good punch on me, I’m not the one to take a step back. I come back with my combinations and that surprises Manny,” said Ramirez (18-0, 13 KOs).

Though the session was closed to the public, several fans found ways to watch Pacquiao in action in the gym’s hallway.

Pacquiao (58-6-2, 38 KOs) was also happy with his work, which came after a full day of legislative work down the street in Pasay City in Metro Manila, Philippines.. He acknowledged that Vargas’ combative style was the kind which usually produces his best performances but says he isn’t going to cut corners in preparation.

“Yes he’s good for my style but I won’t [be] overconfident. I won’t take lightly this opponent. I want to make sure that I’m in 100 percent condition. That’s why I train hard,” said Pacquiao.

“I know his style, so we know what we’re gonna do. I know what I’m going to do to him.”

Vargas (27-1, 10 KOs) of Los Angeles won the vacant title in March with a ninth round technical knockout of Saddam Ali after Timothy Bradley Jr, the only boxer to beat Vargas, vacated the title to face Pacquiao a third time for a bigger check than he would’ve received for a mandatory defense.

Ramirez thinks Pacquiao will do well against Vargas but doesn’t think the 27-year-old will be a walk in the park.

“Manny is the type of athlete who has such a big heart inside that ring. He’s always fighting hard, he’s always pushing himself. He meets whatever challenge comes in front of him. Jessie Vargas is a guy who comes forward. He’s a young champion whose very hungry. Best of luck to Jessie Vargas too. It’s not gonna be an easy fight for Manny Pacquiao,” said Ramirez, who has sparred four times in the two weeks since he’s been in Manila.

Pacquiao’s strength and conditioning coach Justin Fortune thinks Vargas isn’t at the level of fighter whom the Filipino has beaten in the past.

“Jessie Vargas is a good fighter, he’s an A-level fighter. These guys are Triple-As, Marquez, Morales, De La Hoya, Barrera. Jessie’s not there yet,” said Fortune.

Pacquiao and camp are expected to leave for the Philippines around October 20, says Fortune. When asked what motivated him to continue to train and fight hard, Pacquiao said he wants to prove that he can balance his life as a legislator and fighter equally.