They reside in the same city – minutes from one another. They attended the same school. They’ve known each other for the best part of two decades. They both became lightweight world titleholders. There is mutual respect on both sides and that is unlikely to change.

What a large portion of British boxing fans are hoping for, however, is that friendly Manchester rivals Terry Flanagan and Anthony Crolla will one day meet up in a prize ring.

On Saturday past, Crolla lost a 12-round unanimous decision and his WBA lightweight title to the excellent Jorge Linares in Manchester. Hours prior to attending that contest, this reporter drove through the shabby confines of a rundown Manchester industrial estate to meet up with WBO titleholder Terry Flanagan and his trainer, Steve Maylett, at “The Finest Boxing Gym”.

“Don’t get me wrong, Crolla is a local lad, he’s a nice kid and he’s my mate but I just think it benefits me if he loses tonight because a fight between us won’t happen if he gets past Linares,” reasoned Flanagan, who is rated No. 2 by THE RING at lightweight.

“If he wins, he’ll be able to say he’s number one in the division and then he’ll go off to the States for a rematch. If Linares wins, I’ll have two options. I could still fight Crolla, which is a huge fight over here, or I could go in with Linares. I’ve heard that Linares said he would be interested in coming back over here to face me in a unification fight if he wins tonight.” 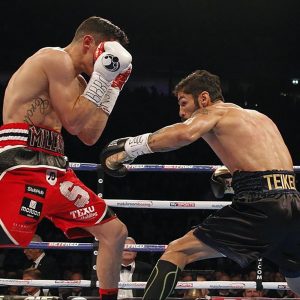 Crolla (left) covers up from a Linares attack.

The good news for the unbeaten Flanagan is that Crolla did lose. The bad news is that a rematch looks likely regardless. Both Linares and Crolla fought brilliantly at the Manchester Arena and a second fight undoubtedly sells, which will only add to the undercurrent of frustration which I encountered at Flanagan’s place of work.

Maylett is a hot young coach from the Manchester area who works exclusively with Flanagan. The pair have been together since the end of the talented southpaw’s amateur tenure and, together, they reached the top of the mountain following a long and arduous climb. The trainer remains unconvinced that a Flanagan-Crolla bout becomes a reality.

“The day after Crolla won the world title, Terry called (his promoter) Frank (Warren) and told him that he wanted the fight,” said Maylett. “Terry doesn’t do that. He usually just sits back and takes whatever fight is offered and goes into training. Anyway, Frank put in a big offer (to Matchroom Boxing) and it was rejected, then Frank said he would let Terry go (from BoxNation) to Sky Sports, providing he was paid right. I don’t know why there are issues in making the fight but the issues aren’t from this side.

“The biggest influence on the fight not happening is actually (Crolla’s trainer) Joe Gallagher. He called me two days after Crolla won the title and must have given me 10 different reasons why the fight couldn’t happen. He didn’t say it’ll happen in 2017. He didn’t say, let Terry and Crolla get past their mandatory challengers and then we’ll fight. He just said, it can’t happen. He said that the gate at the Manchester Arena doesn’t pay enough.”

A couple of weeks ago, Flanagan and Crolla bumped into each other following a yoga class. Crolla, as pleasant and charming an athlete as you could ever come across, bought his friend and cross-city rival a drink. That is one terrific example of sportsmanship but, despite the pleasantries, Flanagan remains keen to establish himself as the premier lightweight in the city.

“Everyone wants to see the fight,” he said. “I can go to a (Manchester City soccer) match and get stopped every two minutes by someone asking when I’m going to smash Crolla. He’ll be getting the same when he goes to see (Manchester) United.

Maylett interjected. “There are people who say nobody knows Terry but that’s a get-out clause. Everyone who knows boxing knows who he is and he’s probably better known in America than Crolla is. Crolla might look better in front of the camera, he might talk better and he might get a job as a commentator when he retires. That’s not Terry’s thing. Terry is just a f__ckin world class boxer who is 31-0.” 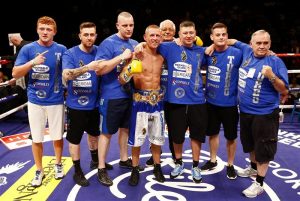 When this reporter visited with Joe Gallagher in Bolton last month, Crolla mentioned Flanagan as being in his future. One got the feeling, however, that the timing had to be right and Flanagan, in fairness, is coming off two less-than-stellar title defenses against Derry Mathews and Mzonke Fana, both of whom he beat on points.

On form, however, the fighter known as “Turbo” can be sizzling as evidenced by a second-round annihilation of Diego Magdaleno last October. In order to keep the pressure on, Flanagan is in need of a performance to remember but he remains disenchanted with how things are progressing.

“I just think (I’m avoided) because I’m so big and strong for the weight,” said the 27-year-old lefty. “I’ve had four world title fights at lightweight and it’s not getting easier making 9 stone 9 (135 pounds). Personally, I think all the lightweights are saying ‘let him get down to 135 a few more times and that might take something out of him’.

“Either way, if I don’t get a big unification fight by the end of this year, or the beginning of next, then I don’t see it happening. I really want to unify the division, but I’ve only got two or three fights left in me at this weight and then I’ll be forced to move up.”

In recent months Flanagan and Maylett have looked on helplessly as projected bouts with Crolla, Linares, Dejan Zlaticanin (WBC titleholder), Felix Verdejo and Juan Diaz have fallen through for one reason or another. At time of writing, an offer had been made to a “quality opponent” who could not be named, so expect news soon.

As indicated, a jump up to 140 pounds is definitely on the radar for Flanagan who is bursting at the seams every time he makes the lightweight limit.

“There was some talk of (Terence) Crawford moving up to 147 pounds, so his WBO title would have become vacant,” said Maylett. “The WBO have a rule that if you’re champion you can jump up and fight for the title in the next division.

“That was something we would definitely have considered because Terry’s career has always moved forward. In these last two fights, however, we’ve stayed put. We set goals together and after we won the WBO lightweight belt, our goal was always to win another belt and move up to the junior welterweight division.”

The clock is definitely ticking on Flanagan-Crolla but an entire city hopes that one day “The Battle of Manchester” can be settled with fists, instead of words.

Tom Gray is a U.K. Correspondent/ Editor for RingTV.com and a member of THE RING ratings panel. Follow him on Twitter @Tom_Gray_Boxing.