Gonzalez and Cuadras give fans one to remember 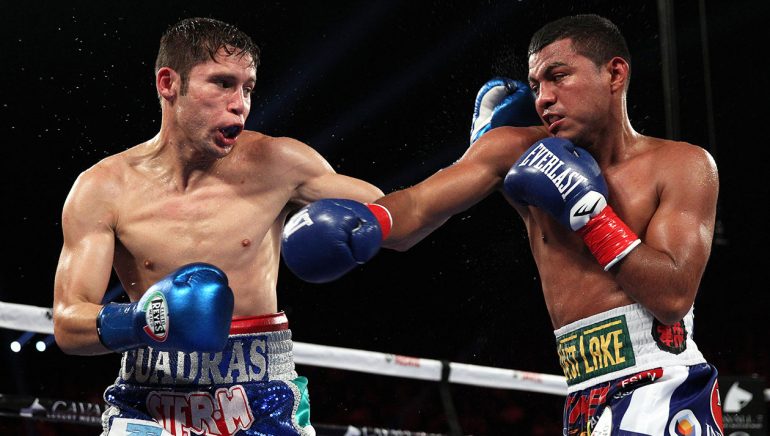 INGLEWOOD, Calif. – Roman Gonzalez and Carlos Cuadras occupy one of the lightest divisions in boxing but the junior bantamweights and their passionate fans created a huge fight atmosphere at The Forum on Saturday.

The arena wasn’t sold out as it was the last time Gonzalez fought here, in the co-featured spot under the Gennady Golovkin-Dominic Wade middleweight title fight on April 23, but the crowd of 6,714 made the noise of 20,000.

That’s because Gonzalez, who lifted the WBC 115-pound title with a unanimous decision, and Cuadras gave fans a reason to jump out of their seats and loudly cheer while proudly chanting “Nicaragua!” and “Mexico!”

The Forum hasn’t been this lively for a sub-featherweight main event since Humberto “Chiquita” Gonzalez fought Michael Carbajal in their anticipated rematch in 1994. Both Hall of Famers would approve of the beautiful and brutal combination of boxing skill, punching technique and heart that was on display during Gonzalez-Cuadras.

It was a bona fide Fight of the Year candidate and worthy of main event status at The Forum and on HBO Championship Boxing. It was also worthy of Gonzalez’s current status as the best fighter, pound for pound, on the planet. The 29-year-old Nicaraguan, who began his career at strawweight (105 pounds), won his fourth major title in a fourth weight class, surpassing the aspirations of his former mentor, the late, great Alexis Arguello. 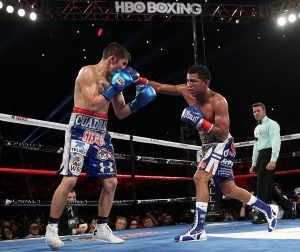 “(Cuadras) is very strong, my combinations were the difference.”

Gonzalez’s pressure – along with his blocking ability, punch accuracy and combination variation – was brilliant.

However, Cuadras’ lateral movement, hand speed, ability to switch stances and punch on the fly was dazzling at times. This was not a walk in the park for Gonzalez, who sported marks under his eyes and a swollen jaw after the fight.

“It was close but I felt that I won,” Cuadras said through translator Ricardo Jimenez. “He’s never been hit this much in his career, just look at his face.”

However, Cuadras (35-1-1, 27 KOs), a 28-year-old Mexico City boxer who made six defenses of the WBC title, was impressed with his challenger.

“He is relentless,” Cuadras said. “He didn’t get tired all night. His defense was better than I expected. He was stopping my shots with his arm and coming right back with his own punches.”

And so it went, round after round. Gonzalez was relentless, Cuadras was fearless, and they left the fans breathless.

It wasn’t the Big Drama Show. That took place on the same night in London at the O2 Arena where Golovkin stopped Kell Brook in five rounds. But while the Little Drama Show didn’t draw as much media attention or fans to its arena, it was the better fight.

And there are more fights of this caliber to come for the simultaneous holder of THE RING/WBC flyweight titles and the WBC junior bantamweight belt. If Gonzalez decides to drop back down to 112 pounds, there’s an anticipated rematch with WBO/WBA flyweight titleholder Juan Estrada. If he stays at 115 pounds there’s a rematch with Cuadras and a title-unification fight against Japanese wunderkind and WBO beltholder Naoya Inoue, who was ringside for Gonzalez-Cuadras. 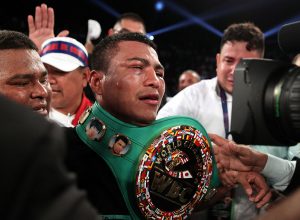 “Yes, I’m ready to fight anyone,” Gonzalez said when asked about Inoue during his post-fight interview on HBO. “I need to take some time off but I will face anyone.”

And when the Little Drama Show returns it will no doubt be in front of more fans.

In the co-featured bout of night, Yoshihiro Kamegai outworked and punished fellow hardnosed gatekeeper Jesus Soto Karass en route to a corner stoppage after eight rounds. Kamegai (27-3-2, 24 KOs), the faster and harder puncher throughout the fight, scored a knockdown midway through Round 8 of the anticipated rematch and swarmed Soto Karass mercilessly, forcing the Los Mochis, Mexico, native and crowd favorite to repeatedly hold.

The 15-year veteran’s corner did the right thing by keeping their man on the stool. Soto Karass (28-11-4, 18 KOs) has been in too many ring wars to mention and his grueling slugfest against Kamegai in their first fight on April 15, a Fight of the Year candidate that ended in a split draw, may have been his last stand.

The 33-year-old Tokyo native, who started fast and never let up, was able to see and counter most of the looping punches Soto Karass lobbed his way, although he was usually first to get off. Kamegai, who appeared to hurt Soto Karass to the body a few times in the early rounds, was also the better defender when in close, although it should be noted that the Mexican slugger had his moments in the middle rounds.