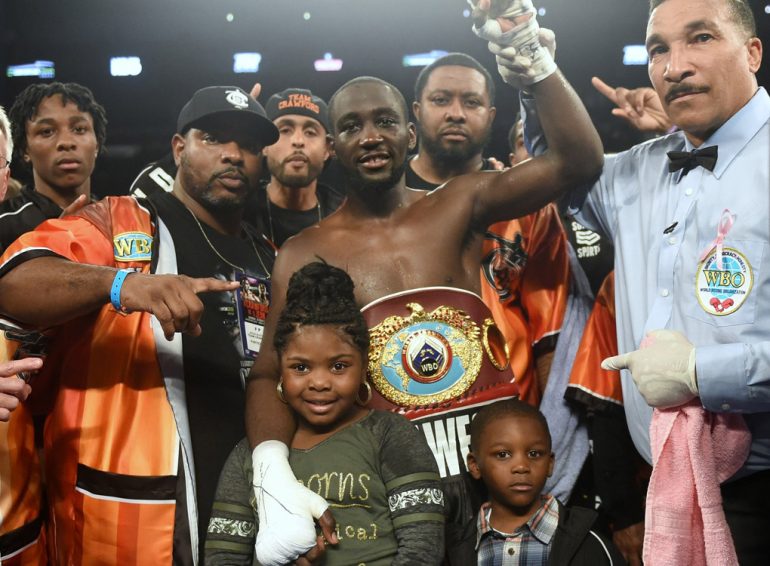 Terence Crawford: The impression that lingers after Crawford’s unanimous-decision victory over Viktor Postol on Saturday night in Las Vegas was how easy it was. Postol was supposed to be a serious threat to Crawford — a tall, tough boxer-puncher who had just taken out the respected Lucas Matthysse. Crawford (29-0, 20 knockouts) started slowly, as he typically does, but by the fourth round he was toying with the increasingly frustrated Ukrainian and was never truly challenged thereafter. The winner used his quick feet to give a Mayweather-like defensive performance; Postol couldn’t find him to hit him. And while Crawford didn’t land many punches, his shots were accurate and so fast it was difficult at ringside to see what type of punches were landing. He put Postol down twice in the fifth round, leaving the stunned loser more confused than hurt. That’s how baffled Postol was. It was a superb performance by a superb fighter. The victory earned Crawford the vacant RING junior welterweight championship and unified two alphabet titles. It also put him in position to claim a lucrative prize: Manny Pacquiao. I have no idea whether Pacquiao will actually take a break from his senatorial duties to fight again or whether Crawford might be his choice for the opponent. If Pacquiao does return, I’d like to think the future Hall of Famer will face the best possible opponent. That describes Crawford, particularly after Saturday night.

Viktor Postol: Postol (28-1, 12 KOs) flopped in what might turn out to be the biggest opportunity of his career. A lot of experts gave him a good chance of defeating Crawford in large part because of height and long jab, which was supposed to keep Crawford at a safe distance and set up the kind of power shots that took out Lucas Matthysse. Postol simply couldn’t handle Crawford’s speed, which his trainer Freddie Roach acknowledged at the post-fight press conference. The Ukrainian had his most success in the last two rounds, when he threw caution to the wind in a desperate attempt to knock out Crawford and pull out a victory. He landed only a few good shots but he gave himself a chance to win in those rounds. He probably should’ve started using that strategy – reckless slugging – by mid-fight, although it’s easy to make such judgments in retrospect. Where does this leave Postol? There is no shame in losing to Crawford, who obviously is a special talent and a bad style matchup for the loser. Postol, 32, is a very good fighter who will remain a factor at 140 pounds and up. I don’t know whether he’ll ever regain the respect he garnered after stopping Matthysse, though. That could turn out to be the greatest achievement of his career.

Oscar Valdez: This is another case in which we must temper our enthusiasm because of a so-so opponent but it isn’t easy to do that in this case. Valdez (20-0, 18 KOs) is one exciting fighter. The two-time Mexican Olympian tore into Matias Rueda in the opening round as if it were a one-round fight on the Postol-Crawford card, landing a series of bombs that initally revealed a pretty good chin on Rueda (26-1, 23 KOs). The poor Argentine could only take so much, though. Valdez put him down twice with body shots and generally beat the bejesus out of him until referee Russell Mora ended the slaughter before the end of the second round. Official time: 2:18. Valdez won the vacant WBO featherweight title in the process, which raises the question of how Rueda – an untested unknown – ended up in this position in the first place. More important than winning his first title, that’s the kind of scintillating performance that gets the attention of fans who adore fighters who are both gifted and thrilling to watch. That describes Valdez. Crawford very clearly was the biggest winner of the night given his dominance over an established opponent but Valdez made an enormous statement. I, for one, can’t wait to see how his career unfolds in the coming years.

I don’t get Jose Benavidez Jr. The talented welterweight contender was clearly better than Francisco Santana (24-5-1, 12 KOs) but allowed his opponent to remain in the fight by outworking him on the Crawford-Postol card. Benavidez (25-0, 16 KOs) looked terrific when he let his quick hands go but lulls in his activity – including way too much time spent with his back to the ropes – and a spirited effort by Santana turned what might’ve been a rout into a competitive 10-round fight, which Benavidez won by a unanimous decision. Benavidez is going to have to keep his foot on the gas to realize his considerable potential. … Nevada judge Adalaide Byrd had a forgettable night. She scored the Benavidez-Santana fight an absurd 100-90 shutout, which didn’t reflect reality and was an insult to Santana. He deserved better. … Two 2012 Olympians scored victories on the Crawford-Postol card. Light heavyweight prospect Oleksandr Gvozdyk, a bronze medalist in 2012, survived a knockdown to put Tommy Karpency (26-6-1, 15 KOs) away in the sixth round. Gvozdyk (11-0, 9 KOs) is from Ukraine. And Japanese middleweight Ryota Murata, a gold medalist in London, needed only 1:52 to stop George Tahdooahnippah (34-3-3, 24 KOs). Murata (11-0, 8 KOs) wants to fight for a major title now. The name Gennady Golovkin was even mentioned. I’m not sure Ryota is ready but he’s 30. Time is of the essence. …

The Valdez-Rueda fight is yet another example of a good fighter winning a major title against an opponent who by all indications didn’t deserve the opportunity. Boxing must do better. … 2008 Olympian Sergey Derevyanchenko (9-0, 7 KOs) made another strong impression by stopping veteran Sam Soliman (44-14, 18 KOs) in two rounds on Thursday in Mashantucket, Connecticut. He’s one to watch. … Everyone is intrigued by a knockout artist, which makes Jonathan Guzman intriguing. The Dominican has stopped all 22 of his opponents, including Shingo Wake (20-5-2, 12 KOs) in the 11th round to win the vacant IBF junior featherweight title Wednesday in Osaka, Japan. Wake was rated No. 6 by the RING going into the fight. Guzman appears to be the real deal. … Heavyweight contender Joseph Parker (20-0, 17 KOs) remained on a roll, stopping Aussie Soloman Hauono (24-3-2, 21 KOs) in four rounds Thursday in New Zealand. Parker is fighting every few months, which is allowing him to develop nicely. A title fight is in his near future.