Shabranskyy stops Riojas in Round 3 to cap LA Fight Club 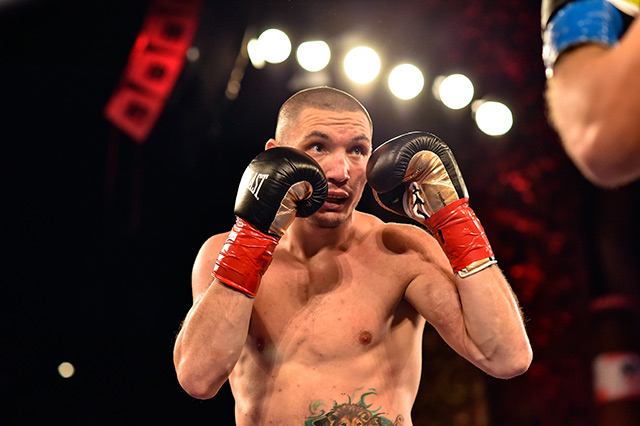 Friday was an easy night for the judges at the Belasco Theater in downtown Los Angeles, as the “LA Fight Club” card featured a string of mostly uncompetitive bouts that all ended before the final bell.

It was a methodical performance for the 6-foot-3 Shabranskyy (17-0, 14 KOs), 29, whose most significant victory to this point is a majority decision over Yunieski Gonzalez in December 2015 (with the justice-driven Cuban coming off a borderline robbery against Jean Pascal). “Slava” thus continues his promising rise in the Golden Boy stable.

Riojas (10-6, 3 KOs) was undersized, underconditioned, his southpaw stance was awkward and Shabranskyy was by no means difficult to hit, but there is just something very solid about the Ukrainian. The former kickboxer moves well on a stable foundation, he stalks, he waits, absorbs what he needs to and then punches hard. The damage is done suddenly and effectively. It works for him.

In Round 2 a cut had opened up between Riojas’ eye – the result of a punch. In Round 3 Shabranskyy floored Riojas with a single lead right. Riojas barely beat the count but was in no condition to compete and the referee waved off the fight as soon as Riojas took another punch. Official time was 1:40.

In his sixth fight at the Belasco, local lightweight Ivan Delgado knocked out Alejandro Ochoa in Round 7.

The action was mainly jab-and-grab until Delgado clipped Ochoa with a left hook midway through Round 1, causing Ochoa to stumble and touch his glove to the canvas. The knockdown lit a fire under Ochoa’s ass and he stepped up the aggression, but Delgado’s patience and cleaner technique easily produced the more damaging blows. 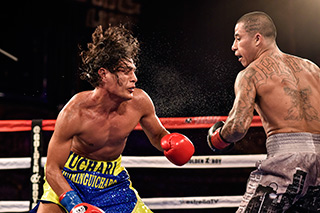 By Round 3, Delgado (10-0-1, 3 KOs) had squarely locked on to Ochoa’s main defensive deficiency and nailed him with one left hook after another. It was the only punch he needed until he scored with a left uppercut that staggered Ochoa in Round 4. After that it was an overhand right. Ochoa (7-12-2, 1 KO) circled and attacked with impressive volume but not much success, and paid dearly every time Delgado picked a spot to unleash another pinpoint counter-left hook. To his credit, Ochoa, who had only been stopped once in his previous 11 losses, looked like he was ready to crumble several times but didn’t.

It was the left hook again that finally broke Ochoa’s chin in Round 7, leaving him vulnerable to two or three more that seemed to put him horizontal to the canvas before he even hit it. Once he did, the fight was waved over.

In the six-round TV-opener (a “junior middleweight” mismatch for which the combatants weighed in at 148.2 and 143.8 pounds) Alexis Rocha (4-0, 3 KOs) stopped Israel Villela before the midway point of Round 1. The southpaw from Santa Ana, California, used combos with every punch thrown the same – hard – to establish his dominance from the start, and he knocked Villela down with a right-left hook pairing about a minute into the round. Villela (4-3, 1 KO) got up but was rescued by the referee from Rocha’s subsequent attack.

Lightweight Oscar Duarte took less than a minute to dispatch Omar Garcia in a scheduled six-round lightweight contest. Duarte (7-0-1, 4 KOs) essentially ended the fight with his third punch – a wide left hook that robbed his fellow Mexican of his senses and set up the barrage that put Garcia (5-4, 1 KO) down flat for the count.

In the night’s opening bout, local junior welterweight David Mijares kept his fledgling record clean with a second-round stoppage of Jorrell Sparenberg. Sparenberg (0-2) didn’t pose any threat but provided the surface on which Mijares could test his tools, which the promising southpaw did like a kid unpacking a deluxe-model Swiss army knife for the first time – some of those tools he’ll probably never use but hey, it’s fun to know they exist. Among the more useful punches were rapid-fire double jabs to set up clean straight rights, gut-seeking hooks and ambidextrous uppercuts. Midway through the second round, as the balcony chanted “Junebug,” Mijares (3-0, 2 KOs) landed a left hook that rocked the young man from Texas, and a few follow-up bombs triggered the referee’s intervention.