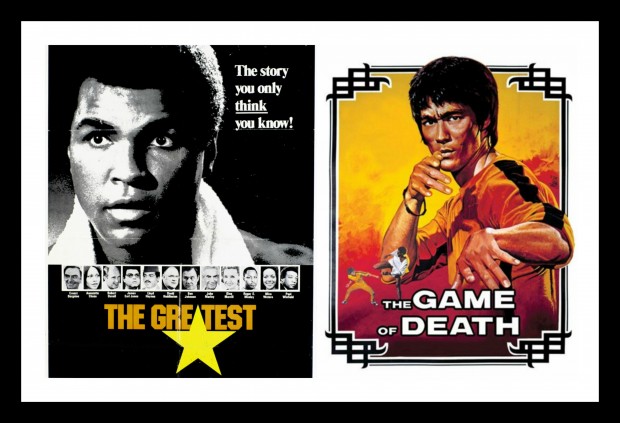 Editor’s Note: This feature originally appeared in the August 2016 issue of The Ring Magazine.

On July 20, 1973, the great martial-arts movie star Bruce Lee mysteriously died in Hong Kong. A cerebral edema (swelling of the brain) had claimed the life of this extraordinarily gifted 32-year-old, who would achieve posthumous superstardom when his seminal movie Enter the Dragon was released in U. S. theaters the following month.

Almost 8,000 miles away, in Deer Lake, Pennsylvania, Muhammad Ali was training hard to avenge his second professional defeat. Ken Norton, a former Marine, had broken his jaw and outpointed him in March 1973. And if he could repeat the feat, then Ali’s career would be in serious jeopardy.

Norton didn’t. On September 10, Ali scored a close split-decision victory at The Forum in Inglewood, California, which is only a half hour’s drive from Grauman’s (now TCL) Chinese Theater, where Enter the Dragon had premiered 22 days earlier. Although indirect, that is perhaps the closest these two incredible forces of nature ever came to one another.

They share an almost mystical fan affection because of their unique skills, which are sometimes overlooked because of their impact on worldwide culture. With that, the recent passing of Ali and some Ali-Lee chatter on social media in mind, we thought it would be interesting to explore a mythical “Battle of Icons.”

Lee was a boxing fan. In 1972, a telephone conversation was recorded by one of his first-generation students, Daniel Lee (no relation). During the chat, Lee can be heard referencing boxers for the first and, as far as this reporter is aware, only time in terms of available audio.

“Joe Frazier, there’s a man who is capable of using his tools and who is very determined in a savage, relentless attack,” said Lee of the then-reigning heavyweight champion before taking a swipe at one of Frazier’s predecessors. “Have you seen kickboxing? I saw it in Thailand. Well, the problem with (them) is that they are the ‘John L. Sullivans’ of the feet. I mean, no finesse.”

One can understand where Lee was coming from but while Sullivan didn’t impress him, the likes of Muhammad Ali and Jersey Joe Walcott most certainly did. Game of Death co-stars Dan Inosanto and Kareem Abdul-Jabbar, who were students of Lee, discussed Ali with their master on several occasions and the fluency of his footwork was what always caught Lee’s eye.

Watch Lee in any of his movies and you’ll get frequent glimpses of swift lateral movement. Like Ali, Lee was electric when he got up on his toes and his grace was something to behold. That didn’t come from nowhere. Lee’s widow, Linda Lee Cadwell, recalls “The Dragon” diligently studying Ali, as well as countless other boxing champions, on 8-millimeter film.

During the 1960s, Lee also wrote a series of volumes and notes that would be assembled and released after his death in a book titled “Tao of Jeet Kune Do.” This was the fighting system that Lee himself founded – a lethal blend of “effective” techniques from any and all forms of unarmed combat. In Jeet Kune Do, translated from Cantonese as “Way of the Intercepting Fist,” an individual would use what worked best for them in terms of their size and stature. This philosophy was arguably the precursor to mixed martial arts.

“The lead jab is a ‘feeler,’” wrote Lee in a chapter of the book entitled “Tools.” “It is the basis of all other blows, a loose, easy stinger. It is a whip rather than a club. (Muhammad) Ali’s theory is to picture hitting a fly with a swatter.”

For Lee to reference Ali in these unique writings speaks volumes about his appreciation of the eventual three-time heavyweight champion. 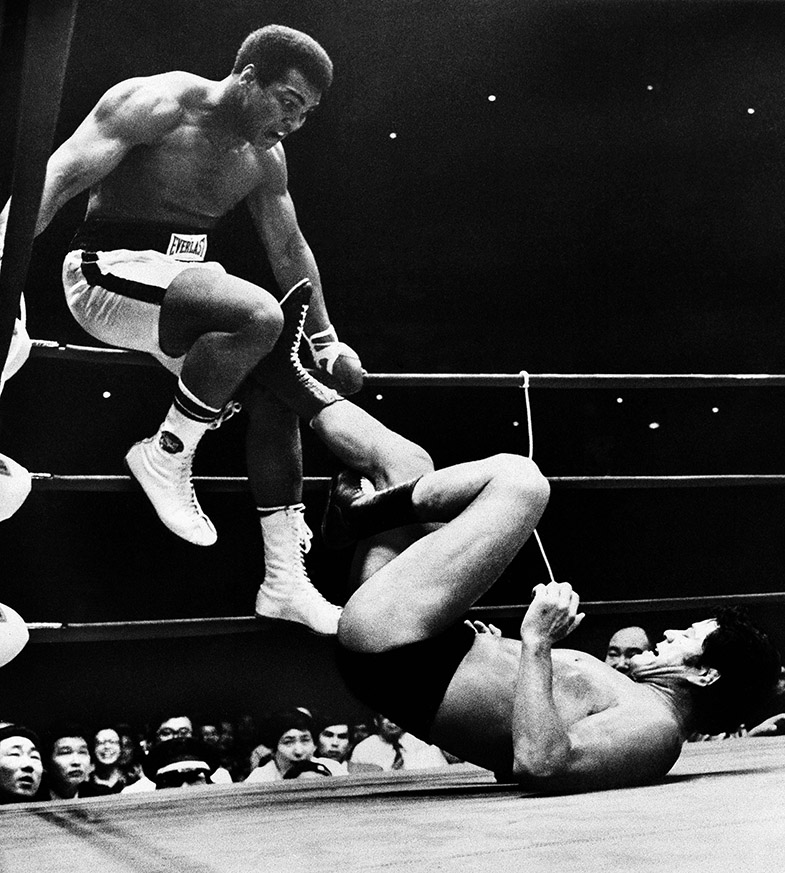 Ali fought outside of boxing rules only once and it was an unmitigated disaster. In June 1976, he ventured to Japan to take on a famous wrestler named Antonio Inoki. Why? Because he was offered $6 million for what appeared to be an exhibition with a joke-laden buildup. The problem was that Ali arrived at the Budokan Hall to face off with Inoki and nobody was laughing.

The heavyweight champ had trained briefly in Tae Kwon Do under the watchful eye of one of Bruce Lee’s closest friends, Grand Master Jhoon Rhee, and claimed to have developed the “Accu-Punch.” He needn’t have bothered. Prior to the bout, a ludicrous set of rules were put in place that prevented Inoki from attempting takedowns, submissions or kicks above the waist. What was left? The Japanese giant kicked at Ali’s legs for 15 rounds and absorbed a handful of jabs. To credit this as a mixed martial arts event, as some do, is overpraise. It was carnival nonsense that ended in a draw because nobody knew what the hell to score. Ali was later hospitalized with blood clots.

So what if Ali and Lee had gotten together? Unlike the Inoki affair, we can choose our rules. In a straight boxing match, Lee, a 5-foot-7 lightweight, or junior welterweight at best, would have no chance. One punch from Ali could potentially break his neck and no rational person would claim otherwise. Western boxing was a part of Lee’s game but he was no world champion and the weight differential makes such a matchup ludicrous to the point of being insulting.

Things change dramatically in a mixed martial arts bout. If Lee can use legs, then he has the power, skill and quickness to hurt Ali badly. A sidekick to the knee is longer than any punch you care to mention and a boxer has no way of defending against it. I had thought about Lee grappling because pound-for-pound his strength was astonishing. But would he really have been stronger than Ali? No, and there’s no evidence to suggest that Lee was an effective enough grappler to overcome such an enormous size disadvantage.

The one thing that cannot be ignored in all this is that Lee was not a professional fighter. Ask yourself, did he have a good chin? Did he have a good engine in a fight? Did he cut easy? Did he fade when the going got tough? We don’t know the answers to those questions because outside of third-party accounts and sparring exhibitions there is no evidence one way or the other.

Personally, I feel that Benny Urquidez, a legendary multi-weight world champion in full-contact martial arts, would have been too much for Lee. Why? Because he was a brilliant and seasoned professional who took hits for a living. There is no substitute for absorbing punishment and firing back. And if you’re not accustomed to that – you will lose. And how about Lee against modern UFC stars? The same problems would exist.

Lee was all about taking care of business on the street – in seconds. He was persistently challenged by stuntmen on the set of Enter the Dragon, and let’s just say he emerged undefeated amid a shower of blood and teeth. There just happens to be a difference between those types of encounters and a showdown against a combat athlete.

If we’re talking about potential, then there is no doubt that Lee could have been a magnificent professional fighter. With his innovative approach to the martial arts, his uncanny ability to master whatever he was shown in minutes and those incredible physical tools, he might have transcended boxing, or UFC, just as he did action cinema. As a martial artist, Lee is the closest thing to perfection that I’ve ever seen and I doubt that will change in my lifetime.

The influence Ali had on him is undeniable. Had Lee lived, it is almost certain that the pair would have crossed paths, but his untimely demise meant that their acquaintanceship, much like this fan-fueled superfight, would be confined to fantasy. What would Ali have made of Lee? Providing the egos didn’t clash, this would have been a match made in heaven. Both struggled through adversity and racism, both transcended cultural and nationalistic boundaries, both were wonderfully charismatic and both were astonishingly gifted in their respective fields.

Whatever the outcome, the “Battle of Icons” would’ve been one hell of an event.