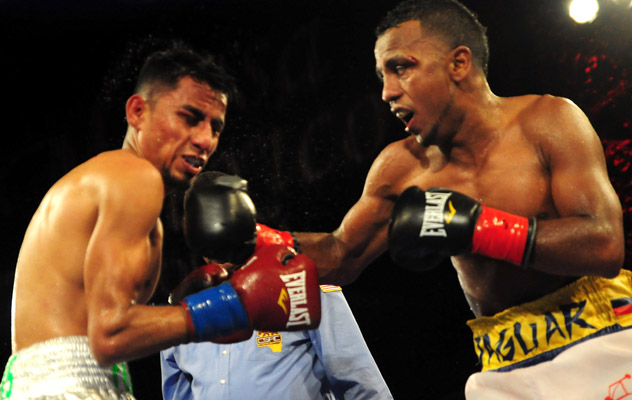 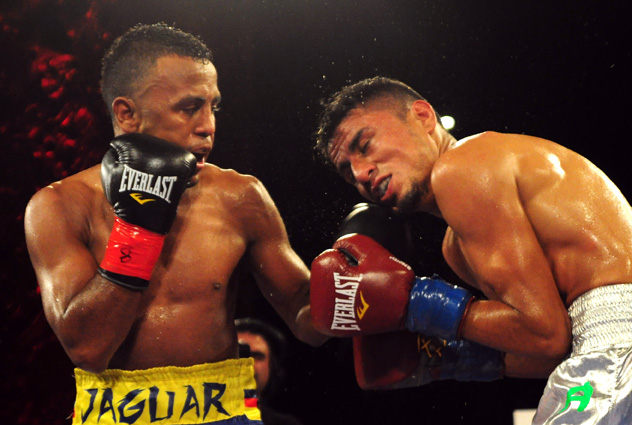 Nightclub, East Coast/West Coast rivalry and lots of police – not a combination you’d normally expect to work well. But Saturday’s edition of “LA Fight Club” brought the coasts together in downtown Los Angeles’ Belasco Theater for a night of peaceful war to benefit the Susan G. Komen Foundation’s quest to find a cure for breast cancer, while a three-fight televised card provided some lively entertainment for the packed house.

In the 10-round main event, bantamweight Oscar Negrete (14-0, 5 knockouts) scored a wide unanimous decision over Jose Bustos, though that said nothing of what was a very spirited effort from the Mexican, who dropped to 11-7-3 (5 KOs).

Negrete eased into Round 1 by cutting Bustos into the ropes and opening up with body-to-head combos or just leading with arching overhead rights. The Colombian looked pretty comfortable by Round 2 and began to put more heat on his shots while Bustos fought to stay in open territory.

By Round 3, supernovas of sweat were flying off Bustos’ head every time Negrete connected, and any notion of competition was draining from the fight. Bustos rallied in Round 4, though, and in Round 5 a cut had opened up above Negrete’s left eye. Negrete continued to score, though less often and with a greater look of concern, while Bustos’ confidence seemed to swell.

Negrete re-dedicated himself and took control again in Round 6 but still ate some eye-catching uppercuts from Bustos. Bustos again swung the fight briefly back in his favor in Round 8 with a right hand that knocked Negrete’s mouthpiece out. But Negrete’s deeper toolbox plainly trumped Bustos’ heart in the final two rounds. The skill discrepancy became more evident as Negrete saw the victory ahead and Bustos began showing signs of fatigue. Scores were 100-90, 99-91 and 99-91. 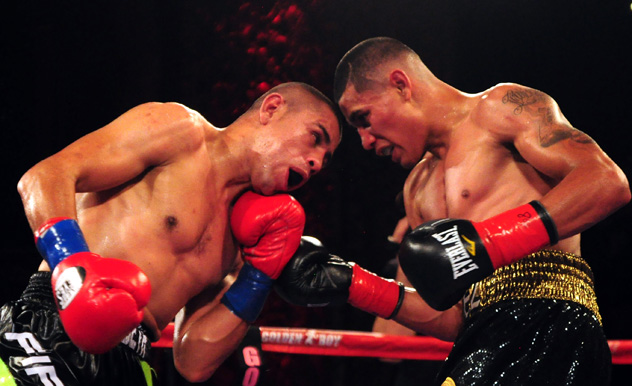 The eight-round co-main event was an all-action demonstration of grit from featherweights Emilio Sanchez (12-0, 8 KOs) and Hugo Partida (21-8-2, 16 KOs), which Sanchez won by unanimous decision.

In Round 1, Sanchez favored a jab-first attack while Partida went more for lead-off straight rights and hooks to the body. Sanchez had most of his success with punches from the outside, stunning Partida with a good one in Round 3, but when they found themselves in close quarters, which was often, there were some terrific exchanges.

Partida continued to concentrate on a body attack and by the end of Round 3 appeared to be reaping its rewards as Sanchez’s activity dipped somewhat. It was back to business in Round 4, though, as Sanchez began to sidestep Partida and deliver body shots of his own. The round ended with Partida needing to be torn away from flurrying on Sanchez in the corner.

Round 5 was a display case for Sanchez’s accuracy and power, most effectively in the form of uppercuts that dislodged Partida’s mouthpiece. He also had Sanchez on the end of some wicked hooks while Sanchez’s punches began to have more of a desperate flair. His mouthpiece was sent flying again in Round 6. Just when it seemed like his chin should crack, though, Partida would summon another charge and maintain the don’t-look-away-for-an-instant pace of the fight.

In Round 7 Partida – who has become a trusted measuring stock for Golden Boy prospects, his last two fights against Julian Ramirez and Joseph Diaz – punished Sanchez’s body again on the ropes. He even appeared to be overpowering an exhausted Sanchez in Round 8 as they led up to a blurred exchange of hooks to close the fight. The judges favored Sanchez by scores of 79-72, 78-73 and 78-73.

In the first televised bout, Miami light heavyweight Niko Valdes (2-0, 2 KOs), 23, had his way with Michael Andrews (0-2) en route to a fourth-round TKO. Andrews tried but failed to make an early impression on Valdes, whose lead right hooks and body jabs from his southpaw stance were soon joined by straight lefts that staggered his shorter opponent.

The display of power continued in the following rounds as “Baby Face,” who often kept his lead hand low with a Mayweather-esque lack of concern, knocked his foe around the ring while Andrews’ corner shouted, “Hey Mike, let’s not get hit no more!” Good advice, but not enough. Just before the beginning of Round 4, Andrews was called aside by the ringside physician, who appeared to be concerned by damage to his nose, and the decision was made to end the fight.

In the evening’s first three-round cop-vs-cop bout, light heavyweight Alex Cintron (NYPD) defeated John Byun (LAPD Southwest Division) by third-round stoppage. Byun flailed valiantly and attempted to apply pressure, but the much taller and more skilled New Yorker stayed calm and found opportunities to deliver his more powerful blows. Byun had received two standing 8-counts and a bloody nose by the end of Round 2, and the end came not long after the start of Round 3.

Next, in a cross-town rivalry, it was the shorter fighter who prevailed, as junior featherweight Dre Fonseca (LAPD – Northeast Division) used her superior mobility to get in, deliver single jabs or one-twos punctuated by good overhand rights, then get out of range against Isabel Reyes (City of Angeles – PAL Program). The action got closer with more infighting in Round 3, but Fonseca’s cleaner, stronger punches garnered a unanimous decision by scores of 29-27, 30-27 and 30-27.

Eriverto Montano (LAPD – Foothill Division) and Jonathon Alvarez (NYPD), who weighed in at 160 and 170 pounds, respectively, both had their moments with clean shots in the first two rounds of a spirited battle. By the third they were both arm-weary and the action got a little sloppy, but it was Alvarez who edged it with a split decision by two scores of 29-28, with the third card going 29-28 in Montano’s favor.

In bout number four, Dustin Rodriguez (Santa Monica Fire Dept. – EMT Division) defeated Billy Ramirez (NYPD), who weighed in at 169 to Rodriguez’s 160.5, by unanimous decision. Rodriguez came out blazing with effective combinations and dodged his slower opponent’s attacks well, but looked to be a little blunted by Ramirez’s size and strength by the end of the round. Not so in Rounds 2 and 3, which each saw Ramirez receive a standing 8-count after getting caught by Rodriguez’s right hand. Scores were 29-28, 30-27 and 30-27.

Light heavyweight Dennis Burgess (NYPD) clubbed out a unanimous decision win against Brian Petrella (Pasadena PD) in the fifth fight of the night. The most effective punch in Round 1 was Burgess’ left hook. In Round 2 he added body shots to the mix and stuck with the recipe in Round 3, by the end of which Petrella was searching for more breath around the edges of his mouthpiece. Sometimes you only need to hear the punches to know what’s happening. All three judges scored it 30-27.

Heavyweight Luis Pena (Oxnard – PAL Program) won a hard-fought split decision against Carlos Rosas (LAPD – Newton Division). You might not have expected it from looking at his vaguely defined physique, but Rosas – who outweighed Pena by 269 to 218 pounds on the scale, looked light on his feet while delivering the much heavier blows in Round 1. Pena received a standing 8-count in Round 2 but came back strong; he outworked and outlanded Rosas in the final round but was unable to hurt his opponent, whose punches produced more of a rag-doll effect when they landed. The cleaner technique got the judges’ nod, though, with scores of 30-27 and 29-28 for Pena and 29-28 for Rosas.

And in the final battle of the undercard, Daniel Rosales (LAPD – Southwest Division) won a unanimous shutout decision over Nelson Cordero (NYPD). Rosales buckled Cordero’s legs with a left hook about a minute into Round 1 and then caught him again for a standing 8-count just before the bell. Cordero spent much of Round 2 hanging on to Rosales’ waist to avoid the switch-hitter’s attacks, and in Round 3 was simply overpowered and outfought.