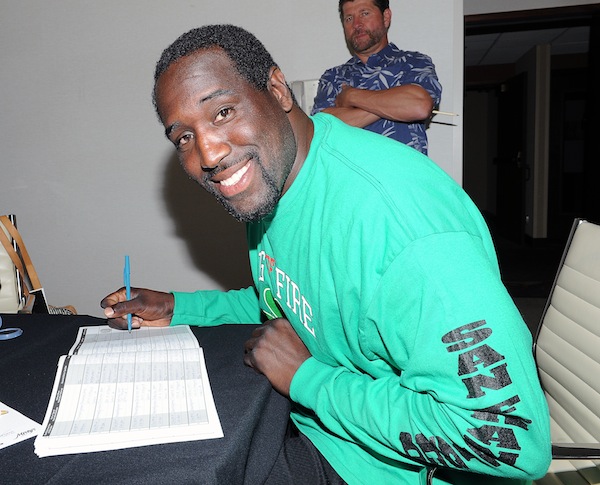 ONTARIO, California – They keep lining them up and heavyweight LaRon Mitchell keeps mowing them down and Epifanio Mendoza was his latest victim.

Mitchell dropped Mendoza in the third round, eventually getting the stoppage win in tha same round late Friday night at the Doubletree Hotel in this Los Angeles suburb.

Mendoza figured to be a modest step-up in opposition for Mitchell. Mendoza has been a pro since November of 1999 and unsuccessfully challenged Chad Dawson for his light heavyweight title in 2007.

Mitchell, a full-time junior high teacher in the Oakland area, is a 2012 US Olympic Boxing Trials runner-up. He holds amateur wins over Donovan Dennis and Dominic Breazeale, the latter having lost a bid for the IBF heavyweight title against beltholder Anthony Joshua on Saturday night.

The southpaw Mitchell, who held a height and strength advantage over Mendoza, was able to connect more between the two fighters. Mendoza was at his best when he could get on the inside of Mitchell’s guard, resulting in Mitchell smothering himself, at times.

As the bout progressed, Mitchell created space between himself and Mendoza, allowing him to land more to the head with left and right hands.

The end came in the third round when Mitchell dug a left hand to the soft body of Mendoza, dropping him against the ropes. Mendoza beat the count but was in no shape to continue, prompting referee Raul Caiz Sr. to stop the fight at 52 seconds.

Midway through the first round, Ramirez dropped Ituarte with a counter left hook to the head. Undaunted, Ituarte scored a knockdown of his own in the third round, dropping Ramirez with a lead overhand right to the head.

Ramirez swung momentum his way in round five, dropping Ituarte again with a left hook upstairs.

Ramirez was not able to capitalize as he chose to counter Ituarte. Both fighters had their moments in the last two rounds but Ituarte was the busier fighter, beating Ramirez to the punch.

– The six-round bout between junior welterweights Manuel Mendez (11-1-2, 7 KOs) and Ricardo Maldonado (6-5-1) abruptly ended at 2:10 of the second round when Mendez was unable to continue due to a cut above his left eye from an accidental clash of heads. Because less than four rounds were not completed, the bout was declared a technical draw.

– Welterweight Eridanni Leon (3-2, 1 KO) stunned Rasheed Olawale Lawal (1-4-1) with a barrage of punches in the fourth round, prompting referee Sharon Sands to stop the fight at 1:31.

– In the opening bout of the Thompson Boxing Promotions card, bantamweight Rudy Garcia (2-0, 1 KO) won a four-round unanimous decision over Rafael Rivera (2-9). All three judges scored the bout 40-36 in favor of Garcia.

Francisco A. Salazar has written for Boxingscene.com since October of 2012 and has covered boxing in Southern California and abroad since 2000. Francisco also covers boxing for the Ventura County (California) Star newspaper, RingTV.com, BoxingScene.com and Knockout Nation. He can be reached by email at [email protected] or on Twitter at FSalazarBoxing.