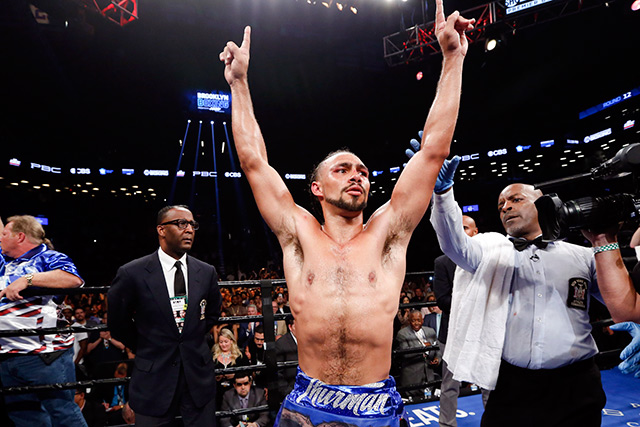 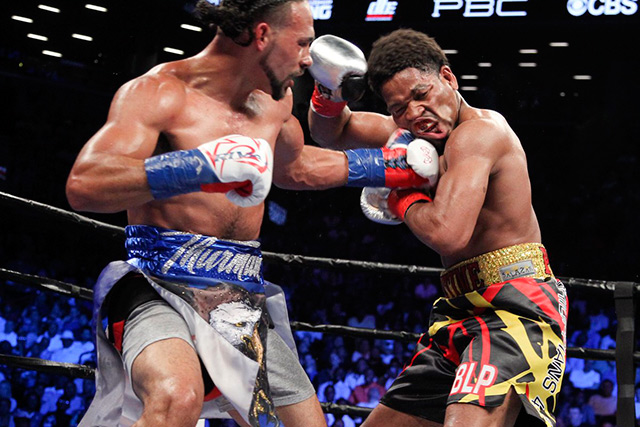 Keith Thurman: Thurman on Saturday wasn’t the boxer he aspires to be, a beautiful fighting machine with breathtaking speed and power who overwhelms his opponents. Against Shawn Porter, he was as gritty as he was good. And that’s fine. That’s what it takes to win fights at the highest level sometimes and fans appreciate it. The WBA welterweight titleholder had to dig deep to get past his challenger, a swarming beast and one of the best fighters in the world. He consistently bullied Thurman into the ropes, banging away in that position as he had done when he upset Adrien Broner a year ago. Thurman survived the tactic, though, banging, holding, spinning out of danger, whatever it took to take the advantage away from Porter. And that’s when Thurman shined, catching Porter with crisp, eye-catching shots as he rushed in or sharpshooting from the outside. The punch stats were close but Thurman clearly landed the cleaner punches, which probably swayed the judges: All three scored it 115-113, as I did. It certainly wasn’t the kind of statement Thurman (27-0, 22 knockouts) had hoped to make on free national TV; some experts and fans will continue to have doubts about his future. At the same time, it was well-earned, important triumph over a highly rated, determined opponent in his prime. That type of victory is rare these days and should be cherished even if it came in a close fight. The breakthrough performance will have to come later.

CBS had a good day Saturday. Dominic Breazeale put up enough resistance to make his fight with Anthony Joshua interesting on Showtime, a CBS subsidiary. And Thurman-Porter was a gem. ÔÇª Porter (26-2-1, 16 KOs) lost in the ring but not in the arena of public opinion. The former IBF titleholder battled on even terms with a fighter some believe could emerge as the next dominating 147-pounder. And one could argue that he did enough in the fight to earn the decision; most of the rounds were close. In the end, he came up just short on the cards – as he did when he narrowly lost his title to Kell Brook by a majority decision in 2014 – but was impressive in the process. He’ll give any welterweight in the world hell. ÔÇª IBF heavyweight titleholder and physical freak Joshua (17-0, 17 KOs) did what everyone expected him to do on Saturday in London, which was to knock out overmatched Breazeale (17-1, 15 KOs) and retain his belt. It wasn’t the cakewalk the Charles Martin fight was, though, as a tough, determined Breazeale refused to go easily. That proved to be an opportunity for Joshua. The patience with which the big Briton broke Breazeale down belied his relative lack of experience. He never panicked, never lost confidence when his punches failed to put Breazeale away in the early rounds. He simply continued working intelligently until the job was done. The end came at 1:01 of Round 7. And the fact he got in six-plus rounds will help in his development. Only one of his opponents has reached the fourth. What’s next for Joshua? His mandatory challenger is rising Joseph Parker, who would be Joshua’s biggest challenge. Another possibility is David Price, who isn’t likely to stand up to Joshua’s power. And I like a Joshua-David Haye matchup. All options are intriguing.

Chris Eubank Jr. (23-1, 16 KOs) also did what he was expected to do on the Joshua-Breazeale card, which was to stop unbeaten but unknown Tom Doran (17-1, 7 KOs). Next up for Eubank could be a much more serious proposition: Gennady Golovkin. The fighters’ promoters say a deal to fight as early as the fall in London is close. It’s not Golovkin-Canelo Alvarez but it’s an interesting matchup, particularly in the U.K. Eubank was cocky during and after his victory over Doran, which ended in the fourth round. I’m not sure he would be quite as full of himself after a fight with Triple-G. ÔÇª George Groves (24-3, 18 KOs) recorded arguably his biggest victory since he outpointed James DeGale in 2011, a one-sided decision over tough former middleweight contender Martin Murray (33-4-1, 16 KOs) on the Joshua-Breazeale card. That’s three consecutive victories for Groves since he lost a decision to Badou Jack for Jack’s WBC super middleweight title. Groves has lost in each of his three world title fights. He appears to be heading for at least one more shot. ÔÇª Jarret Hurd (18-0, 12 KOs) and Oscar Molina (13-1-1, 10 KOs) gave fans an exciting junior middleweight fight on the Thurman-Porter card, which ended with Hurd winning by knockout in the 10th and final round. I was impressed with Hurd, whose combination of skill and ruggedness was too much for Molina to handle. He has a bright future. And Molina, who also is talented, will be back. The biggest fail in that fight belonged to referee Ricky Gonzalez. I don’t want to be too hard on an official trying to protect a fighter but he jumped the gun when he stopped the fight. Molina wasn’t hurt. ÔÇª Jason Sosa (19-1-4, 15 KOs) proved his draw with Nicholas Walters in December was no fluke, rallying to stop talented Javier Fortuna (29-1-1, 21 KOs) in the 11th round of their junior lightweight fight Saturday in China. The Jersey fighter, who was losing on the cards, hurt Fortuna in the 10th and finished the job in the following round.