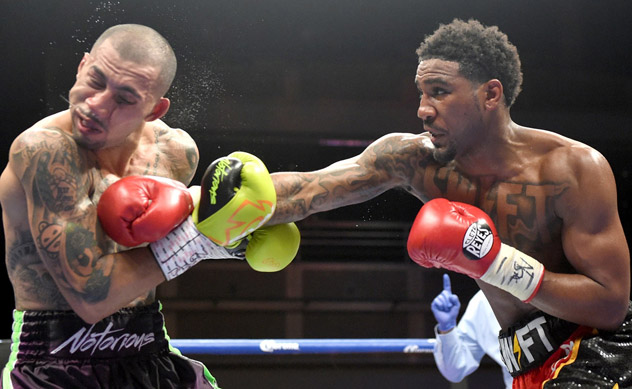 Jarrett Hurd proved with a stoppage win over Oscar Molina on Saturday that his last fight wasn’t a fluke.

Nearly eight months after Hurd stopped previously undefeated Frank Galarza in an eye-catching performance, Hurd stole another fighter’s invincibility with a dramatic tenth-round TKO of Molina in the co-feature of Thurman-Porter at Barclays Center in a junior middleweight bout after he had dropped him earlier in the fight.

The crowd booed the stoppage but it was the correct decision. Molina was taking a slow beating and was in survival mode. “I can’t see what the ref sees,” Hurd said. “He was hurt a couple of times. I don’t think it was a bad stoppage. Molina is a very tough guy who just kept coming through.”

The junior middleweight fight was elevated to the CBS co-feature when former three-division champion Abner Mares couldn’t get licensed by the New York State Athletic Commission because of an injury, causing his fight with secondary titleholder Jesus Cuellar to be scratched.

“Molina is a great fighter,” Hurd said. “This is definitely a big win for my career. He was taking a lot of shots, but he knew how to survive. This fight here puts me up with the top contenders in the division. I felt like I could have gone three or four more rounds. I was getting stronger as the fight went on.”

Hurd, of Accokeek, Maryland, dropped Molina with a right uppercut midway through the first round, suggesting it might be a quick fight. Molina fell straight down but got up right away despite the heaviness of the blow. Molina of Norwalk, California, weathered the storm and managed to get into the fight by landing the occasional overhand right to gain some respect.

After a few rounds, the fight devolved into a patient slugfest on the inside, with both men standing right in front of the other and digging in shots. Hurd kept trying to land that right uppercut while Molina was coming over the top with winging shots. Hurd appeared to stun Molina with a left hook in the eighth round as Molina lay against the ropes. Molina tried to collect himself but Hurd landed several more clean shots to punctuate the round as Molina appeared tired and out of answers and was shaking his head as he walked back to his corner.

“We wanted to get him out early because we knew that he had a lot of ring experience,” Hurd said. “We had to break him down first. I’m very happy. This was the first fight on CBS since a Muhammad Ali fight. I made history today. This is a blessing. Me and my team have done a great job.”

Molina fell to the canvas in the tenth round with Hurd rushing in, trying to finish him. It was ruled a slip but Molina was clearly tired and on his final legs when the referee stopped the fight after several more clean punches.