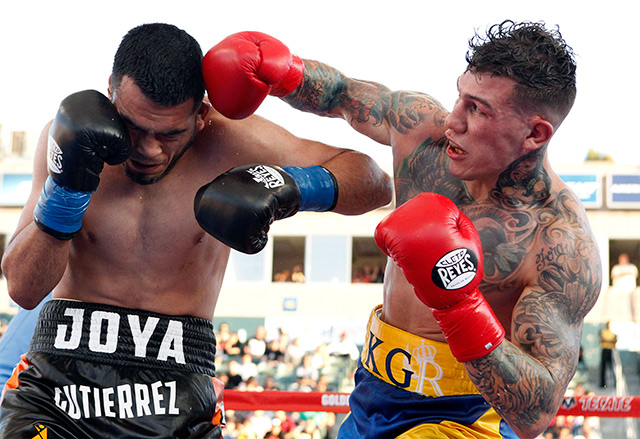 “King” Gabriel Rosado edged Antonio Gutierrez in a rough and rugged middleweight contest Saturday night at the Stub Hub Center in Carson, California, on the undercard of Francisco Vargas-Orlando Salido.

While all three judges favored Rosado with scores of 95-94, 96-93, and 95-94, Gutierrez was still able to get the same satisfaction of victory with his valiant effort.

It didn’t take long for Rosado and Gutierrez to live up to the expectations of this fight. It was a toe-to-toe battle from the opening bell, and Rosado got the better of his Mexican opponent with a swift start. Plenty of lead right hands were successful for the Philadelphia native and it took a couple rounds for Gutierrez to grasp any sort of timing. Spacing wasn’t the issue, but Rosado did a good job of getting close and leaning all his weight on Gutierrez after digging hooks to the body while infighting.

Fighting out of Tijuana, Gutierrez kept coming forward despite getting hit early and often, but everything changed in the fourth round.

Gutierrez, 21, stepped on the gas pedal and began to mug early in the fourth, and then out of nowhere in the middle of the round, Rosado was dropped by a right hand. Rosado, 30, was off-balance when the right hand landed, and after he got up immediately he shrugged it off with a smile and nod to his corner for assurance. What proceeded to happen was an all-out war, making the their prior exchanges seem like patty-cake, and once the round ended, the crowd roared.

With the predominantly Mexican crowd fully engaged, if they weren’t already, chants of “Tijuana” resonated the outdoor arena, and it seemed to inspire Gutierrez. He slowly began to bully Rosado, who, after a few rounds of punishment, began to elude the infighting and force his opponent to chase him around the ring. With Rosado now in retreat, Gutierrez had all the momentum going into the late rounds, and had the crowd behind him. There was only one way to cap off the fight, and it was with a war of attrition for three minutes.

Once the fight was complete, both men were raised up by their trainers. Neither had a clue if they’d won, but both certainly made a case.

“I was hoping this fight would go a little differently,” said Rosado (23-9, 13 KOs). “I wasn’t expecting to get knocked down. I know that I was making some mistakes, and he was coming at me really hard. I know that I have a lot of support out here. This was a learning experience for me.”

Once the decision was read, the crowd booed emphatically, but Gutierrez still felt compelled to stand on the turnbuckle and raise his arms, and when he did, the crowd cheered absolutely.

“I had studied Rosado before this fight, and knew he was a fighter with great ability and punching power,” said Gutierrez (20-2-1, 9 KOs). “This has been the most difficult fight of my career thus far, but I feel that I was very impressive and dominated many of the rounds tonight. When I dropped him in the fourth round, I was surprised because I was just doing what my corner advised. And it worked. I don’t agree with the decision. I feel I gave the better fight tonight, and the crowd agrees with me.”

The scorecards may have reflected a dominant win for the 20-year-old from Buena Park, California, but what they didn’t show was the crafty effort coming from the Filipino opponent. Gemino (12-7-1, 5 KOs) had his back against the ropes for most of the fight thanks to Gonzalez’s forward pressing style, but he might have stayed there because he was so crafty in eluding the powerful right hand of “Chimpa.”

“My opponent was really tough and was able to take lots of punches, which was challenging,” admitted Gonzalez (14-0, 12 KOs) after the win. Despite his frustrations, Gonzalez was still able to wail on Gemino with left hooks to the body and head, and his pace never let up into the later rounds. Gemino, who was a last-minute replacement, also snuck in some counter right hands from time to time, but they never hurt Gonzalez and were too few and far between to conjure any love from the judges.

“Every fight is a learning experience for me,” Gonzalez continued. “And I’m extremely happy I was able to get tonight’s victory against this tough guy because that is what I came to accomplish.”

Nick Arce stayed undefeated after receiving a unanimous decision win over Francisco Dominguez. In fact, it was a shut-out, receiving 60-54 scores from all three judges ringside in what was a six-round junior lightweight contest.

After gauging his opponent with a jab in the opening round, Arce (8-0, 6 KOs) got past the feeling-out process in the second round and began carving his opponent with an aggressive, yet methodical attack. Just about every power shot he threw preceded his jab, but his combinations never went over three punches. They were quick shots, however, and after the body and head shots came, Arce often used his lateral movement to prevent any attack from Dominguez.

Dominguez (8-10, 2 KOs) seemed frustrated by the movement, and a considerable amount of his shots hit Arce’s arms. And although Arce controlled every aspect of the fight, none of the head and body shots seemed to hurt his Mexican opponent.

“My opponent was a tough guy who could take a lot of punches,” said Arce after the win. “I feel good about this fight. This is what I came here to do.” When compared to his last fight, a toe-to-toe war with Luis Lizarraga Jr., a dominant win without any presence of danger is exactly what the 19-year-old prospect needed.

Kicking off the RingTVLive.com stream, East Los Angeles native Jonathan “Thunder” Navarro looked impressive in his beatdown of Marc Torres, knocking him down twice en route to enforcing a stoppage in the second round.

Navarro (6-0, 5 KOs) welcomed the slugfest Torres was presenting in the opening round, and his left hooks to the body and head were the poignant shots that crumbled his foe. An accumulation of those shots sent Torres to a knee toward the end of the first for a knockdown.

Torres (4-2, 1 KO) was still game, however, and still felt compelled to come forward despite Navarro being sharp with his combinations. The slugfest continued into the second, and midway through a left hook to the head of Torres sent him to the canvas. This time it was his undoing. With Torres hurt, referee Jack Reiss disregarded his 10-count and waved off the fight at the 1:21 mark.

Junior middleweight prospect Alexis Rocha (3-0, 2 KOs) was taken to the scorecards for the first time by Anthony Woods, 0-5, but pitched a shutout in the unanimous decision win with scores of 40-36 from all three judges ringside.

San Diego, California’s Genaro Gamez (2-0, 2 KOs) blasted Juan Bryand (1-4) with body shots in the opening round to score a knockout win. The lightweight contest was scheduled to go four rounds.

In the opening bout of the Golden Boy Promotions card, Oscar Duarte (5-0, 3 KOs) received a unanimous decision victory over Luis Lizarraga Jr, (5-9-1, 2 KOs) in a lightweight contest. All three judges ringside scored it the same, 40-35, in favor of the Parral, Mexico, native after he scored a knockdown in the final round.