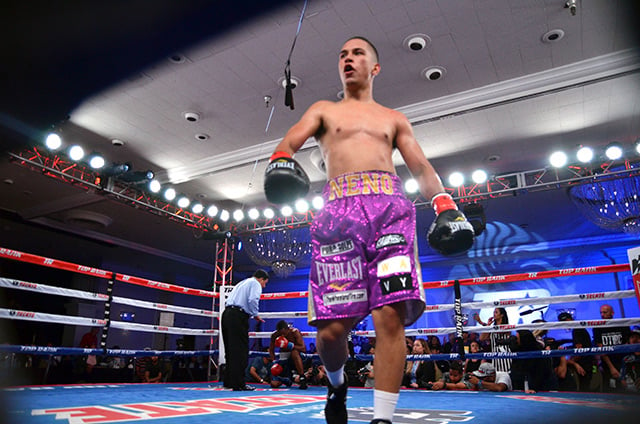 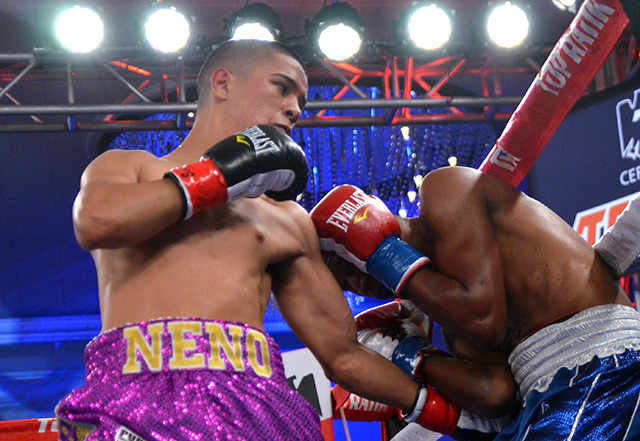 STUDIO CITY, California — Saul “Neno” Rodriguez forced Daulis Prescott into submission in the seventh round, knocking him down twice before warranting a stoppage by the referee on Saturday. The lightweight contest was the main event of a “Solo Boxeo” card televised by UniMas, and promoted by Top Rank at the Sportsman’s Lodge.
Rodriguez (20-0, 15 knockouts) couldn’t hide his ambition to knockout his Colombian counterpart. From the jump, the Riverside, California native threw his right hand with bad intentions, and while it landed early and often, Prescott was able to use savvy tactics in order to survive and sometimes frustrate the 23 year old. With his right hand cocked, Rodriguez set up his power shot with some feints and a steady jab early on, but when unleashed, the right hand came with enough force to pierce through Prescott’s guard. By the third round, Prescott, 29, was forced to hold Rodriguez in order to disrupt any rhythm he conjured.
There was some frustration shown by Rodriguez as he glared at referee Raul Caiz Sr. with disgust whenever they were in the clinch. Now forced to change a facet of his game, Rodriguez then began to impose a left hook around Prescott’s guard, and by stepping to his left, it didn’t give him a chance to hold after he got hit. Those left hands from Rodriguez also found the body of Prescott, and he began to use his feet much more once they came into play. Still, Prescott wanted to discourage Rodriguez, and in the waning seconds of the fifth round, he used dirty tactics by hitting him after the bell. 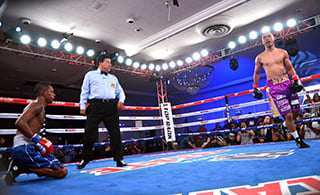 In the opening bout of the Top Rank Promotions card, Maxim Dadashev got the TKO victory over Rashad Bogar after the referee called a halt to the contest in the fourth round. The junior welterweight contest was scheduled for six.

Dadashev (2-0, 2 KOs) overcame an early onslaught of wild overhand power shots from Bogar by keeping his composure in the opening round. Contrary to his overzealous opponent, Dadashev relied on a steady jab to precede his power right hand, and once in rhythm, he kept Bogar out of it with a bevy of punches. Bogar (4-9-1, 2 KOs) was so bewildered, there were plenty of occasions where his upper body found itself outside the ropes after ducking Maxim’s shots. It halted time by referee Zac Young, and by the fourth time it happened, it seemed deliberate. Regardless, Dadashev started to beat up Bogar enough that warranted Young to wave of the fight 34 seconds into the fourth round.