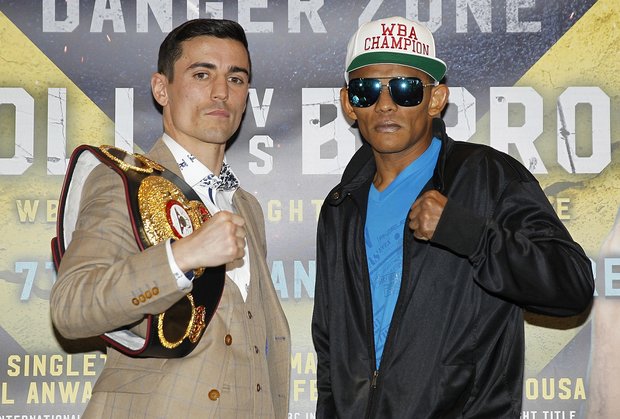 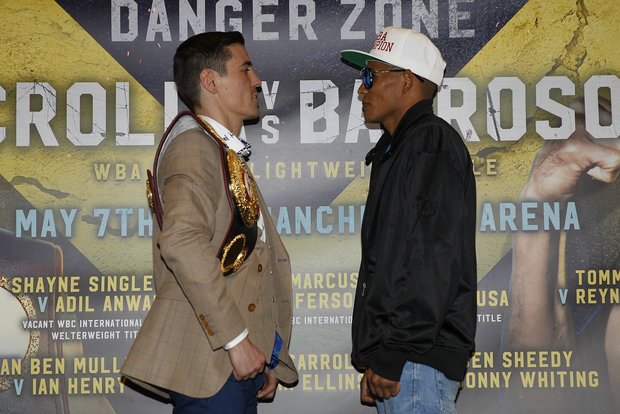 Popular British lightweight Anthony Crolla is as charming and personable as any fighter you could ever encounter but those characteristics will be put on hold when he defends his WBA title against feared Venezuelan power-puncher Ismael Barroso in Manchester, England, on Saturday.

Crolla, who is rated No. 4 by THE RING at 135 pounds, won the title last November with a brilliant fifth-round stoppage of Darleys Perez. The finishing blow, a bursting left hook to the body, not only finished his opponent; it signaled the end of a nightmare year which would have brought many a prizefighter to his knees.

In Dec. 2014, while foiling a burglary attempt at a neighbor’s home, Crolla was struck on the head by a concrete slab, which resulted in a fractured skull and a broken ankle. Incredibly, only seven months, later he was battling Perez to a controversial draw and the dream ending in their rematch had Manchester fight fans in a party mode not seen since the glory days of Ricky Hatton.

“It took a few days to sink in,” said Crolla who was voted THE RING’s Most Inspirational boxing figure of 2015. “I couldn’t sleep after the fight, there was a lot of satisfaction and obviously I was very proud. To dream of achieving something for so long and have it come true is just unforgettable.

“There was also a great deal of relief and I think you seen that by my reaction when I won the title. A lot of emotion was coming out because of all the pressure that came with trying to become world champion. Still, I don’t want to stop there and I won’t be giving this world title up easily.”

Crolla never gets it easy. Only three weeks after realizing his life’s work, the affable 29-year-old sat ringside as Ismael Barroso chewed up the remains of another British stalwart, Kevin Mitchell. The slaughter was over in five rounds and Crolla’s mandatory assignment had arrived in the form of an unbeaten southpaw with serious power in both fists.

“It’s a tough old first defense,” said Crolla in earnest. “A lot of fighters get a nice comfortable first defense but I’m really looking forward to the challenge. I’ll receive a great deal of credit for beating Ismael Barroso and I just need to make sure I perform on fight night.

“I’ve never done things the easy way and this is no different. Barroso is one of the most feared lightweights in the world and he deserves his shot. I’m proud to be a champion and I’m happy to defend against a great challenger. I’ve never ducked anyone in my career and I’m not going to start now.”

One could be forgiven for believing that Crolla has been avoiding left-handers but that’s just the way things have worked out all by themselves. When the bell rings on Saturday, the home fighter will come out of his corner to engage with the first southpaw he has faced in almost nine years. The date was Oct. 2007 and the opponent was popular journeyman Johnny Greaves.

“Bloody hell, that was a while back,” laughed Crolla. “I remember fighting a guy called John Baguley who would switch a bit but yeah, Johnny Greaves was the last full southpaw I fought as a professional. He ended up having 100 fights.

“It doesn’t really matter because I’ve sparred plenty of southpaws down the years and we’ve had great sparring for this fight. You have to change a few things but I’m not really thinking about it too much if I’m being honest. I’ve had a great camp, plenty of notice and I’m ready for it.”

Despite the ruthless finish against Perez, Crolla (30-4-3, 12 knockouts) is, first and foremost, a smart boxer with fluid skills. The Englishman possesses adept lateral movement and an educated left jab which sets up combination punching and piles up points. The consensus among experts is that he must offset Barroso’s power with these attributes and frustrate him.

“When you look at Barroso’s fights they’re very one-sided and he’s got opponent’s fighting at a pace that he’s comfortable with,” said Crolla. “I need to take him out of his comfort zone, use my boxing ability and capitalize with sharp counters.

“Also, he’s been in fights that have been scheduled for 12 rounds but he’s never been beyond eight in his entire career. I’ve gone the distance a few times and that’s definitely an advantage for me.”

Most odds makers believe a new beltholder will be crowned on Saturday but the questions go both ways. Can Crolla handle Barroso’s power? Can Barroso deal with Crolla’s finesse? Can Crolla adjust to the southpaw stance? Can Barroso perform in the championship rounds during a competitive fight?

It’s an intriguing clash, which the champion feels is destined to go late.

“I always look to go 12 rounds and it’s likely that this fight goes the distance but I wouldn’t rule out a late stoppage,” Crolla said after some deliberation. “I think it will be a long night but, either way, I’m very confident that I get the win. I need to be switched on from the start and, once I get into a rhythm, my skills will take over.”