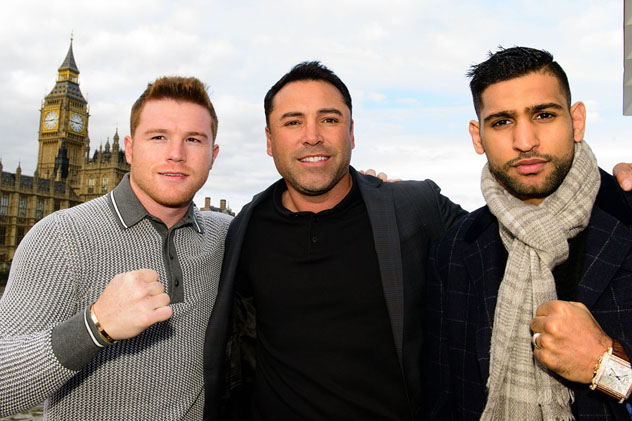 02
May
by Coyote Duran

As far as characters go, in the context of the age we live in, they are not ideal sorts in trying to promote their events.

By all accounts, RING middleweight champion Canelo Alvarez is an ultra-gent. I would be wickedly surprised if he ever misses an opportunity to open a car door for a gal and I have never seen or heard him so much as hint at being contentious or sarcastic with media. The Mexican is always composed and dignified and, in a time when negativity and drama and beefs are king when it comes to commanding attention and eyeballs, he is way off the pound-for-pound list. He will tell you his camp is going well; his chances to win are swell but if you want a sound bite of him questioning the heart or the chin or whatever on his foe, you need to find it elsewhere.

Amir Khan has an army of haters, as compared to Canelo, and I admit I haven’t quite figured out the swollen numbers there. Khan, same as Canelo, is classy and patient in dealing with press.

His haters take issue with a perceived arrogance. They second-guess his decision-making as he looks to set his schedule in this final third of his pro career. He wants mega-fights against marquee names and admits it but can be somewhat clumsy as he tries to explain why he eschews a compelling domestic tilt against Kell Brook. But no, he cannot be relied upon for tomfoolery, for clever take-downs which are easily disseminated in 140 characters or less.

Thus, the drama that makes their Saturday clash attractive, to the million-plus fans the promoters are hoping will press the “Buy” button to watch the pay-per-view, is coming the old fashioned, organic way.

Legitimately, people don’t know who will win. It’s still the best reason to book a fight and most logical way to sell it.

Days away, more like the bigger guy, figuring that the guy who was a junior welterweight not that long ago will not be able to withstand the assaults from a real-deal junior middleweight. Khan’s defense is leaky and Canelo will disintegrate it, many say. But since the fight was announced, in the slickest, out-of-nowhere match-up made since Michael Jackson married Elvis Presley’s daughter Lisa Marie, more fans are seeing Khan having a solid chance to win.

Proper credit for the shift in sentiment goes to Oscar De La Hoya doing his job, which is to make one curious enough as to who will win that one will also pony up to see how it plays out live. Here are some excerpts from Oscar, about fights past, when speed (aka Khan) trumped power (aka Canelo).

Oscar De La Hoya on “Big” George Foreman vs. Muhammad Ali:
“George Foreman had a record at the time of 40-0, 37 KOs, so he was unstoppable, he was knocking everyone out. Muhammad Ali used his speed, used his great footwork and he used the famous ‘rope-a-dope’ – He lured Foreman into the trap and knocked him out.
“Muhammad Ali was the clear underdog in this fight. Foreman was knocking everybody out, annihilating (Joe) Frazier, (Ken) Norton and those were Ali’s rivals. Ali was able to pull off the biggest upset at the time by knocking out George Foreman.”
Oscar De La Hoya on Sugar Ray Leonard vs. Marvelous Marvin Hagler:
“1987 and another classic speed vs. power battle. Speed prevails in this one against the most feared fighter on the planet, the great Marvelous Marvin Hagler, with tremendous punching power. Speed was just too much for power on that night.”
Oscar De La Hoya on Julio Cesar Chavez vs. Meldrick Taylor:
“Julio Cesar Chavez, Meldrick Taylor, 1990: A classic battle of speed vs. power. Taylor, with the speed, was beating Chavez every single round, every single minute, but, at the same time, he was taking a lot of punishment.
“In the 12th round, guess what happens? Chavez knocks him out with two seconds left and Chavez wins the fight.”
Oscar De La Hoya on De La Hoya vs. Ike “Bazooka” Quartey:
“1999, another classic battle of speed vs. power. My lighting-fast jab and with combinations, I was able to drop him. They called him the ‘Bazooka’ – He was a tremendous puncher but, on that night, speed prevailed. I needed the 12th round to win the fight and I was able to pull it off.”
Oscar De La Hoya on De La Hoya vs. “Ferocious” Fernando Vargas:
“In the first round, I had to weather the storm. He came right at me, almost knocked me outside the ring, almost knocked me out. I was able to come back in the later rounds and use my speed and my intelligence and we were able to pull off the victory from the bigger and stronger Fernando Vargas.”
Readers, talk to us. File your prediction here and now. Who thinks Khan can use that hand speed edge, surprise Canelo with quick combos, get in, get off and get out enough to take a decision? Who thinks that Khan cannot withstand a 12-round grind and eventually pay dearly for this gamble and have his senses scrambled by the red-headed attacker?
Michael Woods often has his senses scrambled by a red-headed attacker. Most of us know her as his kindergartner, Jules. But, boy howdy, is she wiry.