A bad night for judges in Washington D.C.: Weekend Review 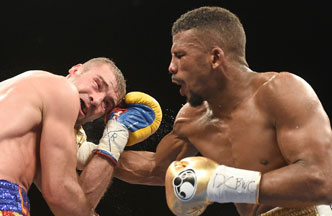 Badou Jack vs. Lucian Bute: I had a short story on the Jack-Bute result almost completely written and ready to post on RingTV.com by the end of their fight Saturday in Washington, D.C. All I had to do was plug in the scores that would give Jack a one-sided unanimous decision, which the WBC super middleweight titleholder had earned. Then Jimmy Lennon Jr. announced the scores: Stephen Rados had it 117-111, which reflected what happened in the ring. However, Glen Crocker and Omar Mintun Sr. scored it 114-114, making it a majority draw. Huh? Jack thoroughly outboxed Bute for most of the bout, landing consistently to the challenger’s head and body while maintaining a tight defense, which Bute had a difficult time penetrating. Bute rallied in the last three rounds, when Jack seemed to tire, but it seemed to be much too late for him dig out of a deep hole. Consider the computer stats. Jack connected on 217 of 358 power punches, a remarkable 61 percent; Bute 142 of 557, 25 percent. Jack landed 278 of 703 overall, 40 percent; Bute 179 of 857, 21 percent. That’s what I saw during the fight. Let’s give Bute the 10th, 11th and 12th rounds for the sake of argument. That means he would’ve had to win three of the first nine rounds to earn a draw. Bute (32-3-1, 25 KOs) simply didn’t get enough done to merit that. One round, maybe. Three? No way. I felt for Jack (20-1-2, 12 KOs) afterward. He gave a good performance, although I wonder about his conditioning after his late fade. He deserved to have his hand raised, which would’ve given him successive victories over Anthony Dirrell, George Groves and Bute. What can I say? It was just another bad decision in a high-profile fight, which compromises the integrity of the sport. Once again, the powers that be must be more diligent about training and selecting judges. At least Jack retained his title and will still fight IBF beltholder James DeGale in a title-unification bout later this year. There is some justice.

James DeGale vs. Rogelio Medina: Medina was a late replacement to fight DeGale on the Jack-Bute card, supposedly an easy out for the IBF super middleweight titleholder. The 27-year-old Mexican certainly didn’t fight like that. Medina clearly was not intimidated by DeGale’s amateur pedigree and success as a pro, relentlessly walking down the 2008 Olympic champion and pounding his head and body (mostly his body) every chance he had. DeGale (23-1, 14 KOs) did enough to win a unanimous decision and ensure the showdown with Jack – landing the cleaner, flashier punches to the head as well as plenty of body shots – but, thanks to Medina, he had to pass through hell to do it. His battered face afterward was painful evidence of that. The scores were 115-113, 116-112 and a much-too-wide 117-111 from Tony Paolillo, further evidence of a weak night for D.C. judges. Still, an unknown Mexican became a legitimate 168-pound contender – and perhaps an instant attraction – because of an inspired performance in a losing cause while a victorious titleholder might’ve collected some critics. DeGale didn’t jab enough, he didn’t make Medina pay a price for his aggression enough, he didn’t hurt Medina enough, if at all, even though the Mexican has been down many times. I wondered about DeGale’s punching power going into the fight; nothing I saw on Saturday night changes that perception. All that said, I think DeGale will be fine. He ran into a steamroller in Medina (36-7, 30 KOs). He most likely will have his hands full with Jack, who seems to improve every time out, but the Londoner probably will be favored to win. And he won’t be as sore after that fight as he undoubtedly was after he tangled with Medina.

Bute’s late rally and the unfortunate cards of Crocker and Mintun might have saved the Romanian-Canadian’s career as a relevant fighter. He’ll probably get at least one more important fight because he didn’t lose. ÔÇª Don’t read anything into Floyd Mayweather Jr.’s comments on the Showtime telecast Saturday night. Of course he’s thinking about a comeback. Every retired fighter younger than 50 – and some who are older – is thinking about a comeback. One thing, though: He said he would only return if he makes nine figures (at least $100 million). That could only mean Manny Pacquiao, Canelo Alvarez or Gennady Golovkin. I don’t think he could make that kind of money against anyone else. ÔÇª The Victor Ortiz vs. Andre Berto rematch Saturday in Carson, California, might’ve been an elimination bout: The winner moves on to a big-money fight, the loser is finished. Looks like Ortiz might be finished. Ortiz had put Berto (31-4, 24 KOs) down in the second and was boxing well when he ate a right uppercut and went down in the fourth. Ortiz (31-6-2, 24 KOs) was able to get up but hit the canvas again from a barrage of punches. He barely beat the count but apparently gave referee Jack Reiss no answer when he asked the dazed fighter whether he wanted to continue, prompting Reiss to stop the fight at 1:14 of the round. The victory, which avenged an earlier loss to Ortiz, breathed life into Berto’s career. For Ortiz, it will be difficult to battle back from another loss. He’s 2-4 in his last six fights. If it’s the end for him, I want to wish him well. He is one of the nicest fighters I’ve met in a quarter century of covering boxing. ÔÇª

The Premier Boxing Champions card in Carson was very entertaining. Thomas Williams Jr. (20-1, 14 KOs) took out Edwin Rodriguez (28-2, 19 KOs) in the second round of a crazy light heavyweight slugfest to become a player in the division; featherweight Jorge Lara (28-0-2, 20 KOs) proved he’s for real by destroying former titleholder Fernando Montiel (54-6-2, 39 KOs) in only 1 minute, 37 seconds; and super middleweight/light heavyweight prospect David Benavidez (14-0, 13 KOs) knocked Phillip Jackson Benson (16-3, 15 KOs) out cold in the second round. Whew! ÔÇª Heavyweight Gerald Washington (17-0-1, 11 KOs) might be evolving into one of the better football players-turned-boxers ever, although that’s not saying much. The former U.S. Navy veteran and USC tight end/defensive end outpointed former contender Eddie Chambers (42-5, 23 KOs) on the Carson card. ÔÇª Anthony Dirrell (29-1-1, 23 KOs) provided another knockout worth watching on Friday in Atlantic City, stopping Caleb Truax (26-3-2, 16 KOs) only 1 minute, 49 seconds into their super middleweight fight. Dirrell is as good as any 168-pounder in the world. Andre Dirrell (25-2, 16 KOs) easily outpointed Blake Caparello (22-2-1, 6 KOs) on the same card. I still think Andre Dirrell could give anyone trouble with his boxing ability. ÔÇª Heavyweight Hughie Fury (20-0, 10 KOs) defeated Fred Kassi (18-5-1, 10 KOs) by a seventh-round technical decision Saturday in London. The fight was stopped because of a cut above Fury’s left eye, the result of an accidental head butt. ÔÇª Former longtime bantamweight titleholder Anselmo Moreno (36-4-1, 12 KOs) bounced back from consecutive losses on Saturday in Panama, defeating Suriyan Sor Rungvisai (46-7-1, 23 KOs).