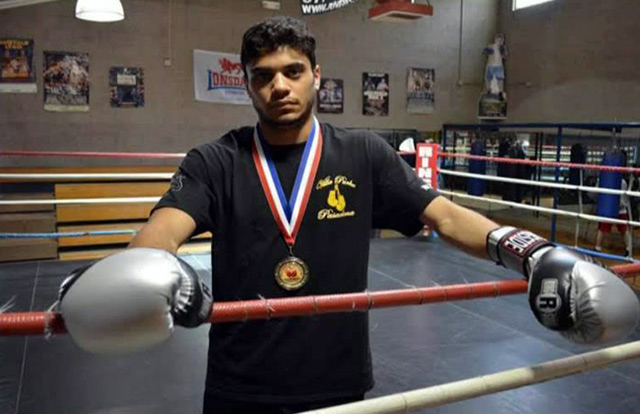 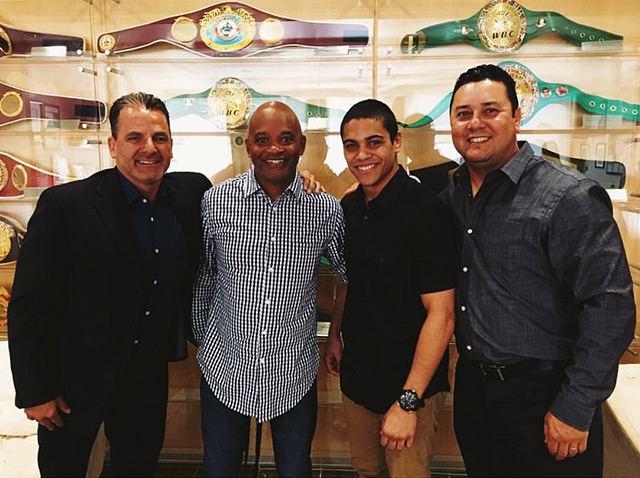 David Mijares signed a contract with Golden Boy Promotions last Monday and the Southern Californian is set to turn pro on one of the biggest boxing stages of the year – the undercard of the Canelo Alvarez-Amir Khan fight on May 7.

The 20-year-old southpaw will be in the first bout of the stacked undercard of the HBO Pay-Per-View event at the new T-Mobile Arena in Las Vegas, which means he can one day boast that he “opened” the 20,000-seat multi-purpose venue for boxing. That’s a big deal for even seasoned pro boxers, but the good folks at Golden Boy are high on the young man from Pasadena.

“We’re very excited about David,” said Eric Gomez, Vice President of the Los Angeles-based promotional company. “He was a top amateur. We’ve been talking to him for a while because the kid fits the mold with what we’re trying to do, which is build local talent. He’s bilingual, he’s good looking, he’s a nice kid and he can fight.”

Making one’s pro debut in the Entertainment Capital of the World, in front of a legion of boxing media from the UK and U.S. under the biggest fight of the year so far would cause some prospects to be star-struck, but don’t expect that to happen with Mijares. 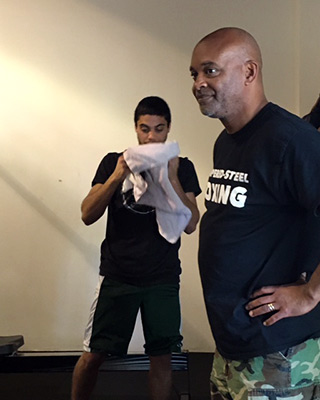 “Junebug,” as Mijares is known to family and friends, has literally grown up around boxing, legendary entertainers and sports figures.

His father and coach, David Paul, has trained Hollywood luminaries for 20 years, starting out at a private gym owned by iconic singer-songwriter Bob Dylan. The exclusive boxing club in Santa Monica was home to such celebrities as recently departed actor-comedian Garry Shandling and David Duchovny of “X-Files” and “Californication” fame.

Mijares was almost born in the gym (his mother’s water broke there but Paul got her to the hospital in time for the birth of their son). From the time he was able to walk, Mijares spent time in Dylan’s gym and eventually forged a tight friendship with Duchovny.

His first boxing competition – an exhibition against Ray Mancini Jr. at age 13, with his opponent’s hall-of-fame-enshrined father looking on – took place at Dylan’s gym.

Mijares quickly graduated from exhibitions to real amateur bouts and the open-class of notable state and national tournaments. He’s got that made-for-TV look and bright personality that makes you think you may have seen him in a recent commercial, but he’s a dedicated boxer, as his respectable 68-12 amateur record would attest.

Mijares won the national PAL tournament in 2013, 2014 and 2015 in the 141-pound division (winning the “Best Boxer Award” last year). He stepped up to the 152-pound weight class for the California Golden Gloves tournament, which he won last year, prior to dropping back down to junior welterweight for the U.S. Championships, where he earned a bronze medal. 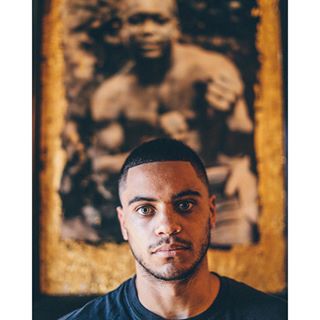 “We went for the dream – a spot on the U.S. Olympic team – but after being eliminated in the (Olympic) trials in Memphis last year, I knew it was time to go pro,” Mijares said. “I’m super excited to prepare for fights without headgear and I can’t wait to get my name out there.

“I want to impress and show diversity in my style by giving the fans a little of everything – combination punching, pressure, a lot body punching, and, of course, boxing.”

“Sheer Sports looks to sign kids that can fight in the ring and are respectful, articulate young men outside the ring,” said Lyle Green, a partner in the Sheer Sports management company.

“David is a special talent and the prototypical Sheer fighter. He dominates his opponents mentally and physically in the ring and is a true gentleman outside of the ring. We are very optimistic about David’s future and thrilled to have him as a member of Sheer Sports.”

Being a young local member of the Golden Boy roster means Mijares can expect to stay busy on the company’s monthly “LA Fight Club” series and bi-monthly Fantasy Springs shows in Indio, California.

“To be able to fight every month would be great,” said Mijares. “I don’t want to balloon up in weight and that doesn’t happen when you’re active. It’s just more productive.”

Mijares and Paul are targeting lightweight (135-pound limit) as their professional division despite making waves at heavier weight classes in the amateurs.

“Most professional coaches, especially the Mexican trainers, have always suggested that I move down in weight,” Mijares said. “They told me I’d have more power at lightweight. I often weighed in between 136 and 139 when I fought at 141, and I only weighed 144 pounds when I won the 152-pound Golden Gloves title, so I think lightweight is realistic as a pro.

“The lower in weight I go, the meaner I am in training, and I fight more aggressively. I’ll make that sacrifice because I want to entertain.”