Errol Spence Jr. lives up to the hype and his nickname, ‘The Truth’ 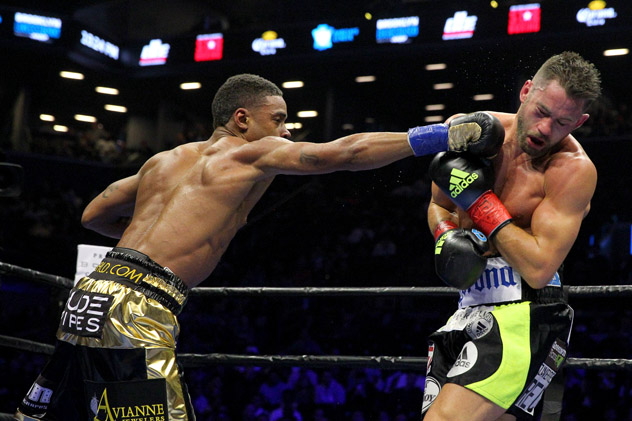 Errol Spence Jr. made Floyd Mayweather Jr. look like a genius on Saturday.

A favorite of Mayweather’s, Spence has been touted as a superstar in the making by many followers of the sport.

Spence proved them all right with a fifth-round dismantling of Chris Algieri, dropping him three times and stopping the tough Long Island boxer to remain undefeated.

The end came at 48 seconds of the fifth at Barclays Center in the main event of a PBC on NBC event in a performance that will likely launch Spence (20-0, 17 knockouts) into the upper tier of the welterweight division. Spence did to Algieri what the great Manny Pacquiao could not. Or Amir Khan, who both won decisions against Algieri.

“It meant a lot to get the stoppage,” Spence said. “I did something Manny Pacquiao couldn’t do, nor Amir Khan. That shows where I’m at in the welterweight division. Everyone wanted to see what I could do against a proven fighter and I blew him out of the water.”

Spence spoke of facing Kell Brook next. “I want a title fight next,” Spence said. “Hopefully, it’s Kell Brook, I’m his mandatory and I want him.”

Promoter Lou DiBella was similarly impressed. “He’s beyond a prospect,” DiBella said. “I’d put him in the top 10 of the pound-for-pound rankings. The winner of Thurman and Porter, Kell Brook, anybody. He might beat all of them. He walked through Chris. I used to think he was one of the best prospects in the world. Now I think he’s one of the best fighters in the world.”

Spence simply imposed his will on Algieri, punishing Algieri to the body in the first couple rounds and taking him out after he had worked up a sweat.

Algieri did respond with with an overhand right to get some separation in the second round. But Spence barely seemed to notice as he overpowered Algieri, pushing him against the ropes as Algieri covered up to end the second.

Spence again teed off on Algieri in the third round, nearly closing his left eye. As Algieri walked back to his corner, a look of discouragement colored his face.

The next two rounds were pure domination for Spence, who dropped Agieri with a roundhouse right midway through the fourth round. Algieri cursed as he went down, more angry than hurt.

Algieri was dropped again in the fifth by a hard left. Moments later a battered and bloody Algieri was nearly sent through the ropes by another left as referee Benjy Esteves mercifully stopped the fight.

The former titleholder Algieri spoke confidently before the bout of Spence never facing someone as athletic and experienced as him but Spence did to Algieri what he’s done to his previous 19 opponents, battering him.

“I think I’m the number one contender for Kell Brook,” Spence said. “Kell Brook knows what time it is. We gotta get in the ring and fight. (I want) Danny Garcia and all the rest of the welterweight champions. I want them all.”

Algieri(21-3, 8 KOs)said he got caught up trying to implement the wrong game plan.

“I was talking to my coach John David Jackson about it,” Agieri said. “I didn’t stick with each game plan. There were a couple of different game plans, a couple routes I could have gone. I was switching between two different game plans. If you do anything half way, it works none of the way.”

Algieri also said that an injury might have hampered his performance.

“I don’t want to make any injury excuses because the kid did a great job, but I felt something tweak,” he said. “I just stepped on it and the outside of the knee buckled a little.”