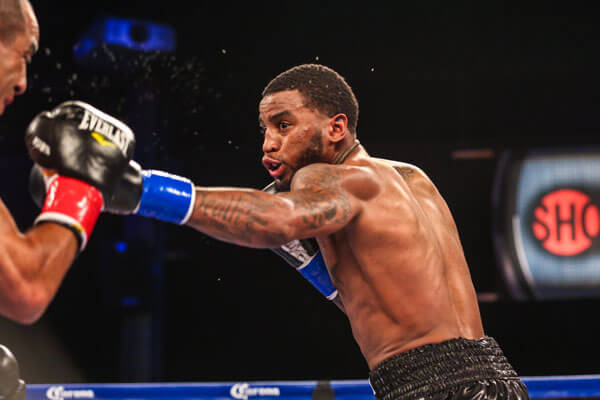 The publicist, who has worked for and with IBF/WBA middleweight titlist Gennady Golovkin for a long spell, set up the phone chat.

He billed the talk with Dominic Wade as being one with “the second best middleweight in the world.” That stuck in my head as I found myself on the line with Wade, who will find himself in a ring with the fresh-faced terminator from Kazakhstan on April 23, from the Forum in LA, to screen on HBO.

“So, the publicist, Bernie Bahrmasel, billed you as the second-best in the world,” I kicked off. “Is that true? Or do you fancy yourself the best, right now? Or does it have to be proven in the ring?”

“No, but do I think I’m the best right now? I think anybody (in his position) is going to think that. In that ring, I’m gonna prove it.”

He believes, he says, but not enough evidence or material to properly judge is available on Wade (age 25, fighting out of Maryland), arguably, who is just 18-0 (12 KOs) as a pro.

Wade’s best win came in his last outing, a split decision over ultra-vet Sam Soliman last June. His second best win was over Nick Brinson in June of 2014.

Honestly, he’s the beneficiary of the fractured set-up, day and age and atmosphere, which has made it difficult for “3G” to attract name foes.

RING champion Canelo Alvarez wants a marination process to grow the stakes. Other titlists, in general, want softer touches or balloon payment purses to embrace the risk…and Wade was No. 3 in the IBF. Tureano Johnson had this engagement but injured himself in training, so young Wade gets to show himself and the world that his ascension was earned and righteous.

“I rate Golovkin as a good fighter,” Wade told me. “I don’t think he’s the best ever, unstoppable.”

Yes, he allowed, “GGG” is the best he’s faced, on paper. But styles make fights and his style will stymie the 34-year-old Golovkin, Wade claims. He owns power in both hands, Wade continues, and no previous GGG foe owns the same mix of boxing ability and power.

His camp got turned up two notches, in acknowledgement that Golovkin (34-0, 31 KOs) is a bit of a beast.

Trainer Jay Stancil has put him through the paces. Wade had been with Adrian Davis, a fixture in that Maryland region. Stancil is the right pairing now, Wade says, someone who presses him to excel and also perks him up when needed.

Wade is currently single and is one of four children, three of them boys. Mom and Dad are still a duo and he grew up in Maryland, near Washington DC.

Dad brought scrappy young Dominic, prone to getting into street fights, to a gym. He sparred a tough type and showed skills. A vocational path was born.

No one has solved Golovkin. History says it is likely somebody will. Will it be Wade? His resume doesn’t leap out and scream UPSET win…but he predicts he, not GGG, stays unbeaten. “I’m going to come back home with those belts,” said Wade. “You’re going to see a bit of everything and the best of me. I’m going to go in there and get him.”