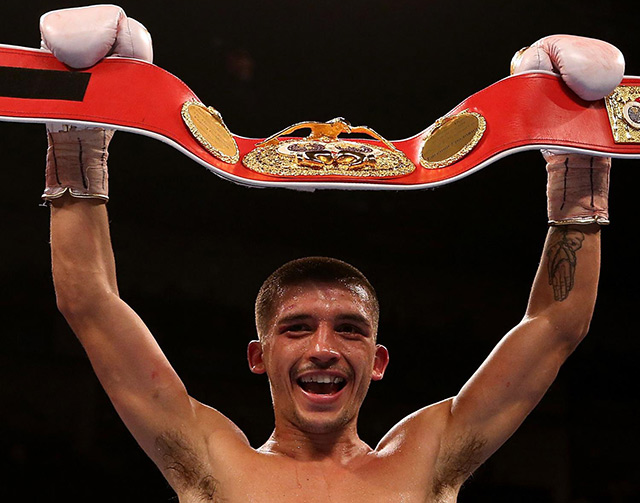 There was plenty of menace in their ring entrance songs, less so in the ring, but Selby, Wales’ IBF world featherweight titleholder, used smarts, stamina and work-rate to overcome the awkwardness of his number-one contender, Eric Hunter, and take a unanimous decision (scores 115-111, 116-110, 116-110).

Selby, typically accustomed to counter-punching off the back foot, had to stifle his natural urges to cater for Hunter’s own elusive style and was uncharacteristically aggressive in the early going. This, of course, played right into Hunter’s hands and, in round two, the American measured and unleashed a classy counter left hook which sent Selby to the canvas for the first time in his professional career.

The champion was up immediately. He claimed he wasn’t hurt. But the awkward and messy way in which he dealt with Hunter’s brief follow-up attack suggested the left hook had at least registered.

To Selby’s credit, though, there were very few signs of any lasting effects. In fact, the third round was a good one for him, he rallied strongly behind chopping right hands, and managed to put Hunter back in his shell. Then, at the start of round four, he buzzed the American with a fast right hand.

Right hands were the order of the day in the fifth, too, as Selby marched Hunter down, forced him into the ropes, and then unloaded rights whenever the opportunity presented itself.

Hunter, 21-4 (11 knockouts), was not without success of his own. Slick, intelligent and always on the move, he set countless traps throughout the contest and was often able to lure Selby on to hooks and sneaky crosses.

But, ultimately, while Hunter looked the part, his activity rate didn’t match the posturing; frustration set in following a point deduction for low blows in round eight and there was much in the way of sulking as well.

In stark contrast, Selby, 23-1 (8 KOs), the better-disciplined fighter, stuck to his game plan, remained busy, and bagged a deserved unanimous decision at the bout’s conclusion.

WBA bantamweight titleholder McDonnell retained his belt with a comprehensive drubbing of Mexico’s Fernando Vargas tonight in London. The fight, one-sided throughout, was eventually stopped at 2:39 of round 9.

Vargas, from Tijuana, gave it a go early, stalking McDonnell behind wild left hooks and overhand rights, but it was the more refined work of McDonnell, 28-2-1 (13 KOs), which created all of the eye-catching moments. His jab, sharp and snappy, permanently found its home, and his impressive lateral movement, a staple of his game, created many openings for his counter right hand.

The finish was as inevitable as it was swift. Vargas, 29-10-3 (20 KOs), a late replacement opponent, had by now run out of gas and given up his assault, and McDonnell, the sudden aggressor, backed the Mexican into a neutral corner and stunned him with two solid right hands, leading to the first and only knockdown of the fight. With that, it was effectively over. Vargas’ corner entered the ring and referee Terry O’Connell put an end to the mismatch.

Groves, a three-time super middleweight title challenger, continued his determined pursuit of a fourth world title shot with a fourth-round stoppage win over the previously undefeated Scotsman David Brophy, finishing the fight 47 seconds into the round with a well-placed right hand to the body.

Twenty-seven-year-old Groves, owner of one of the finest jabs in British boxing, used this particular punch to good effect in the early going, controlling Brophy behind it and reddening his face from the off; this, of course, set up right hands and it wasn’t long before Groves had Brophy shaken and hurt.

Brophy, now 16-1-1 (1 KOs), survived the first round onslaught, seemed to gain confidence as the bout progressed, but was then caught with the crippling and conclusive right hand to the body in round four. From that, there was no coming back. Brophy, on his hands and knees, failed to beat the count and Groves, 23-2 (18 KOs), bagged his second stoppage win of 2016.

You might question how much middleweights Macklin and Brian Rose have left, or, indeed, where they go from here, but, make no mistake, very little was left in the ring this evening at London’s O2 Arena; Macklin, a 33-year-old former world middleweight title challenger, pipped Rose by scores of 115-111 (twice) and 113-113 following 12 hard-fought rounds.

In an archetypal crossroads fight, with careers temporarily in no man’s land, the pair locked horns from round one and refused to budge or surrender momentum. Blackpool’s Rose, 31, got some joy with straighter shots, particularly his jab and a short right hand, while Birmingham’s Macklin, the thicker-set of the two, whipped in body shots up close and huffed and puffed, working both hands consistently, in spite of a damaged face.

At times, they got too close. They wanted it too much. This showed in round ten, when Macklin lost a point for low blows, and also in a lively twelfth, when Rose was docked a point for excessive holding. In the end, though, with both marked up, and both having been reprimanded by the referee, it was Macklin, now 35-6 (22 KOs), who got the majority decision nod and injected life into a meandering career.