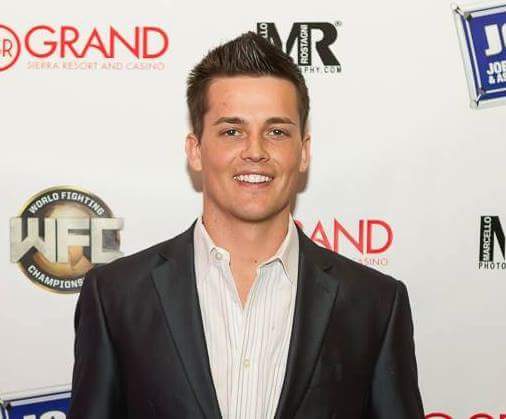 Matt McGovern is the founder and promoter at World Fighting Championships, a crossover boxing and mixed martial arts promotion that presents its 50th event tomorrow in Pittsburgh. If nothing else, the man stands out because he looks like a mature boy-bander more than the typical fight promoter.

I checked in with this dealmaker and learned a bit more about his event, which features the Fighting Karpency Brothers, three of ’em – Tommy, Jeremiah and Dan – and what makes the 32-year-old Las Vegas resident tick.

Matt McGovern: The fight business is evolving, the consumer wants more, faster. To cater to those needs, we need to be ahead of the game when it comes to social media, as well as from a marketing/operations standpoint. With the help of technology in 2016, we are able to churn out 20 events a year with a small staff. Thirty years ago, it might have taken 25 people to do the same work.

MW: What is the difference in promoting boxing and MMA events? How do the fan, media and sponsor cultures differ?

MM: Building a fight series to fit your region is most important. Every area has a unique demographic of fight fans and history and you should tailor your events to fit. For example, Baton Rouge is a great boxing market and they’re most interested in African-American fighters. If you go to our shows in Laughlin, Nevada, they’re most interested in MMA and the majority of the fans are American Indian and Hispanic. Since our promotion is well-versed, and open to promoting all combat sports, we can offer the fans and our gaming properties what works best for them.

MW: What do you think about professional MMA coming to New York? Will WFC look to do events there?

MM: It will be great for making the sport even bigger, with the media reach New York has in general. The Governor in New York (Andrew Cuomo) still needs to sign off on the bill but it will be great for our business. I have had two properties call me to do shows already, so it could open up more doors for us to grow as well.

MW: You put on a large amount of shows with a small staff. What does a typical day look like for you? How do you balance work and family time?

MM: We have 19 events on the books in seven markets this year, 12 boxing and seven MMA events. So it really is 24/7/365 fights for our family. I wake up and go to sleep to fighters, coaches and casino needs. With a wife, two kids and one on the way, it’s hard to find any balance but we are too fortunate to complain about too much business. We’ll charge it head-on and sleep later.

MW: How has the evolution of Premier Boxing Champions affected your business over the past year-and-a-half? How do you see it doing so moving forward?

MM: PBC made a huge impact on middle-tier promotions that rely on small TV to build their business and fighters. We have set up our fight promotion a little different. We don’t rely on TV, sponsors or how far our signed fighters go. We are profitable by just the amount of asses we put in seats. So when the PBC find an exclusive television partner, there is going to be a HUGE opportunity for a promoter with the ability to provide dozens of fights to a network. The perfect scenario would be how Bellator got bought out by Viacom when the UFC left for the SPIKE deal. I hope PBC the best because, if they fold, boxing will DECLINE in a huge way.

MW: It’s your 50th event. That’s a milestone by any measure. What do you wish you’d known when you first staged WFC 1? What has been your high moment in the last 50 shows? Your low?

MM: It’s took the UFC 10 years to (get to) 50 and Top Rank (Promotions) probably longer. So it’s a milestone in that aspect but we definitely have bigger goals to accomplish in the next 50. Building this promotion from scratch with my own money has had made things harder but I wouldn’t change a thing. I still have a ton to learn and I want to do it the hard way because it’ll be that much sweeter in the end.

MW: What can we expect out of your first event in Pennsylvania? What are your plans there after this upcoming show?

MM: The big-time fighters in the area are down to fight anyone and they “get” the business end of it. We’ve sold over 1,000 tickets so far on this event, so we should get close to sold out. The fighters and the casino have really gotten behind the event and it’s going to set the tone for us in the market. We have two more shows booked for this year. We want to get all of the great camps in the Northeast involved there and hopefully bring some television this year.