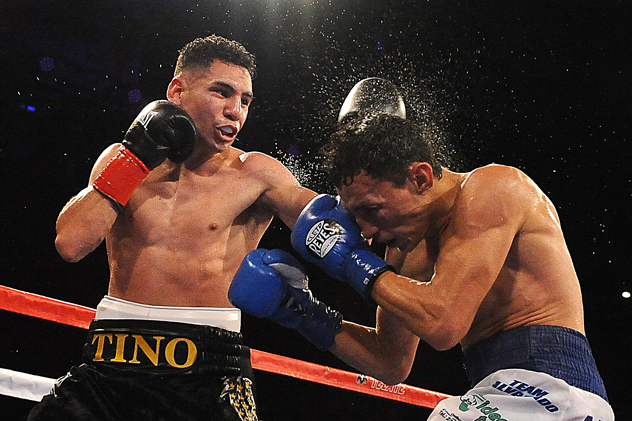 Manuel Avila passed his crossroads test and kept his record pristine, defeating Nicaraguan veteran Rene Alvarado with a 10-round unanimous decision at the Belasco Theater in the main event of Friday’s “LA Fight Club.”

Avila (20-0, 8 KOs) had a successful run at 122 pounds that briefly put him in THE RING’s Top 10 ratings after a sixth-round stoppage of Cuban Yoandris Salinas in October 2015, but the 23-year-old from the Bay Area city of Fairfield, California, was fighting here as a featherweight for just the second time.

Alvarado (23-7, 16 KOs), 27, brushed against a world title shot with his win over Robinson Castellanos in February 2014 but after that alternated between four losses and three wins. Successes and failures aside, he was clearly intent on sending Avila home disappointed.

Avila looked good in the early rounds, double- and triple-jabbing his way in to set up straight rights and hooks before backing out of harm’s way, and in general was controlling the distance and beating Alvarado to the punch. Alvarado scored with some nice shots, most notably a straight right in Round 3, but seemed to be waging a side battle with some unusually slippery shoes, which his corner MacGyvered with tape before the fourth. It seemed to help, as Alvarado began to sit down on his punches with more confidence and enough of them found their way to Avila’s face to draw blood.

Avila continued to get tagged by occasional clean shots, but kept his composure and his grasp of the distance and either danced away or evaded Alvarado’s punches with upper-body movement and superior defense. He also snuck in power shots of his own and in the final two rounds seemed to be in command. Alvarado never stopped pressing, though, and going into the tenth round he was still very game.

Gilberto Gonzalez fought his way out of an apparent hole to stop Luis Arceo in the sixth round of a grueling bout that preceded the main event.

Arceo (28-15-4, 18 KOs), 37, had fallen to three tough opponents in his most recent fights — Jose Zepeda, Mercito Gesta, Joel Diaz Jr. – but the focused veteran jabbed his way into some forceful combinations and appeared to be giving more than receiving in the first three rounds.

Gonzalez (26-3, 22 KOs), 28, from Mexico City, who was on a seven-fight winning streak going into the fight, got a bloody and possibly broken nose in the first round — it seemed to bother him as the fight progressed — but given that in his last fight he blew out his knee in the second round and still hopped his way to a knockout of Hevinson Herrera in the third …

Gonzalez stepped it up in the fourth and by the second half both men’s shoulders were flecked with the blood leaking from their faces, but the taste of it must’ve motivated “El Vampiro,” as Arceo surged again in the fifth. Midway through the sixth, however, Gonzalez landed a monster left and dropped Arceo on his face. It was a sudden and dramatic turn but Arceo rose quickly to his knees, only to see that his corner had already thrown in the towel.

Distance made for an awkward matchup between welterweights Oscar Torres (8-1, 4 KOs) and Marquis Taylor (4-1), who collapsed with emotion after winning a six-round split decision. The mohawked Torres, 27, eschewed his jab and tried to land with sweeping attacks but often found himself either swinging in space while the nearly 6-foot-2 man from Houston was too far away to reach, or unable to do anything while the two were intertwined in a clinch. Meanwhile Taylor, 22, was able to dip and slide out of harm’s way while landing enough single shots and occasional combos to win by two scores of 58-56 and 59-55 in his favor, with the third judge scoring it 59-55 for the Los Angeles-based Colombian.

Heavy-handed featherweight Edgar Valerio (6-0, 4 KOs) was in a six-rounder but needed only a sliver of that, making short work of Javier Rodriguez (3-2, 2 KOs) with a first-round knockout. The 21-year-old from South LA hammered Rodriguez with some wince-inducing body shots in the opening moments but it was a short left hook upstairs that dropped the Mexican to a seated position in the corner, where he remained until Jack Reiss reached the count of 10.

In the junior featherweight division, Pablo Rubio (5-0, 3 KOs), 19, remained undefeated with a fan-friendly split decision over the 26-year-old Juan Carlos Benavides (5-8-1, 2 KOs). Benavides liberated a good amount of blood from Rubio’s nose with uppercuts starting early in the first round and then punched the plastic out of “The Shark’s” mouth in the third, but Rubio convinced two of the judges with effective retaliation to win by scores of 40-36, 39-37, with the third, 39-37, going to Benavides.

Bantamweight Joshua Franco (5-0, 3 KOs), a 20-year-old from San Antonio, knocked out Jorge Perez (2-2, 1 KO), 18, in the second round. Franco, who has now fought all five of his pro bouts at the Belasco, scored a first-round knockdown with a series of left hooks, and in the second round dropped his teenage foe again with a right uppercut that immediately brought the mercy wave from referee Dr. Lou Moret.

In the night’s four-round opener, junior lightweight Tenochtitlan Nava (1-0) looked very eager in his pro debut, plowing into Antonio Martinez (3-7, 3 KOs) with a non-stop flail of punches. The 32-year-old Martinez was more selective with bodyshots and uppercuts but couldn’t overcome the workrate of Nava, 22, who won a unanimous decision.