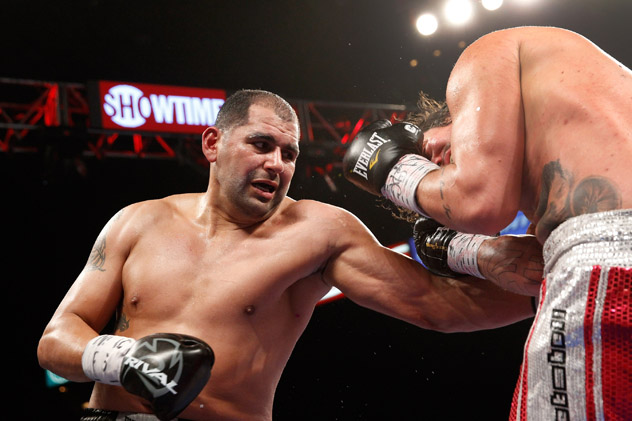 Twenty four hours after hopscotching on planes, from Houston to Frankfurt to Warsaw and then getting bundled into a car to Krakow, Poland, Eric Molina set down his bags and got to start getting his brain really ready for what could be not just a stern test but also a majestic opportunity for a guy who turned pro nine years ago but still looks to break through.

The breakthrough, which a win over Tomasz Adamek (50-4, 30 knockouts) on Saturday could bring, would mean Molina could (if he wanted to) quit his job as a special education teacher at J Economedes High School in Edinburg, Texas. The 33-year-old heavyweight, who lives in Weslaco, Texas, at the southernmost tip of the state, gave a solid account of himself against WBC titlist Deontay Wilder last June.

Please note he had a scant two – yes two – amateur fights before turning to the pay-to-punch ranks, so his ascent deserves applause; it’s fair to say.

Molina (24-3, 18 KOs) got more than ample notice, 70 days, to train for the bout against ultra-vet Adamek, who is highly revered in his native Poland. He took off from work, from the high school, the week of March 14, so, he tells me, he believes Adamek could be in for it Saturday.

“This is the first fight I had a full training camp for,” Molina told me. “I had three weeks notice for Chris Arreola, three for Tony Grano, five weeks for Deontay Wilder. This is my first professional camp.”

Wrap your brain around that, will youÔÇªThe man was tasked with fighting Deontay Wilder, owner of a murderous right hand, and had to juggle his nine-to-five while readying himself for the test. If life ain’t fair, that goes double for boxing, I’d sayÔÇª

“I want to be in the big fights, Mike,” Molina explained. “I’m not ducking anyone. Now I’m going to Poland, risking a lot, but I have to do this to get to where I want to go.”

He got a lifetime op in a title challenge against Wilder but rolled his ankle early on and fought through a hairline fracture after getting knocked down in round four. His night ended after nine rounds. “So I had a lot of things I had to fix, and we did, in my smoothest camp,” he said.

Full props to the proper gent Adamek, for not picking a short notice type with whom to tango. Molina got enough time to prepare correctly and, to hear him talk, that could be bad news for the Pole, who went 0-2 in 2014, with losses to Czar Glazkov and Artur Szpilka, and rebounded with a W over Przemyslaw Saleta in his last tangle, in Sept. of 2015. He is 39, surely on the downward slope headed toward the end zone of his career. He has promised one and all their money’s worth Saturday, that he will be offering up the entirety of his fighting spirit in one of his last outings. “I’m not really concerned with what Adamek has left, what he’ll be doing,” Molina said. “I’m looking forward to seeing what I can do!”

Last Thursday morning, Molina got a phone call from an 84-year-old icon for the ages, Don King. King has promoted Molina for six years. He will not be traveling to Poland but called to wish his big fella well. “We talk every now and then,” Molina said. “He gets me going, calls me before fights, tells me he believes in me. We do have big plans and he’s done his end of the bargain.”

There is more than fair interest in this card, which will run on pay-per-view in the US; the Tauron Arena holds maybe 18,000 and Molina is told it will sell out as the big lads contest for a regional title. Trainers Roberto Norris and Roberto Sabate made the Poland trek and dad Ricardo Molina will be present for moral support. Three other friends will make up the majority of the American contingent in the joint Saturday. “Whether it’s ten or 12 or 20 people, it’s the same. I feel I do better on the road.”

Hardcore fans know, two weeks ago, a kerfuffle popped up, when it was reported that Australian heavyweight Lucas Browne, after beating Ruslan Chagaev, tested positive for clenbuterol, a weight loss aid/stimulant. Molina is eyes-wide-open about the testing thing. He knows Browne’s team is claiming he got dosed in Russia, that he’s a clean fighter and got done dirty. Molina told me he took a PED test in the US before leaving for Poland, for comparison’s sake. “But traditionally Poland hasn’t (had a reputation for testing funny business) but I will be careful what I consume over there.”

Molina takes issue with the lack of bite in punishments for those cutting corners. “People think, ‘If I can get away with it, why not?’ I don’t blame some of them for trying it. I know I’m not using, going that route, that I wouldn’t, with the integrity of what I stand for.”

At school, he is Mr. Molina, known as a caring and compassionate sort, who has time and energy and love for those who fall between those cracks. The kids with developmental and behavioral issues, they see Mr. Molina – and know he gets them. He believes in them. Autism, Down’s Syndrome, those conditions and the troubled teens who rail against foes seen and unseen, Mr. Molina helps them in the battle. His patience and decency is on display when he tells me he will be missing nine days of work and won’t get paid for them. He took some sick time and the fight falls on spring break, so, he tells me, he’s just happy to get the opportunity.

Shhh, don’t tell. Sometimes I find myself for rooting for the Mr. MolinasÔÇª

And thanks to Mr. Woodsy, we root for the Mr. Molinas too…