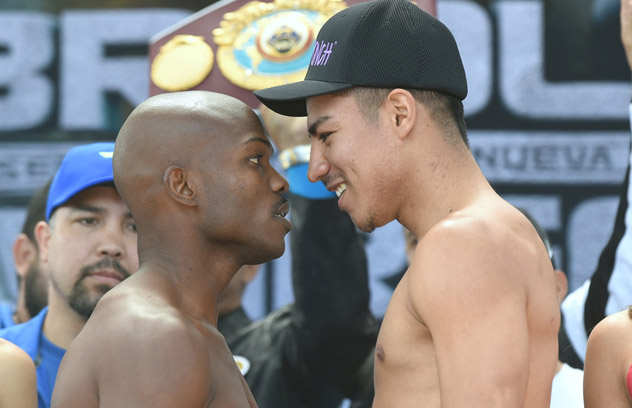 Newly crowned WBO welterweight titleholder Jessie Vargas may have finished the job in his title-winning performance against Sadam Ali, on March 5, but the 26-year-old feels he has unfinished business with the only man to earn a win against him.

Vargas (27-1, 10 knockouts) tells RingTV.com that his priority is securing a rematch with Timothy Bradley Jr., who outpointed him last June.

Bradley is penciled in to face Manny Pacquiao for a third time on April 9. Bradley won the interim WBO title by unanimous decision against Vargas, though the fight’s conclusion was marred by controversy when referee Pat Russell confused the 10-second clapper for the bell to end the 12th round, just as Vargas had Bradley seriously hurt.

Regardless of the outcome of the third Pacquiao fight, Vargas wants another shot at his fellow SoCal native.

“I want Bradley. Win or lose, that’s the fight that I want. If he says he wasn’t knocked out the first time, we haven’t finished our 12th round. I want to finish up that 12th round and keep that 13th, 14th going. I’ll knock him out in four next time,” said Vargas.

Vargas credits his new-found chemistry with Dewey Cooper, his sixth trainer as a pro, with helping take his ability to the next level. “He brought out the best in me,” said Vargas.

He didn’t have much to say about a possible fight with Pacquiao, taking him for his word that he would retire after the Bradley fight. “If he’s gonna retire, there’s no sense in talking about that fight,” said Vargas.

Vargas, who is signed with Top Rank Promotions, said he hadn’t spoken in depth with Bob Arum about his next fight but says they are eyeing a July return.

Vargas says he wants to unify the titles in the new-look welterweight class, discussing fights with IBF titleholder Kell Brook and even WBC titlist Danny Garcia, despite the latter being signed with Al Haymon’s Premier Boxing Champions, which doesn’t have a working relationship with Top Rank, due in part to ongoing litigation between the companies.

“Danny Garcia is a fight that I’m definitely interested in; he’s one of the PBC guys that I’d ask for,” said Vargas of the former RING junior welterweight champion.

Asked about Keith Thurman, the No. 5 rated welterweight by THE RING, Vargas said, “I think he’s an explosive fighter that focuses a lot on power.

“This is a long but short career but long enough to where we can all meet at some point. We can probably meet in a couple of years. I’d say in a year or two, three years; you just don’t know.

“I know there’s some complication but I’m hoping very soon we can start mixing up the fights together with some guys with PBC.”