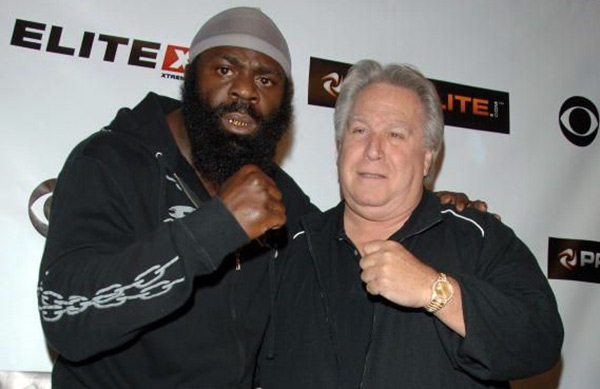 Boxing promoter Gary Shaw watched the Kimbo Slice-Dada 5000 fight on Friday night, and felt many of the same feelings the majority of watchers felt, judging by a sampling of social media response.

Ughhh…
Slice’s stamina reservoir dropped to E in round one and both men were running on fumes by round two of the three rounder. Both men looked to be wanting a cot and an oxygen tank by the second and were operating in super-slow motion in the third. Dada’s fatigue factor had him unable to lift his hands and Slice, who sports an 7-0 mark as a professional boxer from 2011-2013, got awarded a stoppage victory when the ref did the merciful thing and ended this Bellator co-feature.
Slice, age 42, a Bahamas born Florida resident, is 8-2 in MMA.
Seeing him labor so to maintain enough oxygenation to stay aloft was painful and had watchers thinking that maybe this fighting gig isn’t suited for him.
I posed this to Shaw, who promoted MMA for a spell, as the sport ramped up into a plateau of public awareness and ramped up buzz.
He promoted Slice’s boxing scraps too and I was curious if that arrangement would continue.
“The contract most likely ran out,” Shaw told me. “Kimbo is a great guy, I love him, much respect to him, but I never want to see him get embarrassed or injured.”
My take: I really, really shy away from weighing in on whether a fighter should quit fighting. I try to know and stay in my lane. But if it’s true, Kimbo’s knees are so shot he can’t run much, that impacts his ability to train and prepare properly. His stamina is such a glaring issue. So yeah, unless he’s able to address that, maybe it’s best for him to really consider exiting the fighting arena, and move on to other endeavors.