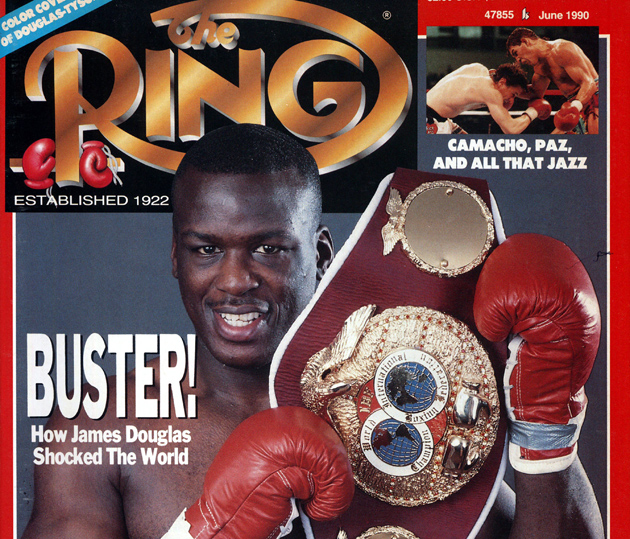 February 11 marked the 26th anniversary of the biggest upset in boxing history when James “Buster” Douglas ripped the IBF, WBA, WBC and lineal heavyweight titles from Mike Tyson’s grasp.
Douglas looked to make good in his second major title attempt, having lost to Tony Tucker just over 19 months prior. He had a terrific nine-week training camp, though his mother passed away during the build-up. He headed to Japan after the funeral, arriving 17 days before the fight. No one believed the 42-1 underdog had a shot.
“We had a press conference at separate times,” Douglas said, recalling his arrival in Japan. “His press conference was first; it was wall-to-wall (with media). They didn’t have enough seats.

“Then it was my press conference. We came in there; there were chairs all over the place. There was maybe 10 percent full of the press there and I’m stretching it when I say that. The guys were sat there scratching their heads trying to figure out what to ask me, ‘So, Buster, what color trunks are you gonna wear?’ or ‘Buster, what day were you born?’ It was basically, ‘I’m doing this ’cause I’ve got to have something to quote from you,’ because no one gave me a chance.”

Douglas remained steadfast, focusing only on the fight.

“I’d been through so much. That was my second shot at the world title,” he said. “I’d made all the corrections and I was ready for the second time. I wasn’t gonna let this opportunity escape me. Fortunately it was against one against one of the baddest men to have ever held that belt but I still felt good about my chances and it all came together. He ran into a Buster Douglas that wasn’t to be denied.”

Early on, in the fight, you got an inkling that this wasn’t a regular Tyson defense. Douglas employed an excellent ramrod jab that jolted Tyson’s head back time and time again. Douglas was in the lead as the eighth started.

“The eighth started the same as the last seven,” he said. “I was working pretty good, hitting him with good shots, softening him up, kept banging on him. Just for that moment, I took a moment to reflect and stop punching and start looking as if to say, ‘What do you think about me now?’ and gave me the answer when he threw that shot! (Douglas hit the canvas in the eighth round.) Then I got back on point mentally and the rest is history.”

Two rounds later, Douglas hurt and dropped Tyson, creating an unmatched electricity and referee Octavio Meyran counted out Tyson at 1.22 of the round.

At that moment, life changed forever. Douglas remembers his flight landing in Chicago: “We were getting off the plane and, at the end of the walkway, there was a bunch of people and I was like, ‘Man, I wonder what’s going on over there,’ and that’s when it hit me: They’re there to speak to me, lights, camera, action.”

From then onward, his time wasn’t his own. Douglas was now a celebrity and everybody wanted a piece of the new champion’s time.

“I wanted to sit back and relax,” he said, “but it was like, ‘No, we’ve got to do this; we’ve got to do that.’ It became very demanding. I got to the point where this was an awesome dream turned into a crazy nightmare.”

Douglas returned eight months later and out of shape against Evander Holyfield. It wasn’t the same Douglas; he looked flabby around the mid-section, 15 ¾-pounds heavier than for the Tyson fight. Holyfield easily dispatched him in three rounds.

Douglas retired; his weight ballooned to nearly 400-pounds and he fell into a diabetic coma in 1994. Things steadied and he left hospital awhile later. Douglas knew he had to lose weight and did so. Soon after, he decided to make a comeback.

Time had moved on and despite several wins, he was never to return to the top table of world-ranked boxing, retiring for good in 1999, with a final record of 38-6-1 (25 knockouts).

When asked of his proudest moment, Douglas reminisced, “My career, coming from where I started in my father’s basement. I called him after my junior year in college and told him I was gonna come back that summer and turn pro. It sent a shockwave through the family. They were like, ‘He’s gonna do WHAT?!’ From that point on to winning the heavyweight championship, that was the ultimate but I’d have to say the whole career and top it off achieving an all-time dream and goal, winning the heavyweight championship.”

Today, Douglas, now 55, lives where it all began in Columbus, Ohio and is enjoying life.

Douglas will be the feature of an upcoming “Best I Faced” in a future issue of THE RING. 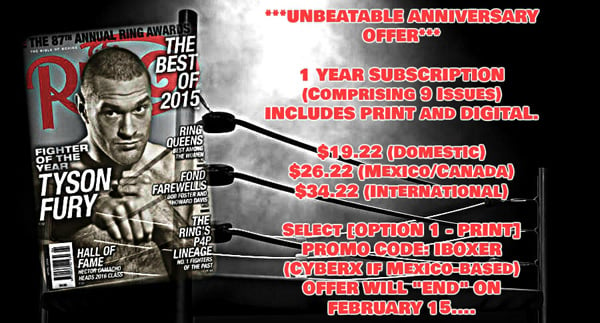