Where’s the Puerto Rico vs. Mexico heat in Garcia-Guerrero matchup? 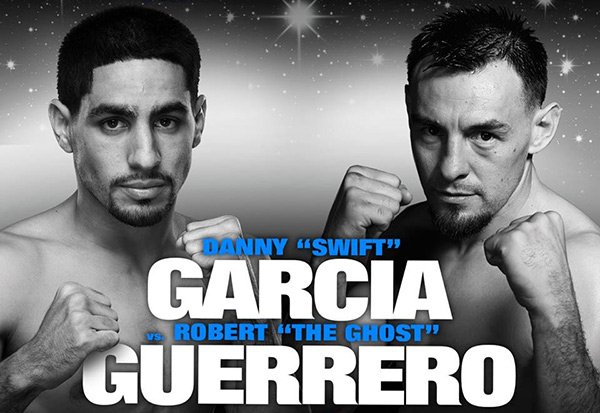 Something is missing from this weekend’s showdown between Danny Garcia and Robert Guerrero at the Staples Center in Los Angeles. Some will say it’s competition as Guerrero hasn’t looked too great in his previous two fights (a decision loss to Keith Thurman and a narrow escape against Aron Martinez) and Garcia has yet to have a breakout performance since his star-making showing against Lucas Matthysse back in 2013.

But that’s not necessarily it. Although Garcia is unbeaten (31-0, 18 knockouts), he hasn’t looked all that great himself. Arguments can be made that he lost to both Mauricio Herrera and Lamont Peterson. The fighter known as “Swift” knows he needs to prove that he should be placed amongst the elite welterweights. Meanwhile, Guerrero has a lot to prove considering that he’s 2-2 in his last four fights and would love to rinse the underwhelming performance against Martinez from his mouth.

It could very well be a competitive fight despite the notion that Guerrero is damaged goods. However, what’s missing is the rivalry element. You know, the Puerto Rico vs. Mexico rivalry that always seems to bring out the best in fighters.

Reason being is that Garcia hasn’t necessarily bought into the idea that this fight is part of the long-standing rivalry.

“I feel like I represent everyone; Americans and things like that and a lot of Mexican-Americans. I’m an American-Puerto Rican,” Garcia said on a recent conference call with his best politically correct foot forward. “So I feel like if you’re born in American and you’re Latino, I think it’s all the same. So that’s how I’m feeling and that’s why I just feel like I represent all the Latinos.”

With Puerto Rico vs. Mexico having a long history of great fights that includes, but is certainly not limited to Sanchez-Gomez, Chavez-Rosario, Trinidad-Vargas, Salido-Lopez and Cotto-Canelo, you would think that somebody would play up the rivalry to draw some heat to the first boxing event on Fox. Hell, the rivalry has a Wikipedia page dedicated to it.

But Garcia doesn’t appear to want to sell that angle and the promotion has kind of strayed from it. Maybe it’s because Garcia was born in Philadelphia and he simply isn’t embraced on the small island like a Miguel Cotto. Either way, it’s something that could work. But don’t blame Guerrero. He knows what it is and is willing to embrace it.

It also helps that he’s going to have a healthy Mexican contingency backing him at Staples Center.

“Whether you like it or not it’s a rivalry and it’s been a rivalry in boxing and soccer for years,” the product of Gilroy, California said. “That’s what it comes down to, that’s what makes our two cultures so competitive at boxing. It’s because of that rivalry. Mexicans want to be better than Puerto Ricans in the game. In my honest opinion I think Mexicans are better in the game. It’s time to come out and show what I still got left and what I can do.”

Fights like this need that edge to connect with fight fans. This could very well become an exciting fight as Guerrero is certainly not one to back down and Garcia keenly aware that a lot of eyes will be on his performance. It only adds to the promotion when a historic rivalry such as this is brought into the fold.

They may not be speaking it into existence, but perhaps their fists will do all the talking for them on Saturday night.