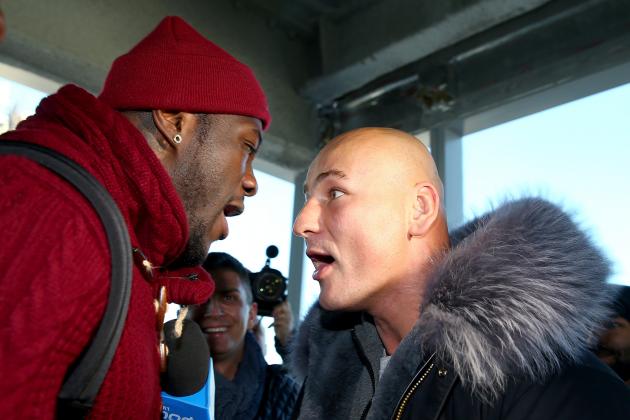 The room was good and full. Power brokers here and there. Stephen Espinoza and Brett Yormark and Lou DiBella and Kathy Duva and so on and so forth…

Why this level of assemblage? Heavyweights, baby…

There are heavyweights and then, secondarily, all other weight classes. WBC titleholder Deontay Wilder seeks to be the man to win the musical chairs game, to fill the seat left by Wladimir Klitschko, who lost to the giant Traveller, and now RING champion Tyson Fury. He can edge closer to that throne if he takes out Polish lefty Artur Szpilka Saturday, at Barclays Center in Brooklyn and on Showtime. A splashy KO will hurt the Pole’s head but aid the Alabaman, who is still seeking across-the-board fan appreciation.

Wilder took to the mic at the Edison Ballroom in Manhattan and said he is happy to “be in the Big Apple.”

He noted it’s been 115 years since Brooklyn hosted a heavyweight title fight. He said he’s motivated by his four kids, especially his daughter, born with spina bifida. The kids “are my boss,” Wilder said.

The long, tall hitter said he’s hungry and, in 2016, he’s not playing. Wilder said he wants his actions to speak for him, so he won’t promise vicious violence. “By having someone like me (on the top), it’s only gonna get better,” he said.

He drew chuckles comparing his belt to a sweet, sweet lady. He said “I want it all,” meaning all the belts. Too many belts are out and about, he said. He wished his foe luck “because he will need it.” Wilder was gracious, calling Szpilka a good pro and thanked the Polish people for attending on Saturday.

Their Wednesday photo op scuffle, which made TMZ, can be chalked up to excess enthusiasm, Wilder said. He is in a new mode of motivation, he said in closing, and promised a “different Deontay Wilder.”

You will hear “…and stilllll!” he roared. He finished with a high-decibel “Bommmmmmb Squad,” and drew applause and some startled gasps from one or two snoopers.

Szpilka, who did time for assault at age 19, and headbutted Wilder during a Wednesday press op, lost his step-up fight, to Bryant Jennings, so Wilder is a stern test. He said his English is pretty good but he wanted to make himself clear in Polish. He wants to become first Polish heavyweight champ and screamed that we’d be hearing “…and the newww!” on Saturday.

Others having their say included “Prince” Charles Martin, who thanked his mom for making a strong man. He fights Czar Glazkov, a Russian living in Miami, for the vacant IBF heavyweight title. Czar told me his experience will pay massive dividends and he too wants all the belts. Undercarder Mike Lee promised a good show Saturday and reported he’d signed on with promoter DiBella. Barclays boss Brett Yormark said his crew is committed to big events and told me he’s excited to see Danny Jacobs again, maybe in April.

All in all, a solid buzz was in the air and a good turnout of press appeared. This indicates good things for the good of the sport.

Michael Woods‘ excess enthusiasm can be chalked up to excess enthusiasm. Yes, Kids, you read that right. The guy is always on, especially when it comes to boxing in his hometown. And caffeine helps.