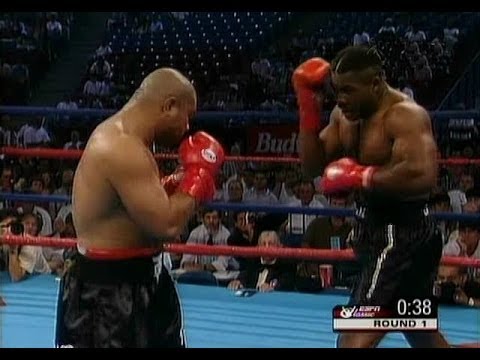 In the grand scheme of things, this issue doesn’t rank in the pound for pound Top 10 of my pet peeves. But it might sneak into the Top 25… 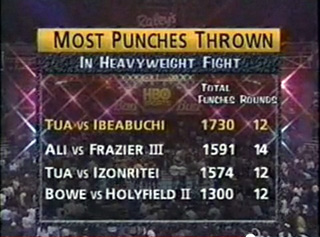 This morning, I was YouTubing, watching some old Ike Ibeabuchi footage. If this guy is the new savior to the division, after his extended state-funded vacation, then I wanted to reacquiant myself with him. I fired up the 1997 Ibeabuchi vs. David Tua bout. It was a CompuBox orgy, punches galore, fan friendly, action-packed, and it unfolded in June of that year, in Sacramento. HBO broadcast it. I was so surprised then to hear Joe Tessitore and John Scully calling the action. Good work, those two do.
But where were Lamps and Larry?
Nowhere to be found…or on the cutting room floor. 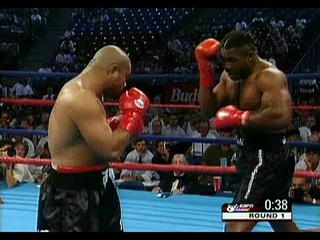 Here’s the deal: I reached out to Someone Who Would Know, to ask why on God’s green Earth would ESPN Classic, the network from this edition of the fight originated, use Tess and Scully, instead of the original call. Simple-ish explanation. My guy told me that the promoter of the event that was dealt with to secure the rights to re-show it, he recalls it was Main Events, they didn’t know if they had the rights to sell the call of the fight. The video, yes. But the voices heard on the broadcast? They weren’t sure…So, better to be safe than sorry. The powers that be in Bristol decided to use a parachute crew, Tess and Scully, to call the action, basically as though they were on scene. No, they didn’t say, “Here we are in sunny Sacramento!” But they did speak, generally, as though they were on site.
Grrr… 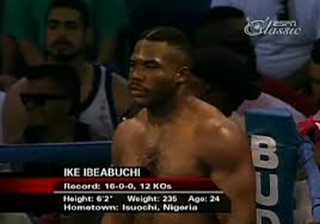 I wanted a time capsule and what I got was anything but. I needed to know, was Tua the heavy favorite coming in? (He was; Larry Merchant admitted he hadn’t heard of the up-and-coming Nigerian until this fight got made and he started his research.) I wanted to see how effective Ike was in his prime or if the passage of time had rendered him more wondrous over the span.
So, yeah, the issue was rights. This was 1997 and people weren’t as savvy at clarifying rights, locking down each element of the show. I asked my guy, c’mon, does this irk you, this “tainted” version of the fight?
“Eff yeah!” he told me. “I hate it too!”
Also to be considered, relationships. If memory serves, near around that time, the ESPN and HBO gangs might have been scuffling in the lawsuit ring over rights issues. So, it likely was not the proper time to broach the subject, see if common ground could be found, to insure the authenticity of the broadcast.
Anyway…there is a version of the HBO broadcast, so I was able to get the lay of the land, circa 1997, and hear Jim Lampley touting the Samoan/New Zealander Tua as an heir to Mike Tyson.
This is not an unimportant issue, actually; if all such shows were re-dubbed, then history would be affected. Tess and Scully couldn’t help but be influenced in their call, even minutely, by their knowledge that Tua didn’t reach expectations and Ibeabuchi imploded in felonious fashion.
Journalists have to be able to rely on documents to craft a viable analysis of past goings-on and, lucky for me, some lad with a VHS collection was kind enough to furnish the real-deal Holyfield of Tua-Ibeabuchi showings. Thanks, bro.
Michael Woods finally went bonkers today when he went to post something on Twitter and a Coyote Duran tweet popped out. Freaking new commentary, man.