Pacquiao-Bradley III is on…or is it? 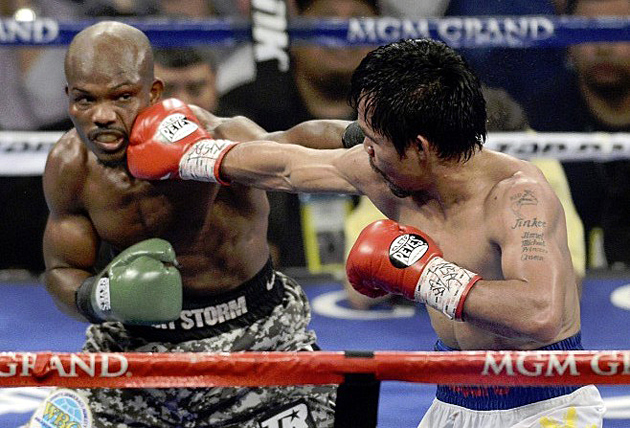 You have seen them do the dance for 24 rounds and they will engage in another batch on April 9.

Manny Pacquiao, the fighting Congressman from the Philippines, will once again attempt to better Timothy Bradley, the hard-headed Californian, and they will try to break a 1-1 tie.

Their first battle took place in 2012 and everyone and their brother, basically, thought Pacman would have his hand raised after the 12 rounds. But the judges, two of them, said otherwise. They awarded Bradley a split decision and Boxing Nation roared in horror. CJ Ross and Duane Ford wore smudged glasses when they watched that face-off, many seethed.

Bradley won but the experience left a bad taste in his mouth. He even received death threats, he said, and he looked to put a firmer stamp on the deal when they re-matched in April 2014. This time, the judges got it right, all agreed, with Pacman winning a 12-round unanimous decision, 118-110, 116-112 twice.

This April, Bradley is the hotter boxer, coming off a December win over faded Brandon Rios in Vegas (TKO 9). Now paired with combustible motivator extraordinaire Teddy Atlas, most figure that his motivation level will be at beyond-peak, and some think he’s catching Manny at the right time. Pacman is coming in off a loss to this generation’s “TBE,” Floyd Mayweather Jr., but, more potentially worrisome to PacNation than that, he hurt his right shoulder before the May tangle. He tore it up worse in the Mayweather bout and then had surgery afterward. Will he be fully ready to rock in April, after such a lengthy layoff? He’s looking at a Senate run; will his eyes be on the boxing or the political prize?

Pacman, who turned 37 on Dec. 17, is now 57-6-2 (38 knockouts) and has indicated this third Bradley scrap will be his farewell fight. Bradley, age 32, owns a 33-1-1 (13 KOs) mark and might be at or near his peak physically. Many fans would have liked young gun Terence Crawford to get this gig; promoter Arum seemed to seek that, bringing it up to me before the Mayweather-Pacquiao bout. But the known quality, in Bradley, got the nod. No surprise…The known entity oftentimes gets the love when there is a choice to be made because name recognition is of paramount importance in attracting the more casual boxing fan.

As of Wednesday at lunch time, Staten Island-based trainer Atlas told me he hadn’t been informed that Bradley and him were a lock for the slot, so it looks like some deets need to be ironed out.

Readers, talk to us…What are your thoughts on this tangle? Did you hope and seek Crawford to get the adios fight invite? Does the presence of Atlas and Manny’s injured wing make Bradley the favorite?

He’ll never admit it but Michael Woods was really gunning for that final opponent spot against Manny Pacquiao. Any opportunity to further injure the right wing is fine by him.