From THE RING Archives: A unique look at Louis-Schmeling II 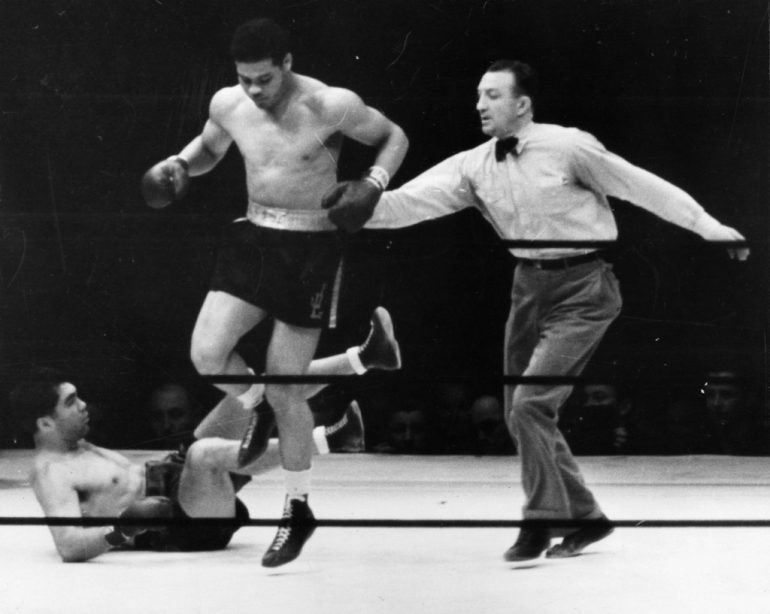 Louis decks Schmeling and the end is near. Photo from The Ring archive
16
Dec
by Tom Gray

This is the first in an occasional series. The excerpts below originally appeared in the July 1938 issue of THE RING Magazine. It was authored by Nat Fleischer, founder of THE RING. It is being represented to RingTV.com readers by Tom Gray.

In June 1938, the undisputed heavyweight champion of the world was Joe Louis. “The Brown Bomber” was a devastating puncher who carried technical mastery and ring savvy that is still revered by fight fans, 80 years on from the legendary American’s glorious prime.

With World War II imminent, Louis signed on to face the only man who had ever bested him in a prize ring, the German technician, Max Schmeling. The former heavyweight champion had knocked out Louis in 12 rounds, utilizing terrific counter right hands and uppercuts to the head in a memorable battle that was voted THE RING Fight of the Year for 1936.

Two years on, however, Louis had won the championship from Jim Braddock, defended it on three occasions, and polished his game to a level of excellence that had never been seen before.

At Yankee Stadium, amidst a backdrop of world pressure and political intensity that is impossible to imagine, Louis destroyed Schmeling in the rematch, flooring his opponent three times on the way to a savage first-round knockout. The date was June 22, 1938, and the official time was 2:04.

The following is a detailed analysis of both fighters as it appeared in THE RING magazine just weeks prior to this historical and unforgettable contest. Also included is a fight prediction from editor-in-chief Nat Fleischer who had been at the helm of ‘The Bible of Boxing’ since its inception in 1922 and continuing until his death in June 1972.

Was born at Lafayette, Alabama, May 13, 1914. Christened Joseph Louis Barrow. Stands 6ft 1 ¾ inches and scales 204 pounds. Started his boxing career as an amateur. Won light-heavyweight National tournament in 1934. Was Golden Gloves titleholder. Is under the management of Julian Black and John Roxborough, and all of his promotion is handled by Mike Jacobs. 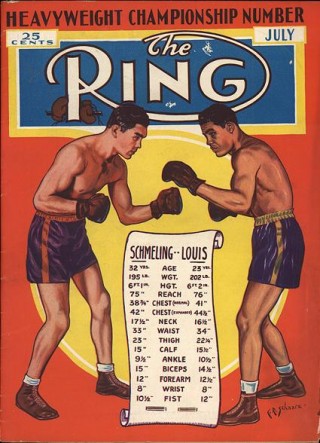 Began his professional career on July 4, 1934, at Chicago when he knocked out Jack McKracken in one round. Scored forty-three knockouts, won seven decisions and lost four bouts in a total of fifty-four contests as a simon-pure. As a professional, he has had thirty-seven fights, exclusive of those billed as exhibitions, and of that number he has scored twenty-eight knockouts, won eight decisions and was knocked out once. His other knockouts in contests listed as exhibitions.

He is the biggest money-maker since Tunney and Dempsey and his record for gate receipts exceeds that of any other fighter in the history of pugilism for the short period during which he has been fighting. Most lucrative fight, that with Max Baer. Gross $932,944, exclusive of motion picture and radio rights that brought total beyond the million dollar mark.

First colored fighter since Jack Johnson to win world heavyweight crown. Rated one of the heaviest hitters of all time. Can hit with either hand.

Suffered only setback at hands of Max Schmeling. Was stopped in twelfth round. Won title from Jimmy Braddock in Chicago after Joe’s kayo by Schmeling. Knocked out champion in eighth round.

Considers his fight with Jack Sharkey his toughest. Is of boxer-hitter school of boxing.

Only fault in his boxing is his stance. Gets off balance after delivering punch, unlike Jack Johnson, Fitzsimmons and Corbett, who had perfect stance. Is slow thinker. His leading knockouts other than the fights already named are over Eddie Simms, 26 seconds; Charley Retzlaff, 1 m. 25 secs; King Levinsky, 2m. 21 secs; Max Baer, 4 rounds; Jack Sharkey, 3; Jorge Brescia, 3; Nathan Mann, 3; Harry Thomas, 5. He won decisions over Bob Pastor, 10, and Tommy Farr, 15 rounds.

Is married. Has no children. Is soft-spoken. Athletically inclined. Loves music and baseball. Owns a softball team, the Joe Louis Tigers.

He was born at Klein-Luckow by Prenzlau, Germany, September 28, 1905. Was christened Maximilian Schmeling. Six feet one inch, scales 195 pounds. Managed by Max Machon in Germany and Joe Jacobs on America. Won the middleweight and light-heavyweight championships of Germany as an amateur prior to turning professional in 1925.

Fought nine professional fights, losing one to Jack Taylor, an American, before he gained his first championship by beating Max Diekman for the light-heavyweight crown of Germany. In 1928, was stopped by Gypsy Daniels in one round. 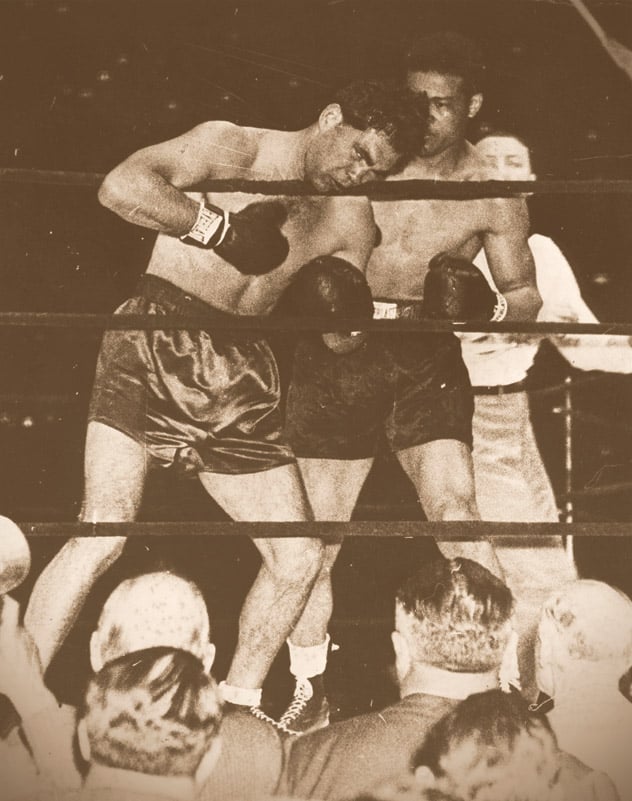 Came to America at the call of Tex Rickard in 1928. Knocked out Joe Monte in first start in Garden in eighth round. The following year win from Joe Sekyra in ten, Paulino (Uzcudun) in fifteen, and knocked out Petri Corro in one and Johnny Risko in nine.

Won the world heavyweight title on a foul from Jack Sharkey in final of elimination tournament at Yankee Stadium in 1930 and lost it to Sharkey in Garden Bowl in 1932 in fifteen rounds.

Then came fight with Joe Louis. Sensational affair with terrific hitting. Both badly hurt. Louis knocked out in twelfth round. Gained challenger’s post for fight with Braddock for world title. Braddock refused to meet him. Max trained for “phantom fight”, weighed in on scheduled day, but didn’t get the chance at crown. Louis got it instead.

Went back to Germany disheartened. Returned to America. Continued to keep in spotlight by scoring knockout of Harry Thomas in eight rounds. Then won decision over Ben Foord in Hamburg in twelve rounds and knocked out Steve Dudas in Hamburg in five rounds. Now back in U.S. training for his return fight with Louis for world crown.

Is handsomely built. A sportsman. Fine hunter. Soft-spoken. Gentlemanly. Profuse reader. Is married to screen star, Anna Ondra. No children. Has played with her in movies. Loves outdoor life. Keen student of motion pictures. A hero in Germany.

I believe the fight will not go the limit. I foresee a knockout and it will be scored by Louis within twelve rounds. If I’m wrong, mates, it won’t be the first time. Like other critics, occasionally I’ve fallen by the wayside in my selections. My choice is based on my honest opinion with neither race, color or creed playing any part in influencing me.

Louis goes into the fight the youngest champion to ever win the heavyweight title of the world and the youngest to defend it. He already has set a record by defending it successfully three times – against Farr, Mann and Thomas, in less than a year and whether he wins or loses, he’ll go down in history as the “fightingest” champion of modern times.

Coming down to a summary, we find on the one hand the physical advantages resting with Joe, the mental and psychological with Schmeling.

Each carries a knockout punch, but Joe carries more T.N.T. in either hand than his rival.

It is my belief that the champion has learned how to protect himself against the devastating right of the German, but Schmeling doesn’t think so.

Selected vintage issues are available from THE RING SHOP.