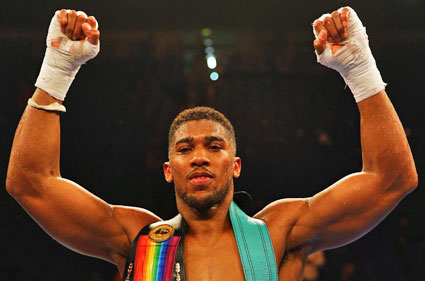 Anthony Joshua: Joshua couldn’t have had a much more productive night than he did against Dillian Whyte on Saturday night at the O2 Arena in London. Another quick, effortless knockout would’ve added to the 2012 Olympic champion’s glossy resume but wouldn’t have served him otherwise. He had to work hard against his best-ever opponent, Whyte, who forced him to go beyond the third round for the first time in his young career. Joshua (15-0, 15 knockouts) might’ve learned more in six-plus rounds against Whyte than he did in his first 14 professional fights. He fought recklessly early in the fight, obviously feeling invulnerable. Then Whyte, fearless and remarkably resilient, set him straight with a knee-buckling left hook. A shocking upset suddenly seemed like a realistic possibility. Joshua used his brain as much as his brawn after that, though, picking his spots more thoughtfully and – while still facing fierce resistance – ultimately breaking down Whyte, which led to a brutal seventh-round knockout. Good learning experience, good victory. The natural question afterward: Is he ready for countryman and new heavyweight champ Tyson Fury? I’m not sold on Fury, who is big and clever but nowhere near as gifted as Joshua. At the same time, Joshua demonstrated against Whyte that he has plenty of room to grow. I can see a Fury-Joshua fight in 2017 if they both continue to win, which would give Joshua a chance to develop further against elite opposition. Imagine how big that would be in the U.K. Joshua reportedly has his sights set on former world title challenger Dereck Chisora for his next fight. Another learning opportunity.

Whyte (16-1, 13 KOs) ended up a helpless heap on the canvas but did enough for most of the fight to make a statement. The Jamaican-born Brit has some ability, can punch hard and has a ridiculous chin. He took some crazy shots. I think he’ll be seen as a legitimate opponent for top heavyweights, at least for now. ÔÇª The Joshua-Whyte card was stacked. The big winners were Tony Bellew, Chris Eubank Jr. and Paulie Malignaggi. The biggest loser was Luke Campbell. ÔÇª Bellew (26-2-1, 16 KOs) proved to Mateusz Masternak (36-4, 26 KOs) that acting (“Creed”) is just a hobby, defeating the Pole by a unanimous decision in a taxing fight to win the European cruiserweight title. He also bolstered his position as a world title contender. ÔÇª Eubank (21-1, 16 KOs) stopped Gary O’Sullivan (22-2, 15 KOs) after seven rounds in an entertaining fight, moving him closer to a world title shot. Eubank has stopped three opponents since he was outpointed by Billy Joe Saunders in 2014. ÔÇª The Italian-American Malignaggi (35-7, 7 KOs) demonstrated his versatility. He realized a dream by winning a European title, outpointing Italian Antonio Moscatiello (20-3-1, 14 KOs) to capture the EBU welterweight title, and then settled into the analyst’s seat for the television broadcast. ÔÇª Now we’ll see what Campbell (12-1, 10 KOs) is made of. The Olympic champion from the U.K. lost a split decision to veteran Yvan Mendy (33-4-1, 17 KOs), after which he acknowledged that he made mistakes. The guess here is that he’ll get back to work, solve those problems and come back better than ever. ÔÇª Former contender Kevin Mitchell (39-4, 29 KOs) might be finished after getting stopped by hard-punching Venezuelan Ismael Borroso (19-0-2, 18 KOs) in five rounds on the London card, Mitchell’s second consecutive KO loss. ÔÇª

I don’t really know what to say about Roy Jones Jr. (62-9, 45 KOs) at this point. I’ll say again that I recognize the 46-year-old’s right to fight as long as he can pass a legitimate physical, which I presume he did before he was brutally knocked out by Enzo Maccarinelli (41-7, 33 KOs) on Saturday in Moscow. Neither I nor anyone else has to watch. That said, it’s natural to feel sadness that a once-great fighter – one of my personal favorites – has been reduced to this. I know I’m not alone when I say I wish he’d stop. ÔÇª Bigger doesn’t mean better for Omar Figueroa, who didn’t look good in a unanimous-decision victory over fading Antonio DeMarco (31ÔÇö6-1, 23 KOs) on Saturday in San Antonio. Figueroa (26-0-1, 18 KOs) weighed 151 pounds, 9¾ more than he has ever weighed for a fight. We’ll see whether it was just an off night or worse. ÔÇª Oscar Valdez (18-0, 16 KOs) demonstrated again that he’s one to watch, stopping Filipino journeyman Ernie Sanchez (15-7-1, 6 KOs) in three rounds Saturday in Tucson, Arizona. I look forward to seeing how the Mexican fares against an elite opponent. ÔÇª How things have changed for Nonito Donaire (36-3, 23 KOs). The onetime pound-for-pounder regained the WBO junior featherweight title by outpointing Cesar Juarez (17-4, 13 KOs) on Friday in Puerto Rico but it barely caused a ripple. Perhaps it was a step back toward the relevance he once enjoyed. ÔÇª Former welterweight titleholder Victor Ortiz (31-5-2, 24 KOs) made a successful return to the ring, stopping a reluctant and ill-prepared Gilberto Leon (33-14-2, 13 KOs) in eight rounds on the San Antonio card. Ortiz has fought only twice in two years but is still only 28.