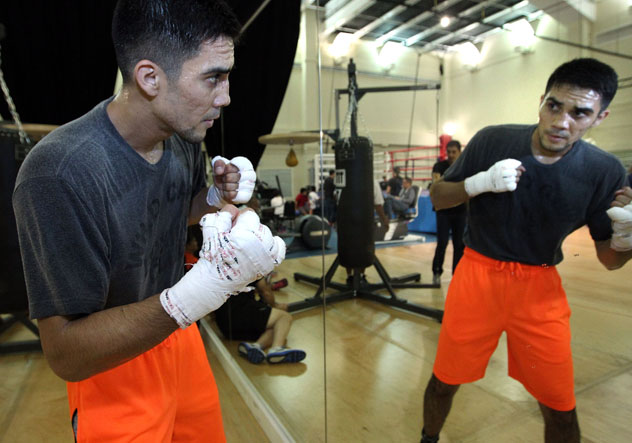 There were no in-betweens in Antonio DeMarco’s 3-3 streak over the past three years. He either won in decisive fashion or was soundly beaten in fights in which he was expected to be much more competitive. But after enduring a long list of heartbreaks and briefly calling it quits after his last loss, the former WBC lightweight titlist from Mexico is ready to step into the ring again this Saturday against unbeaten sensation Omar Figueroa (25-0-1, 18 knockouts). The bout will take place on a Premier Boxing Champions on NBC (8:30 p.m. ET/5:30 p.m. PT) card from San Antonio’s AT&T Center in what amounts to a do-or-die return after a six-month hiatus that included a cancellation and a rescheduling of this very bout, which was supposed to take place back in September.

After a long history of hard-fought battles, DeMarco welcomed the extra rest period with open arms.

“I’ve worked hard for about three-and-a-half months for this fight,” said DeMarco (31-5-1, 23 knockouts). “I am at peace. I believe I needed this tranquility and more so after my last few fights. But I believe God has straightened my path and life is smiling at me again.”

DeMarco’s reasons to smile have been manifold lately and their amount matches almost exactly the number of reasons that drove him to retirement in the first place.

“It was a time thatÔÇªI wouldn’t say it was rough or difficult but I call it a learning process,” said DeMarco, with a heavy sigh. “What God has put in my path has been tough. I had a few family problems. I split away from Romulo (Quirarte, his first trainer and mentor). I lost my title. I had a few problems at home and then my sister was diagnosed with cancer. There were a few episodes in my life that led me to think about retirement. But God and life had a different path for me to follow.”

After such a terrible period in his life, the fighter took some time off to ponder his future chances and question his spiritual motivations to move on and he got his answers all in rapid succession.

“I entered into a spiritual retreat and all I asked was, ‘Dear God, if you want me to continue fighting send me a signal,’ and, as soon as I left the retreat, I got the offer for this fight with Omar Figueroa. A few days later, I spoke to Don Romulo and our relationship blossomed again. And things started to happen for me. And on that same day also I got a call from my sister saying that she was cancer-free. What else can I ask life to give me as a signal to return to boxing?”

The signals for him to retire, however, were there all along in the form of several heart-breaking losses late in a career in which he first won the lightweight title in 2009 against Jose Alfaro only to lose it in his first defense against Venezuelan punching machine Edwin Valero. DeMarco would recover the belt in an epic, come-from-behind win over Jorge Linares, scoring a gory, cut-induced stoppage in 11 rounds, and would reach his peak with a demolition of highly-regarded contender John Molina Jr. in the first round.

After losing the belt to Adrien Broner, DeMarco moved up to 140 where he lost back-to-back to Jessie Vargas and Rances Barthelemy after scoring three confidence-building wins and subsequently retired after the Barthelemy loss.

“As they say, the timing of God is perfect,” said DeMarco. “I believe it was perfect for me. I was able to train with more time, more patience. We had much more preparation. I cannot complain. I am well, both physically and mentally. I am training with my entire team, with the trainer that has been with me since my beginnings and who made me a two-time champion. There are many favorable things. I respect Figueroa outside the ring because we’re both fighters but up there we both want to win and the best one will win.”

Wishful thinking aside, the fighter believes he has real chances of success in a fight in which, should he lose, he will begin to be considered a steppingstone for young talents.

“It is a tough challenge but not impossible. It is an even fight for both of us,” insists DeMarco. “I have the experience. I feel renewed. I am only 29-years old. He is younger than me and he’s undefeated. We both have our pros and cons. I believe it is a very even fight and a very attractive fight for the people. But a lot of people think that I am coming to lose this fight and I am aware of those expectations. But that motivates me. I talked to my family about my comeback and they have supported me. And I only need their support to get up in the ring. I don’t care what people say. Luck favors those who work hard in the gym.”

When asked to outline his strategy for the bout, the answer was simple: the Mexican one.

“We know the fight will be tough because we know that we both like to go toe to toe. I believe we’re not going to have time to study each other. Most of the time, you go in with a game plan that later has to be changed because the opponent is different from what you thought. As rounds progress, we’ll make the necessary adjustments.

The extra weight he’ll carry into the ring does not appear to be a concern for him after almost an entire career fighting below the 135-pound limit.

“We’re fighting at 143 pounds but we’re doing great in that department. Why? Because of my great preparation. They even opened the Charleston mountain path here in Las Vegas to allow me to train there. I am very well, physically, very strong.”

As tough as it may sound, DeMarco may very well have what it takes to take down Figueroa but the rest of the division will prove a challenge for a fighter with so much rough mileage as DeMarco.

“It is a very tough division right now,” said DeMarco, when asked about his outlook for the elite 140-pound division. “I don’t want to make predictions. My mind and my soul are focused on Omar Figueroa only. That’s my goal. I know God will give me the strength to find more challenges after that one because I believe I deserve it as a fighter and as a person.”

Win or lose, it is likely that DeMarco will choose to fight on, considering the renewed commitment he has drawn from the struggles he had to overcome outside of the ring.

“My motivation is in my daughters and my wife, my family, my parents, my sister who fought and defeated cancer and is still fighting. If she was able to fight for her life, how wouldn’t I fight for my career and my dreams as well? This is a lot of motivation to me. I hadn’t felt so motivated in many years. Boxing has given me everything. It took me away from the streets; it has given me whatever little I have in life, my wife, my daughters, my house, food on the table. I have a lot to thank to boxing. People have asked why I came back. Well, you will find out on Saturday night.”