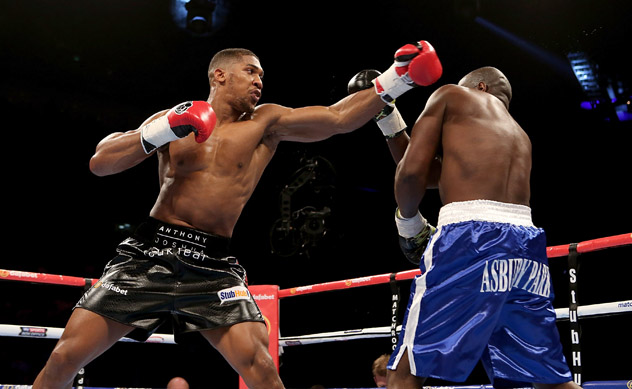 Anthony Joshua has told Dillian Whyte that his amateur win will count for nothing when they clash in London on Saturday night.

Joshua and Whyte will meet for the British and Commonwealth heavyweight titles and with Tyson Fury’s world title win shifting the power-base of the division to the U.K. – both men know victory will put them in a great position for major fights in 2016.

Whyte is a significant underdog but has handled himself well during the build-up by consistently reminding Joshua that he defeated him in the amateur ranks.

“He’s trying to get me to abandon my game plan but it’s not going to affect me,” said Joshua, who is rated No. 10 at heavyweight by THE RING.

“I am looking to box clever, pick my shots and break him down. There’s only so many clean shots you can take at heavyweight. I think he’s capable of taking me past three rounds, but that will be his only achievement – he’ll be the first man that took me past three rounds.

Joshua continued, “The amateur win has given him some belief and mentally he’s living off that. When I turned pro, Lennox Lewis said to me: ‘Forget what you did as an amateur, you’re a pro now.'”

The 26-year-old has not looked like reaching the fourth round once since making his pro debut in October 2013, but Whyte claims that he is yet to face a ‘young and live opponent’.

“He’s said that I have only fought old men – it’s all talk,” said Joshua. “I don’t see any champions on his resume. I corrected him and said that’s why he’s here too. I hear the same thing every time, that I haven’t boxed anyone yet, it’s repetitive, but when I beat a young and hungry guy like Dillian, the next opponent will have to come up with something else.

“I’ve been looking after myself better, getting my rest and hydrating right. I know that this is a massive fight for me. I’m still going out there with the same attitude and the same intentions, and hopefully I’ll finish it in the same style that I’ve been doing.”

Anthony Joshua vs. Dillian Whyte which will be contested for the British and Commonwealth Heavyweight titles. The show is available in the U.K. via Sky Box Office.