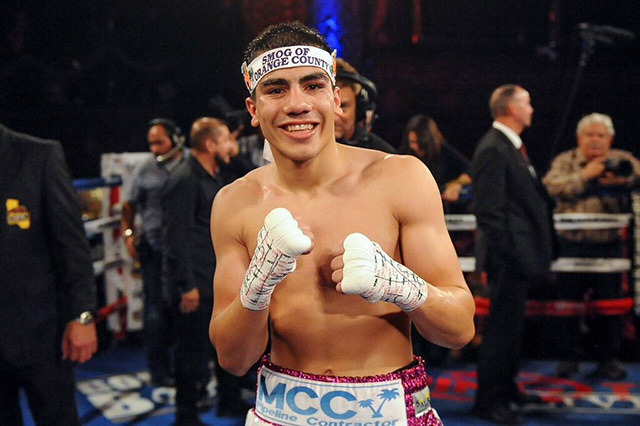 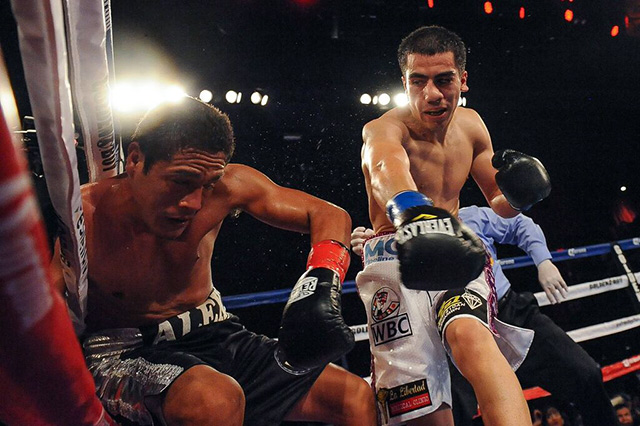 Christian Gonzalez nails Alejandro Ochoa with a right hand shortly before stopping the spoiler in the second round of their “LA Fight Club” main event on Dec. 4, 2015. Photo by Tristan Bellisimo/Golden Boy Promotions

LOS ANGELES – Lightweight prospect Christian Gonzalez may get out-boxed or out-hustled at times, but he can always rely on his power to change the course of a fight.
Gonzalez displayed that power, dropping and eventually stopping rugged spoiler Alejandro Ochoa in the second round before a sold-out crowd at the Belasco Theatre on Friday night. It was the main event of the final “LA Fight Club” show of 2015.
Gonzalez goes to 12-0, 11 knockouts, while Ochoa drops to 7-11-2, 1 KO.
Ochoa’s record was somewhat deceiving. He entered the bout against Gonzalez having won four of his previous five bouts. In his most recent bout on Oct. 3, Ochoa won a six-round majority decision over Philadelphia prospect Kevin Rivers Jr., who was previously unbeaten.
From the opening bell, Ochoa hung in there with Gonzalez, landing straight left and rights that split Gonzalez’s guard.
Midway through the opening round, Gonzalez stunned Ochoa with a right uppercut to the head, sending Ochoa back against a corner. Ochoa recovered, even landing to the body when both exchanged in the middle of the ring.
Ochoa continued to play with fire, eventually getting burned midway through the second round, as a right uppercut staggered Ochoa against the ropes. Moments later, another right from Gonzalez dropped Ochoa flat onto his back.
Ochoa attempted to hang on, but Gonzalez strength proved to difficult to overcome. A combination sent Ochoa reeling against the ropes, where Gonzalez followed up. Referee Raul Caiz, Jr. saw enough, stepping in and stopping the bout at 2:13.
Negrete stops Guerrero
Bantamweight prospect Oscar Negrete stopped veteran Ernesto Guerrero near the end of the third round.
With the win, Negrete improves to 12-0, 5 KOs, while Guerrero drops to 20-17, 13 KOs.
Guerrero was able to utilize his distance during the opening stanza, but Negrete eventually closed the distance between the two. Negrete began landing the more effective punches as the bout progressed, putting Guerrero on the defensive.
Negrete continued to press the action, landing thudding punches onto Guerrero. Towards the end of the third round, a barrage of punches, culminating with a right to the stomach dropped Guerrero to one knee. Guerrero stood up, but referee Wayne Hedgpeth saw enough, waving the fight over at 2:51.
Delgado tops Lizarraga
Junior lightweight Ivan Delgado dominated Luis Lizarraga Jr. through six rounds, winning a one-sided decision.
Delgado improves to 8-0-1, 2 KOs, while Lizarraga falls to 5-7-1, 2 KOs.
From the opening bell, Delgado could not miss with repeated left hooks to the head of Lizarraga. While Lizarraga seemed to take the punches well, he never made the adjustment to keep his right hand up to protect himself from those left hooks.
Lizarraga attempted to mount attacks every so often, but Delgado quickly put Lizarraga on the defensive with repeated left hands along with occasional right uppercuts to the head.
All three judges scored the bout 60-54 in favor of Delgado.
In preliminary action:
– Featherweight Nicolas Arce (6-0, 6 KOs) won by technical knockout in the second round when Ali Gonzalez (6-8-1, 1 KO) was unable to continue due to back spasms
– Featherweight Emilio Sanchez (11-0, 8 KOs) overwhelmed Juan Hernandez, knocking him down and out with a left hook to the head in the opening round. Time of the knockout was 2:05.
– In the opening bout of the Golden Boy Promotions card, super flyweight Joshua Franco (3-0, 2 KOs) knocked out Leonardo Reyes (3-8, 1 KO) at 2:19 of the first round.
Francisco A. Salazar has written for RingTV since October of 2013 and has covered boxing in Southern California and abroad since 2000. Francisco also covers boxing for the Ventura County (CA) Star newspaper, Boxingscene.com, and Knockout Nation. He can be reached by email at [email protected] or on Twitter at FSalazarBoxing