Bryant Jennings: ‘Luis Ortiz has to beat me if he wants recognition’ 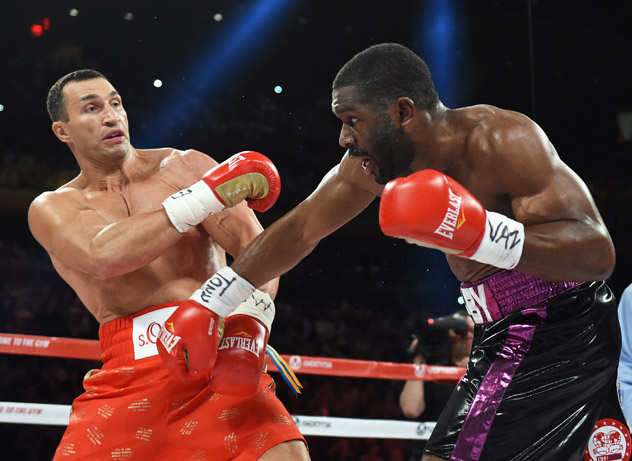 The heavyweight landscape changed significantly last weekend when newly-crowned RING champion Tyson Fury upset Wladimir Klitschko, ending nearly a decade-long reign atop the division. This makes the stakes for the Dec. 19 bout between Bryant Jennings (19-1, 10 knockouts) and Luis Ortiz (23-0, 20 KOs) at Turning Stone Resort and Casino, Verona, NY., even greater.
Jennings is coming off an impressive performance, albeit in a loss, to Klitschko last April in New York City and the unbeaten Ortiz got the attention of a bloodthirsty crowd at Madison Square Garden when he annihilated Matias Vidondo on the Gennady Golovkin-David Lemieux pay-per-view undercard in October.
Jennings spoke to RingTV.com about his upcoming bout against the man they call “King Kong,” the demise of Klitschko and the current state of boxing.
Vladimir Lik: On December 19, you are facing Luis Ortiz. He has had some destructive knockouts as of late. How are you preparing for him?
Bryant Jennings: Are you sure they were destructive knockouts? I mean, were those opponents worthy? Did they look worthy to you? I don’t have the wool over my eyes and I’m sure you don’t either. Those mother****ers wasn’t s**t, so he will have to prove himself for me to pay attention and this is his first real fight.
VL: Golden Boy Promotions and HBO are very high on Ortiz.
BJ: They have to be because they already invested a lot in him. I just don’t like people acting as if this dude has done some great things in his career. We all see what the truth is. This is his first real fight. He can’t keep thinking he can just go beat up on bums and get the recognition for that. No buddy, he has to beat me if he wants recognition.

VL: You are very careful what you put inside your body, so what do you make of Ortiz being suspended for eight months after he tested positive for taking a banned steroid?

BJ: Anyone who feels they need an enhancement, which is illegal, has confidence problems. There’s something there, so there has to be a reason why he felt he needed to do that.

VL: I know VADA (Voluntary Anti-Doping Association) will conduct random blood and urine testing ahead of the fight. Are you worried something can slip through?

BJ: I’m not really worried but I’m sure they might try something slick. I see (Ortiz’s) reaction and his approach for this fight. He has these guys from his gym looking at my (social network) page trying to find psychological ways to penetrate my confidence. If they did their homework, they would know I’m not the person for that. I’m not the person to f**k with. He’s really a child. He’s 36 years old but he’s really a child and he’s a slave to me because they put him in a fight that I don’t think even he believes he’s ready for. The amount of time he’s been in the game and he’s probably saying to himself, “Why do I need this crazy fight right now?” They selling him a dream of being the heavyweight champion of the world, which is accomplishable but the road he is taking will give him a tough time.

VL: It’s been seven months since your loss to Wladimir Klitschko. What are some of the takeaways you had from that experience?

BJ: The real takeaway is (referee Michael Griffin) should not have allowed him to hold that much. The fact they allowed him to hold stopped me from letting my hands go and catch that mother****er with something and that’s the referee’s foul. He waited all the way until the 10th round to take a point away when it should have happened earlier because he was warned early enough. it was the fourth round that he got the final warning and the referee still allowed him to hold and I really didn’t like that. That’s Wladimir’s forte and, even with Fury, he tried to hold but couldn’t because of Fury’s size. Why don’t you just fight? I allowed myself to stay on the outside for the jab. If you take away his jab from my fight, then there weren’t many punches thrown and landed by him. I tried to work on the inside and score and then he would just hold me and the referee separates us and then I have to try to get back inside again? Really?

VL: If you can go back to fight night, what would you do differently?

BJ: I would just be ignorant and I probably would have f****ed the referee up. I have sportsmanship and I’m never ignorant in the ring. I always fight a clean fight but I should told the referee, “If you don’t do something, then I will.” I mean, I never would foul the referee but I would have had to do what I had to do. I had to be an a**hole. If you don’t want this fight to go my way, then watch what I do now.

VL: Klitschko landed some clean shots. Did they hurt you?

BJ: No, I felt nothing. When you are in shape, you don’t feel those punches as much. The only shots that hurt are the ones you don’t see.

VL: You landed your fair share of punches on him too.

BJ: People are looking for the quick knockout but it’s a gradual process to knock someone out. It’s not one punch and that’s if the people in the ring are in shape. Why do you think, in video games, they have the energy bar up top? When you get hit, the energy bar goes down until, finally, it’s all gone. We are professional athletes but some of these guys that everyone praises are not even on my level. I have broken people down without having to use all of my power. I wear them down and drain their energy and then they are ready to go. Some of the guys Klitschko fought came into the fight ready to go down.

VL: What did you make of Tyson Fury’s victory over Klitschko?

BJ: I don’t want get into it. It wasn’t my cup of tea. I didn’t like the performances, period, more so, Klitschko’s performance. I don’t know; he might be sick. Something might be wrong with him on the inside. He didn’t look right to me.

BJ: Yes, he hasn’t been himself. Something happened to him from the time he had the baby (with partner Hayden Panettiere) up until today.

VL: So when you look at the heavyweight division now, do you feel like Bryant Jennings can do some real damage?

BJ: I can always do damage. If the people in control allow the game to be set up correctly, then the answer is yes. The cards have to be played right. OK, even though I lost my last fight, I should be able to get back up but look what’s going on. I’m working my way back up against a person who didn’t really work his way back up. He had a (near) yearlong suspension, like you said, then he had two easy fights now he’s in (a contender’s) position. Damn, what the f**k do I have to do?. This is my fourth undefeated southpaw in my last 10 fights. Damn, I got to do this all over again? If I had it as easy as he does, I would stay at the top forever. I’m still at the top and I’m doing it the hard way but the correct way.

VL: So do you feel the business is getting in the way of what’s good for the sport?

VL: Just to play devil’s advocate, the sport is thriving now and there’s a fight on multiple networks almost weekly.

BJ: OK, how often do you get to see one of the Top 10 pound-for-pound fighters? The young guys are the ones who should be televised. They are the ones who are taking the good fights. Look, they are now starting to make better fights. You are seeing fighters from (under) the same business umbrella fight each other but not in the heavyweight division. Most of the resumes these heavyweights have is bulls**t.

VL: So speaking of not being under the same umbrella, do you feel that prohibits you from getting a shot at someone like WBC heavyweight titlist Deontay Wilder?

BJ: I think that fight will happen but, under what circumstance, I don’t know yet. I might need to look like sh*t for four fights and then get picked on by him.

VL: I imagine his level of opponents bothers you since he is a major heavyweight titlist.

BJ: That’s not a secret. That’s pretty obvious too. People are getting pumped up on terrible opponents. Look at my resume for a minute. Perez is a skilled fighter. Same for Artur Szpilka. Szpilka and Perez are fighters with similar resumes to mine. After I beat Szpilka, he went and retired (Tomasz) Adamek. Who did Wilder beat? What was Bermane Stiverne’s claim to fame? Chris Arreola. Please tell me, who did Arreola defeat? Adamek beat the sh*t out of him. (Former RING champion Vitali) Klitschko beat the sh*t out of him too. Then Arreola gets beat by Stiverne and Stiverne gets all the recognition but neither of them beat anyone. Boxing and matchmaking is like a tree. Matchmakers don’t just look at one fighter and that’s it. They are looking at BoxRec and they need to look at who the guy fought and then look at those opponents and who they fought. That’s how it has to happen. If you look at the bums these guys fought, you will see what I am talking about.

VL: Originally, Golden Boy was looking to make this fight for the Gennady Golovkin-David Lemieux undercard. I know you weren’t happy with the money then. What changed for it be made for December 19?

BJ: The difference is a lot of zeroes. When you have a resume like mine against a person like him, there needs to be a better offer and at least a negotiation. The fight did not get made because there was no further negotiation. That was another slap in the face. Like, really? You want to stop at $150,000? You gon’ start at $150,000 and stop at $150,000? You don’t think I’m worth more, even though I made 10 times as much for my previous fight and the world said I did real good. Did my stock go down? Show me where my stock went down.

VL: Your stock definitely did not go down.

BJ: And that’s why they came up.