A media spotlight shines on the Barclays Bunch 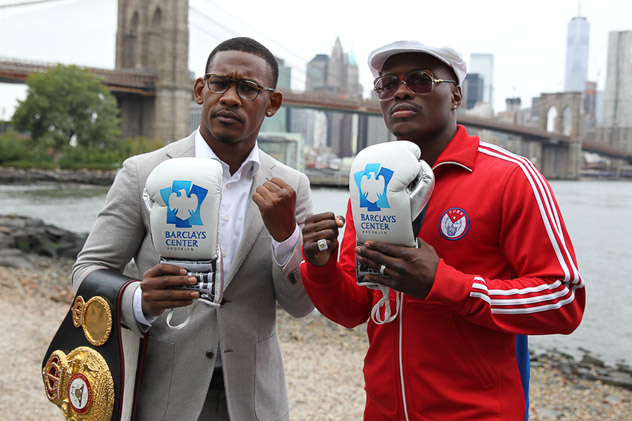 Daniel Jacobs (L) and Peter Quillin pose in front of the Brooklyn Bridge ahead of their Dec. 5 fight at Barclays Center. Photo by Ed Diller – DiBella Entertainment.

Both the headliners seemed loose, in decent spirits and both rolled with the punches, in the form of queries from boxing journos who gathered at the famed and fabled Gleason’s Gym in DUMBO, Brooklyn, on Wednesday afternoon.

Those looking for a hint on what the outcome might be, when middleweight Danny Jacobs (30-1, 27 knockouts) faces former WBO champ Peter Quillin (32-0-1, 23 KOs), well, I’m not sure they saw anything to work with. 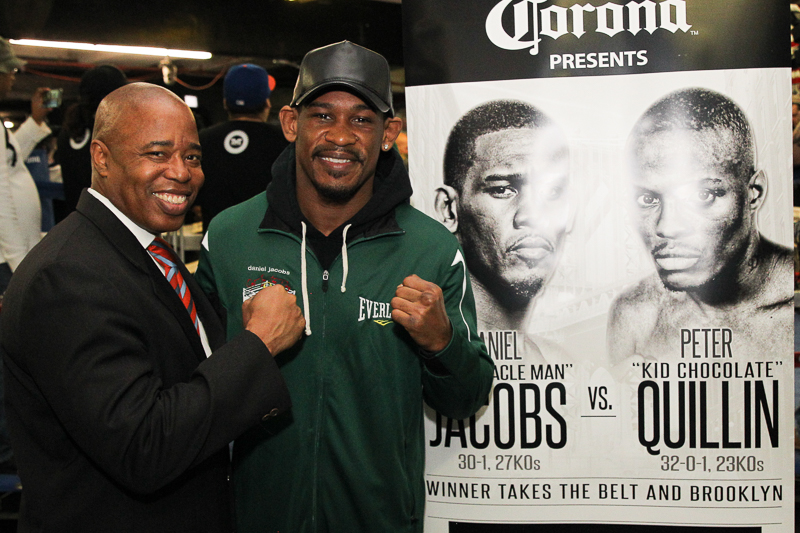 Jacobs was his usual safe self; his public persona is that of a self-effacing pugilist, a guy who knows he’s lucky, maybe, to be alive, let alone about to do his things on a pretty grand stage at Barclays Center and on Showtime. Post-cancer scare, the 28-year-old Jacobs is on a victory tour of life but isn’t content at smelling this current bunch of roses. He wants to keep on keeping on and his people are thinking a win over Quillin gets them to a place where the fans will demand a showdown with the feared Kazakh, IBF/WBA boss Gennady Golovkin. Jacobs laid out his affable side, then transposed it with his ring persona, when he said, “Me and Peter are cool…but we are looking to kill each other” Saturday night. It’s clear the guy is quick with a grin but he craves a win and knows his foe will be seeking to separate him from his senses. Indeed, he also knows fans are saying Sergio Mora had him down last fight but we shouldn’t read into that. “Quillin’s going to have to hit me to test my chin!” said Jacobs.

And for those thinking, assuming, that Quillin has the edge in pop in this promotion, put together by Lou DiBella, he said, “This is a boxer vs. a boxer-puncher. If I get a guy hurt, I can get a guy out of there as well. My punching power is there. I have more knockouts than Quillin and I’m going to be at my best on Saturday.” 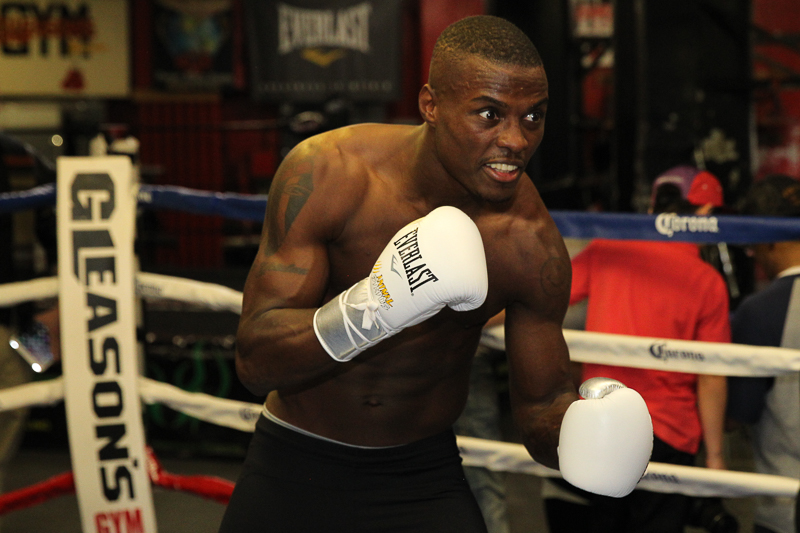 Quillin showed his typical brand of humility and casual cockiness, offered with tongue-somewhat-planted-in-cheek. I noted that he has a new strength-and-conditioning coach, the controversial Angel “Memo” Heredia, and he said that’s paid dividends and there will be no scale-fail come Friday. He cracked that he’d do his workout at Gleason’s shirtless, just for me – yahoo! – and wisely noted that, really, answers would be forthcoming Saturday. I asked if maybe he had had an edge, in that Jacobs has tasted loss before, being stopped in 2010 by Dmitry Pirog. Nah, “Kid Chocolate” said; his mom told him that sometimes you gotta get your butt booted to learn a needed lesson and to improve in areas in which you lag.

These guys have been friendly but that goes out the window Saturday.

“I’ve never been in this kind of moment before where I had to fight one of my friends,” the 32-year-old former beltholder said. You never want to hurt your friend but, in this fight, I want to hurt Danny, so what does that tell you about our friendship right there? Sometimes you don’t want to be friends with the guy that beat you up.” 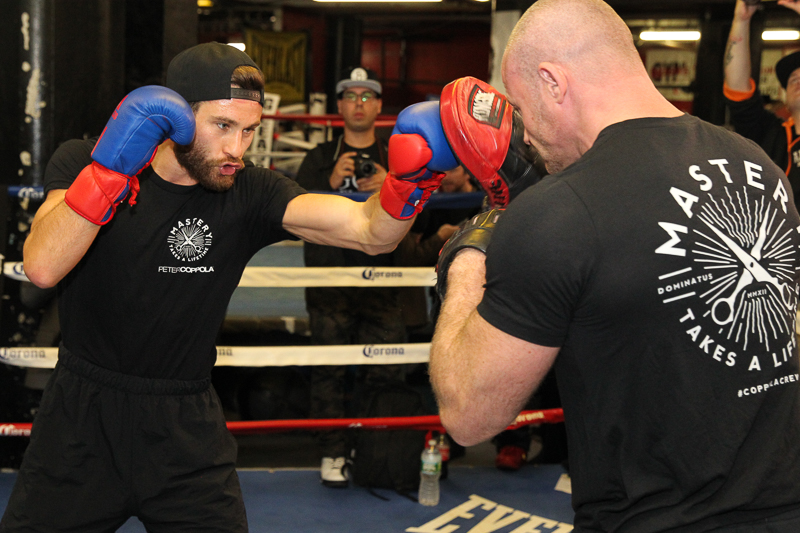 Undercarders chatted up the fight press as well; Chris Algieri had the press chattering about his musculature. His new strength coach has him looking strong and word on the street is that trainer John David Jackson has noted an uptick in power from the Long Islander. Algieri made sure to mention he does it naturally, within the law, and said he’s keen to show the world and his potential foes at 147 that he will be back on the headliner stage right quick. Ecuadorian Erick Bone, through manager Eli Mackay, told me he’s ready and willing and most able to out-box Algieri and spoil the trip from the Island to BK for Algieri rooters. 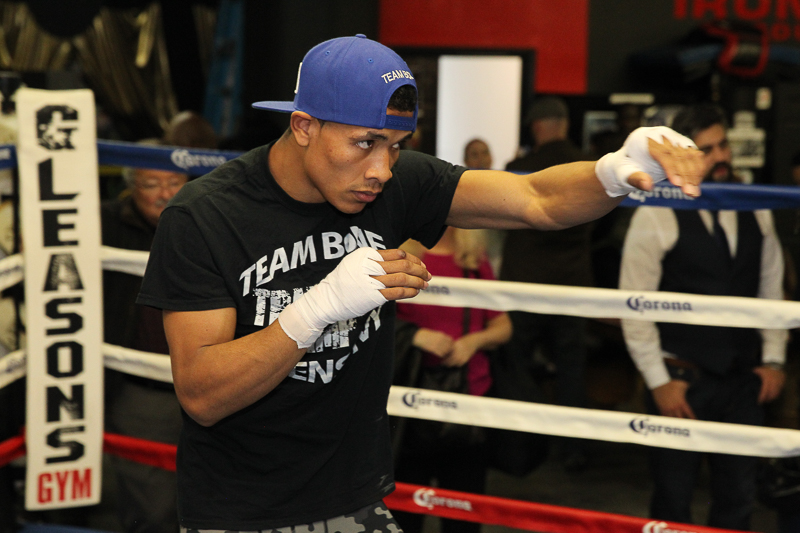 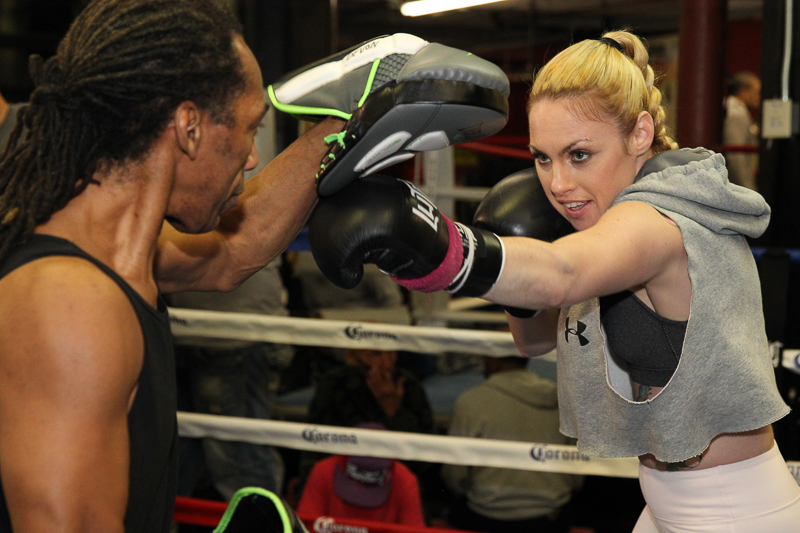 I did some Periscope streaming video of Heather Hardy and got more live viewers than in any interview I’d done on that app, which I’ve had for six months. She’s tangling with Noemi Bosques, in a rematch from a May scrap, which the Brooklyner, out of Gerritsen Beach, won via eight-round split decision.

Two stern looking light heavyweights, Will Rosinsky and Joe Smith Jr., talked up their chances on Saturday. Rosinsky is a fireman, who took time off from boxing to fit himself firmly into that fraternity. He thinks he has the experience edge in big fights and can handle Smith. 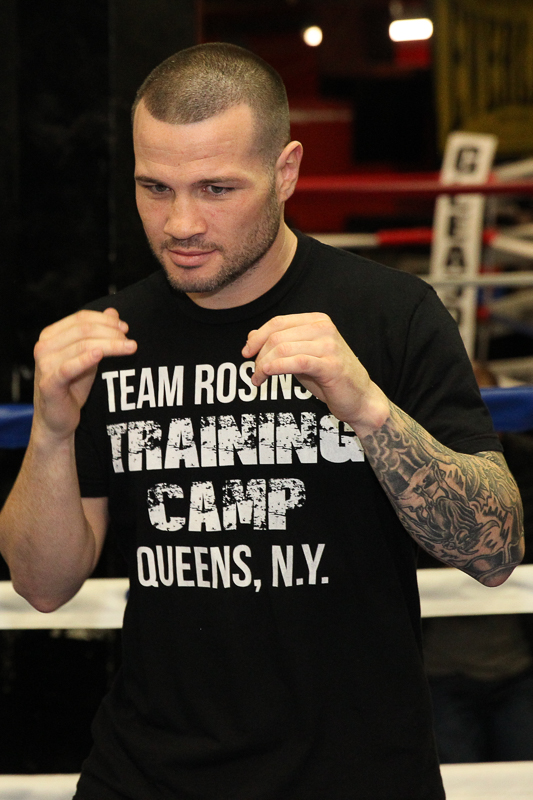 “There are actually some similarities between fighting and being a firefighter because it’s a controlled chaos, as they say,” Rosinsky said. “Same idea with the fight, you’re going crazy in your head but you’ve got to stay controlled and stay on your game plan. If your corner tells you something, you’ve got to take that in and use it for the next round.” 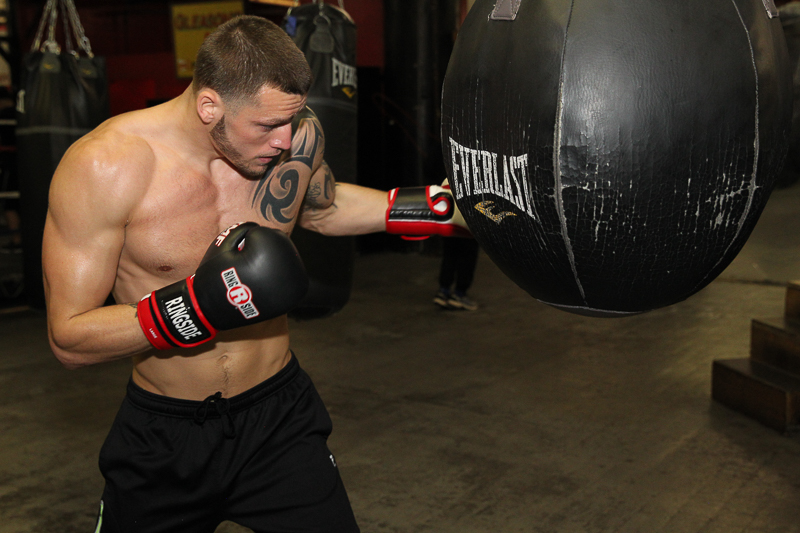 Smith, with trainer Tommy Gallagher watching over him, said he expects to be too strong for Rosinsky and seeks to stop him.

“I predict that there’s going to be a lot of punches thrown,” he said, “and, most likely, at some point in the fight, I’m probably going to hurt Will and get him out of there.” 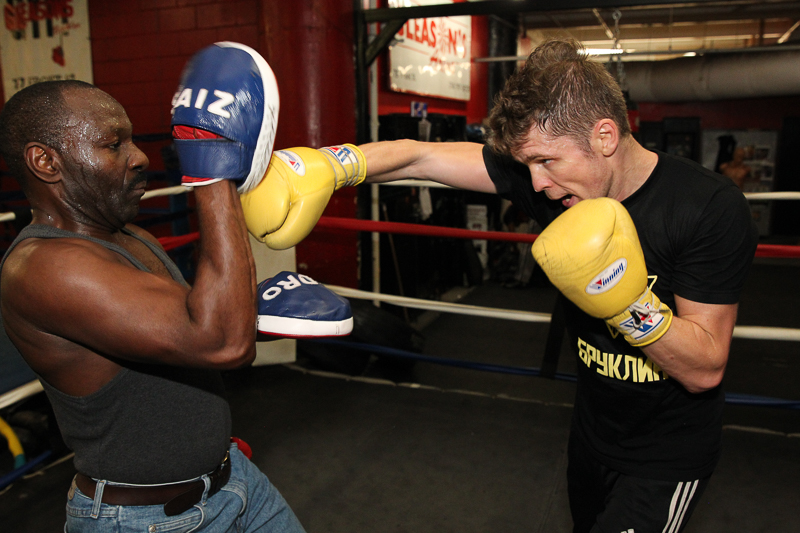 Not to be overlooked, the fighting rabbi and boxing pride of Park Slope, Yuri Foreman, said he’s back to finish his task. That being, he wants to win another world title. He’s in with a rugged journeyman Saturday and, after maybe three fights, he said, he’d love a rematch with Miguel Cotto.

Optimism reigned three days before the moments of truth would emerge; everyone spoke of being on message and the imminence of triumph. Some of them will be proven poor predictors.

Realizing this was all going down in Brooklyn, Michael Woods’ hometown, our fearless scribe looked around frantically. With tears in his eyes, Woodsy hollered, “This is mine! ALL mine!!” before fainting.