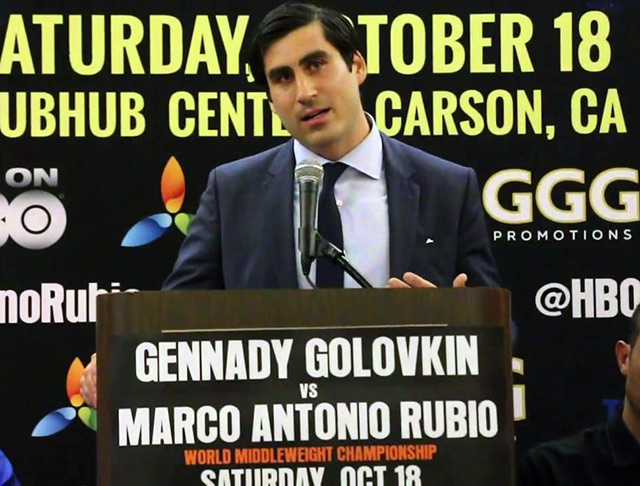 Photo courtesy of HBO
01
Dec
by Doug Fischer
“Score one for the journalists!” I bellowed when I got the new boxing boss at HBO, Peter Nelson, on the line Tuesday after lunch.

The ex-journo, just named Executive VP of Sports at the cabler, who will be responsible for day to day decisions on what fights we fans see, laughed heartily.

Nelson, at HBO since 2011, enjoys a reputation as an intellectual who, crucially, cares about the sport and the matches and his mission from the ground up. He knows what he sees in a ring, has a solid nose for who is good, and who isn’t, in my estimation, so this appointment could bode well for you the fan.

He was in a humble, team-player mode when we chatted. He said that “we have an experienced team here at every level of the company and this is not a one-man job, it will be a collaboration across the board.”

The Massachusetts native said he is “honored to lead this team effort,” and I asked him what this era could end up looking like. The programming behemoth had Seth Abraham, then Ross Greenburg, and most recently, Ken Hershman responsible for decision making in the boxing space. I asked what Nelson might want to do, and what maybe he’ll do differently than what we’ve been seeing. “Our subscriber base is a sophisticated group,” he said. “They prize authentic competition, quality competition, and our objective is always taking best care of that viewer. We want to feature fighters at their pinnacle, the apex of their skills, and for them to fight the toughest challenges put in front of them.”

Music to my ears…

He listed Canelo Alvarez, Gennady Golovkin, Terence Crawford, Sergey Kovalev, and also Roman Gonzalez, as assets on the table, ready to be presented to subscribers.

I told Nelson I’d prefer there be less of an emphasis on placement of premium fare on PPV, and to have more A grade scraps end up on HBO “regular.” Does he share that POV? It feels like it..

“Our goal is to best serve the subscribers,” he told me. “When we can make those fights on the network, we make every effort to do so!”

He mentioned the programming aside from the live fights, the 24/7s, and Two Days, and Fight Games, as continuing to be a focal point for the cabler. When a fight is deemed to transcend the typical viewership bubble, then we would be seeing it on PPV, he said, and he wants the best of those to be supplied by HBO.

Asked to tease what the first quarter, and the year in boxing 2016 might look like, the new boxing boss proved to be defensively adept. He mentioned the Dec. 19 Boxing After Dark show, topped by a Bryant Jennings-Luis Ortiz tangle, and several slots on HBO Latino.

Looking ahead, quality of competition will be at his forefront of desires, he said.

This is a public pronouncement in support of youthful ideals, the hiring of Nelson, and also the investment in Bill Simmons, taken from ESPN. Will Simmons, yes, a boxing fan with a strong base of knowledge in the sweet science, be working in concert with Nelson, influencing programming? Nelson said he is cognizant that the executives at HBO are top tier across the board, and reiterated his stance that he is privileged to be in the mix with them. He first met Simmons at the Canelo Alvarez-Miguel Cotto event in Las Vegas, on Nov. 21 and he called Simmons a “tremendous talent and incredible asset to this network.”

Nelson noted that Simmons is a superior “curator” and said he will be continuing his conversation with the opinionated auteur, also a Massachusetts native.

Finally, this is a new age, where methods of branding, of message dissemination have and are changing. To that end…will we be seeing Gennady Golovkin and Sergey Kovalev on “Game of Thrones?”

Nelson chuckled, again, and said he will stay in his lane, that being a vehicle to help put on compelling boxing matches.

My take: I speak first as a fan, who wants to see the best fighting the best. As an opinionator, I share the optimism publicly and privately shared by media and movers and shakers and piemakers I’ve spoken to. Yes, Nelson is “young,” and I think that is acknowledged by the fact that he can succeed upwards into the President chair that Ken Hershman is exiting, after four years. The bet here is that the Harvard-educated Nelson owns the intellectual fiber and characterological makeup to push back when needed, to stick to a foundation of quality control that will best serve the subscriber base. I think we should be encouraged by the word choice he used, calling subscribers “sophisticated.” That he respects the subscriber and knows that they know what they want and deserve, that can only bode well for his era, which starts now.