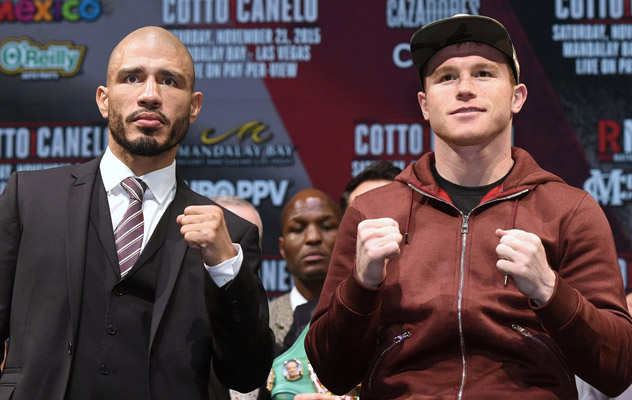 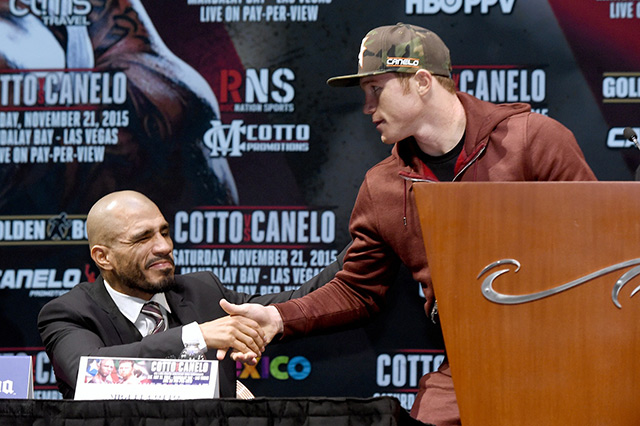 Cotto and Canelo at the final press conference. Photo by Naoki Fukuda

Note: This feature originally appeared in the December 2015 issue of THE RING Magazine

MIGUEL COTTO AND CANELO ALVAREZ HAVE TURNED IN MANY OUTSTANDING PERFORMANCES. HERE ARE TEN THAT HAVE HELPED SHAPE THEIR CAREERS.

Date: Sept. 24, 2005
Site: Boardwalk Hall, Atlantic City
Result: KO 7
The background: Torres was unbeaten but also relatively unknown going into this fight, the fourth defense of Cotto’s WBO junior welterweight title. Cotto put Torres down four times en route to a seventh-round knockout to run his record to 25-0 (with 21 knockouts).
Why it was special: The fact Cotto emerged victorious isn’t what stood out about the fight. Torres, a wicked puncher, put Cotto down once and hurt him at least four times in a fight that seemed to be an upset in the making. Cotto survived, demonstrating the resilience that would help him build a Hall of Fame career.

Date: June 9, 2007
Site: Madison Square Garden, New York City
Result:
TKO 11
The background: Cotto, defending his WBA welterweight title, was facing a quick, slick boxer-puncher who had given Floyd Mayweather Jr. trouble the previous year but had also lost to Carlos Baldomir in the fight before that.
Why it was special: This arguably was the best year of Cotto’s career, as he beat in succession prime versions of Judah and Shane Mosley. Cotto not only outboxed Judah – leading 97-91 on all three cards – but also stopped him to prove he could dominate an ultra-fast, very athletic opponent.

Date: Nov. 10,2007
Site: Madison Square Garden, New York City
Result: UD 12
The background: Mosley had lost some fights by this time but, even at 36, was still considered a stiff test for Cotto. This was Cotto’s third defense of his WBA title, which he would lose to Antonio Margarito two fights later.
Why it was special: The back-and-forth fight was very close and difficult to score but Cotto emerged with a unanimous decision – 116-113, 115-113 and 115-113 – arguably Cotto’s most significant victory until he stopped Sergio Martinez in 2014. Cotto was still unbeaten at this point, through 31 fights.

Date: Dec. 3, 2011
Site: Madison Square Garden, New York City
Result: TKO 9
The background: Cotto waited a long time for this fight. In 2008, Margarito had handed Cotto a vicious beating before stopping him in the 11th round. Later, many speculated (but never proved) that Margarito’s gloves were loaded.
Why it was special: Cotto was able to put bad memories aside and exact revenge in the sweetest of manners, breaking Margarito down before finally stopping him in the ninth round to retain his WBA junior middleweight title. Margarito, who was pummeled by Manny Pacquiao in his previous fight, never fought again.

Date: June 7, 2014
Site: Madison Square Garden, New York City
Result: TKO 10
The background: Remember, many believed that Cotto was finished as an elite fighter when he lost back-to-back fights to Floyd Mayweather Jr. and Austin Trout in 2012. Two fights later, he fought the RING middleweight champ.
Why it was special: Martinez’s body seemed to be falling apart but, still, many believed he had more than enough left to dominate Cotto. He didn’t. Cotto put the Argentine down three times in the first round and never looked back to reestablish himself as a major player in the sport at 33 years old.

Date: May 5, 2012
Site: MGM Grand, Las Vegas
Result: UD 12
The background: Mosley was past his prime by the time he met Alvarez but he was by far the most accomplished fighter Canelo had faced to date, an important test in his still-young career .
Why it was special: Alvarez dominated an overmatched Mosley much as Floyd Mayweather Jr. and Manny Pacquiao had in recent fights, proving to be too fast, too good and too tough for the aging veteran. It was the most convincing evidence yet that he was more than just a product of immense hype.

Date: April 20, 2013
Site: Alamodome, San Antonio
Result: UD 12
The background: The slick, strong Trout was undefeated and coming off a surprisingly dominating decision victory over Cotto. That’s why he was deemed a very real threat to Alvarez, who was coming off a KO of Josesito Lopez.
Why it was special: Alvarez outboxed Trout to win a unanimous decision in a close fight. The performance was particularly meaningful because no one could argue this wasn’t a legitimate test. And he passed.

Date: March 8, 2014
Site: MGM Grand, Las Vegas
Result: TKO 10
The background: Angulo was more tough than talented but he served as an important opponent because of Alvarez’s previous fight, a lopsided, frustrating loss – his first – to Floyd Mayweather Jr. How would that disappointment affect the young fighter’s confidence?
Why it was special: If Alvarez’s psyche was damaged by the Mayweather setback, it certainly didn’t show. He coolly, methodically broke down a rugged fighter in Angulo before ending matters 47 seconds into Round 10. It was as if the Mayweather debacle had never happened. Canelo was back.

Date: July 12, 2014
Site: MGN Grand, Las Vegas
Result: SD 12
The background: Say what you want about Lara, the one-time amateur standout from Cuba – he’s extremely difficult to beat. Only one fighter, Paul Williams, had done so before Lara met Alvarez and that outcome was disputed.
Why it was special: The debate over who deserved the decision rages on but this much seems clear: Alvarez fought on at least even terms with one of best pure boxers in the world in his biggest test aside from Floyd Mayweather Jr. Alvarez won 115-113, 117-111 and 113-115, an important step in his career.

Date: May 9, 2015
Site: Minute Maid Park, Houston
Result: KO 3
The background: Kirkland wasn’t a top-tier opponent going into this fight but he was a beast of the first order, a fighter who tries to maim his opponent with every punch and sometimes does. How would Alvarez stand up to the onslaught?
Why it was special: Kirkland did exactly what he was expected to do, coming out like a madman at the opening bell. Alvarez as calmly as possible withstood the storm – demonstrating his maturity – and waited for his chance. When it came, he pounced. Kirkland went down three times before the third round was over in an absolute thriller.