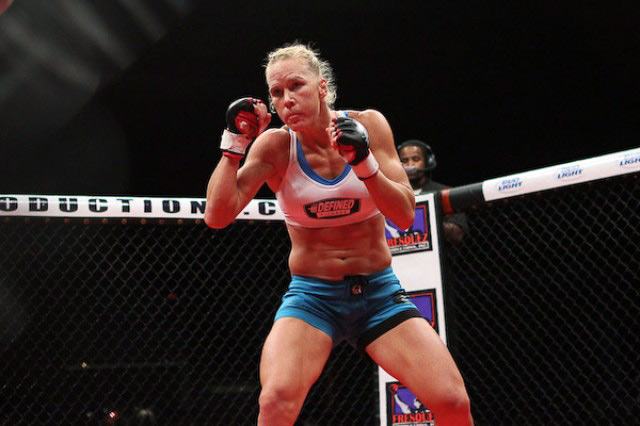 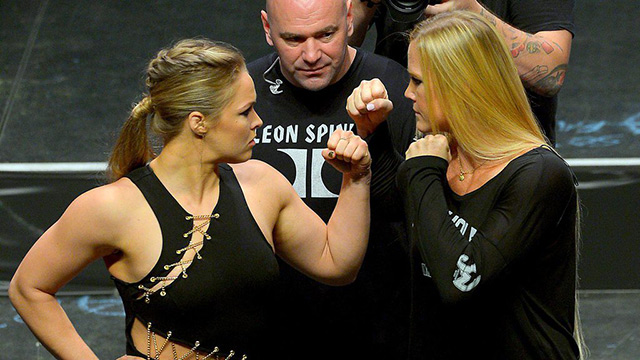 Holly Holm (right) was one of the most accomplished female boxers in history, but will her boxing experience help her at all against fearsome MMA bantamweight champ Ronda Rousey (left)?

Boxers have had a checkered past in the world of mixed martial arts, one that often doesn’t end up well. Of course that’s never stopped sweet scientists from attempting to put their boxing to the test against foes well versed in several combat sports disciplines.

From former NABF cruiserweight and light heavyweight title challenger Art Jimmerson, who fought Royce Gracie with one boxing glove in the first UFC event in 1993 and ended up submitted in a little over two minutes, to future Hall of Famer James Toney, who suffered a similar fate against Randy Couture at UFC 118 in 2010, it’s been a rough go for boxers in the Octagon.

Many in the boxing world believe that former women’s pound-for-pound queen Holly Holm will suffer a similar fate when she challenges Ronda Rousey for the UFC women’s bantamweight championship in the main event of UFC 193 this Saturday (Sunday Australian time) in Melbourne, Australia.

With the bout expected to draw 70,000 fans to Etihad Stadium, it’s the latest in a series of firsts for Albuquerque’s Holm. That’s something you might not have expected for a veteran of 38 pro boxing matches who won multiple world titles in three divisions and who has a place on THE RING’s all-time best list featured in the January issue (ironically, an issue that has Rousey on the cover). But women’s boxing has gotten little, if any, traction in the United States in recent years, and despite Holm’s ability to sell out venues in her native New Mexico and become a legitimate star there, mainstream success eluded her until she put on four-ounce gloves and started competing for the UFC.

“I figured it would blow up a little bit just because there’s been so much anticipation and hype around it already,” Holm said when she signed with the promotion in July of 2014. “But maybe not to the extent that it did. I’ve had Twitter for a year, and I doubled my followers in three hours. (Laughs) I didn’t expect that.”

She probably didn’t expect to have her fight with Rousey announced on Good Morning America either, but that’s par for the course when it comes to anything involving Rousey, an Olympic bronze medalist in judo who has changed the game for female athletes ever since transitioning to mixed martial arts.

The first woman to compete in a UFC event and the promotion’s first and only women’s bantamweight champion, Rousey has transcended her sport and sports as a whole, becoming a crossover star of the highest order. And in the Octagon, the person Sports Illustrated named the most dominant athlete in sports has lived up to that unofficial title, winning all 12 of her bouts by knockout or submission, 11 in the first round. Her last three title defense wins have lasted a combined 64 seconds, drawing comparisons to a prime Mike Tyson.

So is Holm Buster Douglas or Buster Mathis Jr.?

Oddsmakers say the latter, but there are enough question marks to give Holm a decent chance of being the former if all the right pieces fall into place on fight night.

First off, Holm is not like Toney, Jimmerson or most other boxers that attempted to compete in mixed martial arts. For the most part, those who came before “The Preacher’s Daughter” had a simple game plan – “I’m a boxer, I use my hands for a living. One shot and it’s all over.”

Marcus Davis, a UFC veteran who put together a solid 17-1-2 pro boxing career on the New England circuit before moving to MMA had the same idea when he switched sports.

“I know what they think because I did it,” Davis, who was a pro boxer from 1993 to 2000, said before one of his early UFC fights. “But it just blows my mind when I still hear this from other boxers – they’re that ignorant to the fact that they really believe that they can go into this sport and box and succeed. You can’t do it.”

“I will tell every boxer out there right now who thinks that because they watch a mixed martial arts fight and see the guys throwing punches and kicks and stuff, and say ‘if he tried to take me down, I’d catch him with a punch’ or ‘if he tried to kick me I’d step in and smash him with a punch,’ you’re wrong,” he continued. “Because at some point, that fight will end up on the ground. You are gonna be kicked in the leg and taken to the ground and if you think that you’re gonna go in there, one-dimensional as a boxer and succeed in mixed martial arts, you’re gonna have a rude awakening. You’re gonna hit the ground and go into panic mode and the fight’s gonna be over. I don’t care who it is.”

Davis had days like that before dedicating his days to learning the ground game. He ended up becoming a welterweight contender in the UFC. Holm, who retired from boxing in 2013 after defeating Mary McGee, actually began her combat sports life in kickboxing as a teenager, training with the man who still coaches her today, Mike Winkeljohn. Obviously she moved to boxing, but she’s been around MMA since those early days, and while she moved over to her new sport full-time in 2013, she already had three pro MMA fights before making that decision. And when she retired from boxing, you could hear the excitement in her voice about the new chapter in her life, and she doesn’t miss the sweet science.

“I don’t,” she said. “I loved it for all the years I did it, but I really don’t have the desire to do it anymore, which makes me even more happy about my decision to go with MMA. I went to some boxing fights and I really enjoyed watching them, but I just kept thinking ‘I’m so glad that’s not me anymore.’ (Laughs) I did it a long time and I wanted to make sure I did it as long as I really loved it, and that was that. I’m happy where I’m at, and I’ll always have love for boxing, my career, and the people who supported me, but it’s fun to be part of something new, learn something new, and be on a new path. It’s exciting, it’s fun, and it’s what I want to do.”

Since moving to MMA full-time, Holm has won six more fights, upping her record to 9-0 with six knockouts. She’s won twice in the UFC, decisioning Raquel Pennington and Marion Reneau, but her inability to score knockouts in those fights have put up red flags among MMA fans who expected a former boxing champion to be starching foes left and right.

But Holm, 34, was never that kind of fighter. She was a boxer who used her jab and distance well, with straight punches that scored points being her weapon of choice. In MMA, she is still a master of distance, but her knockout blows have been her kicks, and both aspects of her game will serve her well with Rousey if she can implement them.

Yet just like Tyson said “everyone has a plan until they get hit,” and in Rousey’s case, it’s “everyone has a plan until they get grabbed.” If Rousey closes the distance and gets a hold of Holm, what will likely follow is a judo throw to the canvas and an armbar that will force the challenger to tap out. It’s the sequence everyone knows is a possibility at any time, but no one has been able to stop it. Holm won’t likely be the first.

But the Tyson-Douglas scenario can come into play for Holm if she can put doubt in Rousey’s mind immediately – most significantly with a hard kick to the leg, body or head – or if Rousey’s ever increasing love for boxing and the striking game makes her want to test that boxing out against one of the best that ever did it. If this MMA fight becomes a boxing match, then it will be an interesting morning in Melbourne, and Holm will achieve the goal she had in her mind from the moment she put four-ounce gloves on.

“When I first started doing MMA, people asked me what my goal was in this, and my goal is to be the first female that has titles in both MMA and boxing because nobody’s done that,” Holm said. “And it’s totally doable, and that’s my plan.”

Oscar Holm 1A from Golden Boy Digital on Vimeo.