Antoine Douglas and Les Sherrington will meet at crossroads in Vegas 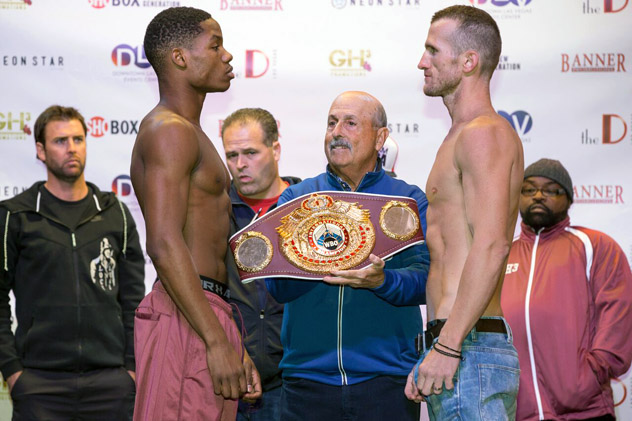 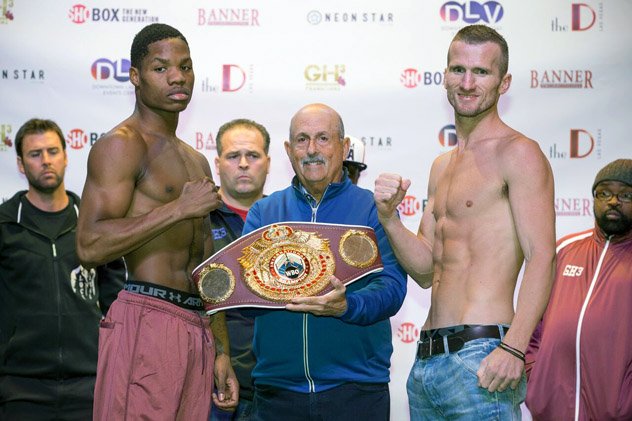 Antoine Douglas (L) and Les Sherrington weigh in for their Nov. 6 bout in Las Vegas. Photo by Esther Lin – Showtime.

It may be a cliche, but the Antoine Douglas-Les Sherrington fight will indeed be a battle between youth versus experience when they square off tonight in Las Vegas.

The 10-round middleweight bout will top a ‘”ShoBox: The New Generation” telecast which will air on Showtime beginning at 10 p.m. ET/ 7 p.m. PT.

Friday night will mark the fifth time Douglas has appeared on a ShoBox card. The 23-year-old has benefited from the exposure of fighting on the popular series over the last two years.

Douglas believes a convincing victory over a veteran fighter like Sherrington could open doors in 2016.

“The way I train, I’m ready for anybody,” said Douglas, who resides in Burke, Virginia. “I respect Sherrington as a fighter. I know he likes to switch. (My) main thing is too stay busy and jab. He likes to come forward, so I don’t want to make it easy for him and just stand in front of him. I’ll try and take advantage of what I have, utilize all my strengths like I do against all my opponents.”

In his last bout, on July 17, Douglas (18-0-1, 12 knockouts) scored an impressive third-round technical knockout over Istvan Szili in Bethlehem, Pennsylvania. The only blemish on his record is a 10-round majority-decision draw against contender Michel Soro from a year earlier.

“This is another big fight for me, a chance to move up in the rankings and then go from there,” said Douglas. “I’m ready for the next step. I’m thinking I can have a monster year in 2016. I will fight anybody. I’m looking forward to getting to the big dance.”

Sherrington (35-7, 19 KOs), of Australia, believes his experience gives him the edge, despite the fact that he is 10 years older than Douglas.

“I definitely feel they’re underestimating me in this fight,” said Sherrington, who has won his last two bouts since losing to Sam Soliman in December. “They think I’m the same fighter that got knocked out in his pro debut and was just 4-3 after seven fights. But I’m not that fighter at all. I’ve gone through hard times, had different promoters, trainers. (I have) learned a lot of lessons and had my fair share of setbacks and injuries in my career.

Opening the Showtime telecast will be an eight-round lightweight bout between O’Shanique Foster (8-0, 5 KOs) and Samuel Teah (6-1, 2 KOs).