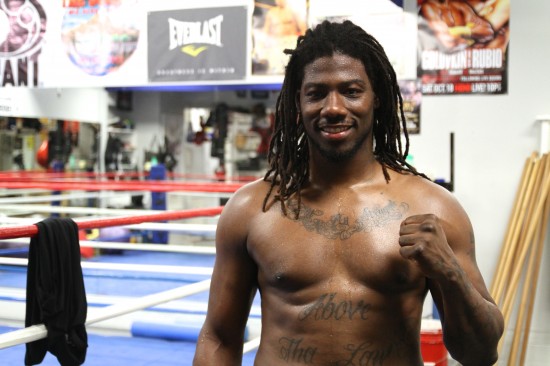 Prince Charles Martin can fight a bit and has a personality to boot. He’s edged his way up the rankings and will get an opportunity to perform on a bit bigger platform, against prospect Dominic Breazeale, on Dec. 12, in San Antonio.

That event, at the AT&T center, features Omar Figueroa vs. Antonio DeMarco, Artur Szpilka vs. Amir Mansour and Chris Arreola vs. Travis Kauffman. Among the heavies, you figure auditions are underway for an eventual fight versus WBC champ Deontay Wilder.

Martin (22-0-1, with 20 KOs; WBO No. 2, behind Tyson Fury and RING champ Wlad Klitschko, who also holds the WBO strap), based in St. Louis, is under the Al Haymon umbrella. He will look to elbow fellow Haymonite Breazeale out of the way in Texas and show all that he merits a title crack.

Veteran adviser Mike Borao, who has skillfully guided Martin, and had him aligned with promoter King Sports, now out of business, reps the 29-year-old. “I see Prince Charles Martin separating himself from all other heavyweight contenders in this upcoming PBC bout versus Breazeale,” Borao told me.

PCM beat Vicente Sandez (15-4) in September (TKO3) and, before that, Tom Dallas (TKO1) in support of Wladimir Klitschko-Bryant Jennings. I think Breazeale is likely a notch better than anyone he’s met as a pro, so this should be a bit of a coin-flip tangle. Martin is a lefty, has got some pop, maybe could tighten up the D, drops his hands some and commits 24/7 to training and nutrition. If and when he gets to that mountaintop against B, B-plus…and maybe A-guys, the jury is deliberating on him. We will know more Dec. 12.

Michael Woods once used an Al Haymon umbrella. Turned out the sucker was leaky. Seems Al digs a good joke.