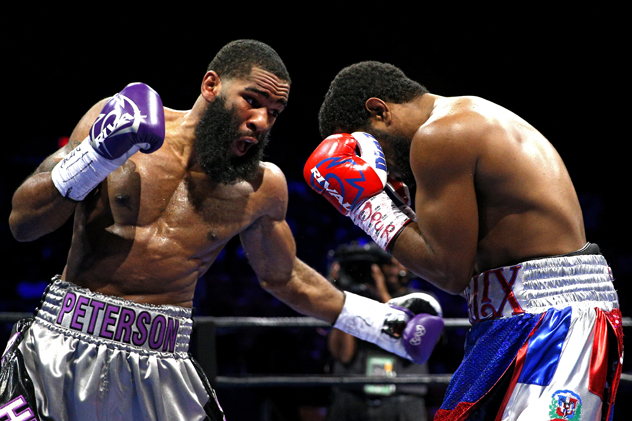 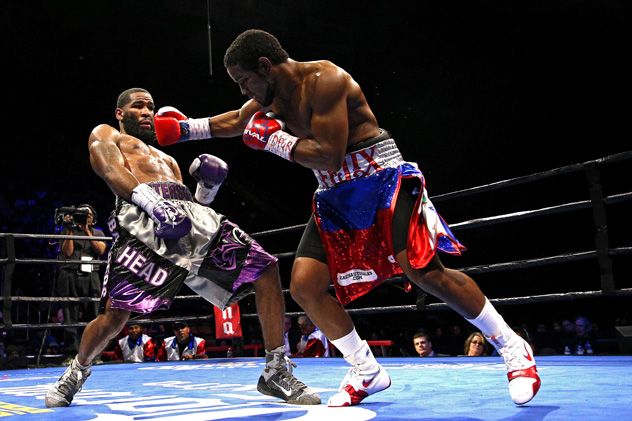 On Saturday, Oct. 17, Lamont Peterson fought Felix Diaz in the main event of a Premier Boxing Champions card televised by NBC. The fight was closely contested. Peterson was widely regarded as the “house fighter.”

Jake Donovan summed up the proceedings as follows for BoxingScene.com: “Lamont Peterson managed a disputed majority decision win over previously unbeaten Felix Diaz in their welterweight headliner Saturday afternoon in Fairfax, Virginia. An even score of 114-114 was overruled by cards of 117-111 and 116-112 in favor of Peterson, scores that reeked of hometown favoritism for the former ex-champion fighting less than 45 minutes from his Washington D.C. backyard.”

The NBC commentating team that called the fight openly questioned how a judge could arrive at a 117-111 scorecard.

The judge with the 117-111 scorecard in favor of Peterson was Dorothea Perry. What makes this particularly problematic is that Ms. Perry is also an inspector for the New York State Athletic Commission.

Inspectors are the eyes and ears of the governing state athletic commission in the dressing room and at ringside on fight night. The job involves direct contact with fighters and the members of each fighter’s team.

Inspectors make mistakes from time to time. But their impartiality is rarely, if ever, questioned. The assumption is that they are scrupulously evenhanded. They don’t make judgments. They simply follow the rules, observe what’s going on, and report any possible irregularity to the chief inspector and commissioners.

By contrast, the impartiality of judges is often questioned. Indeed, in many states, there’s a process in place by which a fighter’s camp can object to the assignment of a particular judge.

There’s no normal procedure in place to object to the assignment of a given inspector to a fighter’s dressing room. In many jurisdictions, inspectors aren’t even matched with fighters until an hour or two before the fight.

Also, inspectors are paid a set fee by the governing state athletic commission. Technically, in most jurisdictions, judges are also paid by the commission. But in reality, the money to pay judges comes from the promoter and the amount that judges are paid varies widely depending on the magnitude of the fight.

Several years ago, trainer and TV commentator Teddy Atlas told Robert Ecksel of Boxing.com, “You go into a certain place the night before a big fight. You go into a restaurant. The head of the organization and all the officials, all the judges, all the referees; they’re all having a five-thousand-dollar dinner. Guess who’s paying for it? The promoter. Would the Steinbrenners have a deal like that with the head of the umpiring organization before the World Series? They couldn’t because there’s someone there to make sure that doesn’t happen. But it happens in my sport. And what else do you think happens besides picking up the tab and having wine and lobster and caviar and steak and all the best of everything? You don’t think those judges know who has to win? And you don’t think some of those guys come over and say, ‘Can I get my room upgraded to a suite?’ ‘Yeah, sure. Sure, Mr. Referee. Sure, Mr. Judge. Yes, okay, no problem.’ ‘Oh, by the way, can I also get my room extended for an extra two days? My girlfriend is coming in and she wants to stay for an extra two days.’ ‘Yeah, no problem.’ ‘Oh, by the way, my wife decided she’s going to fly in. Can I get two plane tickets instead of one?’ ‘Sure.’ You don’t think that’s happening? I’ll think for you. It is. That is corruption. I don’t even think I’m going to call them bad decisions anymore. I think I’m just going to call them what they are: fixed fights. I’m going to say ‘fixed fight, fixed fight,’ because that’s what they are.”

What Atlas neglected to mention is that judges have been paid as much as $20,000 to judge a single fight.

That brings us to the matter of Dorothea Perry.

According to Boxrec.com, Ms. Perry has judged 28 professional fights. The first 22 were in Delaware. The last six have been in Virginia.

Peterson-Diaz was Ms. Perry’s first high-profile judging assignment. She was also a judge in the other featured TV fight that afternoon: Prichard Colon vs. Terrel Williams. The scoring of that fight has been largely ignored in the aftermath of the tragic injury suffered by Colon. But it’s worth noting that, like Peterson, Colon was perceived as the “house fighter.” When the bout was stopped at the end of nine rounds, the other two judges had Williams ahead. Ms. Perry’s scorecard favored Colon.

It’s not necessary for purposes of this discussion to decide that Ms. Perry’s scorecard in Peterson-Diaz was off base (although that seems to have been the case). Nor should one impute any inappropriate intent. The issue here is whether or not an inspector should judge fights.

The New York State Athletic Commission (which oversees Ms. Perry’s performance as an inspector) has a conflicts of interest policy that prohibits its inspectors from judging fights in New York. Indeed, if an NYSAC inspector wants to be a ring judge in New York, the inspector must resign his or her position and wait two years before applying to become a judge.

Some NYSAC inspectors have followed this ethical code to the letter. Former boxer Tyrone Jackson gave up his position as an inspector and is now waiting out the two-year period. Similarly, Ernie Rodriguez left inspecting and is hoping to referee professional fights in the future.

Ms. Perry is exploiting what appears to be a loophole in the NYSAC policy. While continuing to work as a New York State Athletic Commission inspector, she is judging fights out of state.

When Melvina Lathan was first named a commissioner in New York, she had hoped to continue judging in other jurisdictions. She was told by the powers that be in New York that she could not.

Inspectors in New York aren’t allowed to work directly for sanctioning organizations. An NYSAC inspector was recently dismissed because he accepted a T-shirt from a fighter in the dressing room on fight night.

A commission inspector shouldn’t be allowed to judge fights.

Giving an inspector the perks of a judging assignment (including the possibility of a large paycheck and travel to a desirable out-of-town location) has the potential to influence that inspector’s performance in the dressing room. An inspector might be reluctant to stand up to a fighter’s camp and might accede to their wishes in the hope of getting a lucrative future judging assignment. An inspector with visions of a judge’s seat at a big fight is less likely to tell a fighter, “We’ve already tested your urine. You can’t drink that vitamin shake.”

This conflict of interest is the same whether the inspector hopes to judge fights in New York or elsewhere.

And it’s an inadequate response for the New York State Athletic Commission to say, “We won’t assign Ms. Perry to work fights where an advisor, manager, or promoter from a fight she judged out of state is involved.” In boxing today, most promoters, managers, networks, and fighters are at least tangentially connected by common interest or antipathy.

Greg Sirb is executive director of the Pennsylvania State Athletic Commission and one of the most knowledgeable boxing regulators in the country. Recently, Sirb was asked about the propriety of an inspector in one jurisdiction serving as a ring judge in another.

“To me, it’s a no brainer,” Sirb answered. “There’s no way it should be allowed. It’s a conflict of interest, plain and simple. Suppose a fighter or manager or promoter feels that a bad decision has gone against them. And the next month, they’re stuck with the same inspector. Or an inspector does, or doesn’t, order a fighter to rewrap in the dressing room. And sometime in the future, that inspector gets a high-profile judging assignment where the same promoter is involved. I don’t care how capable or honest the inspector is. It’s just plain wrong.”

What doesn’t the New York State Athletic Commission understand about that?

If Dorothea Perry wants to continue working as a ring judge, she should resign as an NYSAC inspector now and work as a judge in Virginia, Delaware, and any other jurisdiction that licenses her services. Then, after two years, she can apply for a judge’s license in New York, and the NYSAC can decide if her judging meets its standards.

Meanwhile, the New York State Athletic Commission should rethink its policy of allowing its inspectors to judge fights. As things stand now, the commission is looking for trouble.

Thomas Hauser can be reached by email at [email protected] His most recent book – “A Hurting Sport: An Inside Look at Another Year in Boxing” – will be published in November by the University of Arkansas Press.