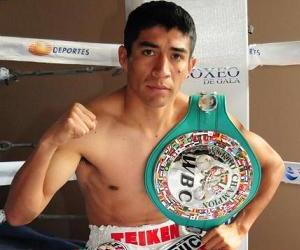 Junior flyweight Ganigan Lopez fell short of his goal of winning a major title in his last fight. That won’t deter him from continuing down the path toward championship gold.

Lopez will face late-sub Juan Luis Lopez tonight at the Auditorio Blackberry in Mexico City, DF, Mexico. The 10-round bout will headline an All Star Boxing card and will be broadcast on Telemundo, beginning at 11:35 p.m. ET/ PT.

It will be the final ‘Boxeo Telemundo’ broadcast of 2015.

Lopez was unsuccessful in his first attempt at winning a world title in his last bout on July 4, losing a unanimous decision to WBC junior flyweight beltholder Pedro Guevara in Mazatlan, Sinaloa, Mexico.

Lopez (25-6, 16 knockouts), who resides in Mexico’s capital city, had won five consecutive bouts prior to the Guevara fight.

The 33-year-old southpaw has faced Denver Cuello, Omar Soto and Adrian Hernandez in a pro career that began over 12 years ago.

Juan Luis Lopez (13-3, 7 KOs) has mostly fought as a strawweight throughout most of his pro career.

He has not fought since May 27 of last year, when he stopped overmatched German Garao in the fourth round in Orizaba, Veracruz, Mexico.

He has won his last two bouts, against inferior opposition, after going losing three of his previous four bouts.

Junior welterweight Luis Vidales will fight Martin Islas in an eight-round matchup and flyweights Daniel Garcia and Irvin Ordaz will square off in a six-round bout.