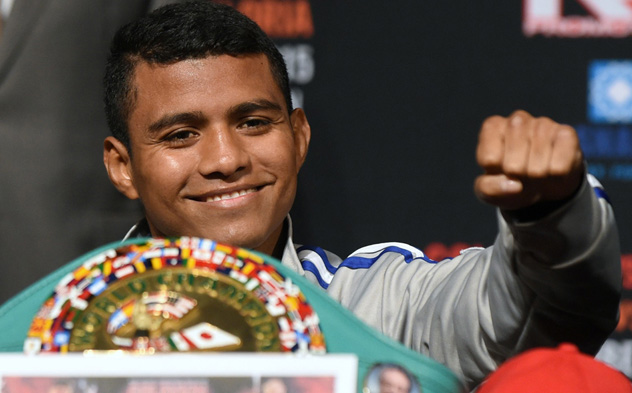 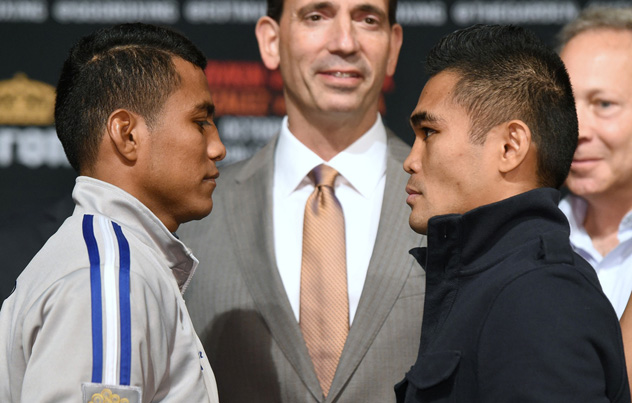 Keeping track of the rise of a flyweight boxer through the rankings is a job worthy of the truest boxing fan. Many of these fine practitioners of the Sweet Science tread the rings of the world for years before being noticed (if ever) by the mainstream sports fan.

For this reason alone, the ascent of a “smaller weight” fighter from a small Central American country to the very top of the pound-for-pound rankings should be viewed as one of modern-day boxing’s biggest feats.

Undeniably, it is much easier for a former Olympian hailing from a “big boxing market” to find a way to the top of those lists but the same path is proportionally harder for a diminutive, soft-spoken warrior from Nicaragua, regardless of the amount of talent he may possess.

If this holds true, then we are then on the verge of a historic occurrence on Saturday when unbeaten RING flyweight champion Roman “Chocolatito” Gonzalez (43-0, 37 knockouts) makes his official debut as the world’s reigning best pound-for-pound fighter against former two-division titlist Brian “Hawaiian Punch” Viloria (36-4, 22 KO).

After the recent retirement of erstwhile pound-for-pound king Floyd Mayweather Jr., most boxing connoisseurs were unanimous in their anointing of Gonzalez as the heir to the throne. And barring an upset, Gonzalez will be validating his claim to greatness in a bout in which he will only need to be his usual self and produce an average performance to achieve his goal under the bright lights of New York’s Madison Square Garden. That’s how high he has set the bar for himself with the way in which he has handled his career so far.

Predictably enough, Gonzalez’s personal story is filled with the usual situations and characters that are common to many of his peers. But his unique relationship with his mentor, and father figure, the late great three-division titlist Alexis Arguello, has defined his career and shaped his natural talent into the polished diamond he is now.

Chapter One: A kid in Managua

In Barrio La Esperanza there is no thru-driving allowed. It’s either in or out.

Gonzalez’s native suburb of Managua looks like a maze of dead-end streets in which crime, poverty and the occasional flooding feel right at home. The rising waters and the lack of proper sanitation services are as deadly a cocktail as any other and they usually lead to the unwelcomed presence of bugs and rodents.

It was against these emissaries of disease and dirt that the Gonzalez family picked one of their earliest and tougher fights.

“I come from a poor family,” said Gonzalez in a recent interview from his training camp in Costa Rica. “It has been tough getting ahead but we’ve done things right.” 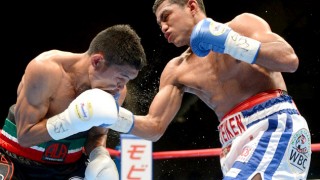 The lack of a steady stream of income was the consequence of Gonzalez’s father having an uneven employment history which, back then, was heavily dependent on door-to-door sales. His best-selling products were cleaning supplies, disinfectants and different types of poisons for insects and rodents that laid a permanent siege to this neighborhood of roughly one thousand souls. And young Roman contributed to the economy of the household by acting occasionally as an associate salesperson in the family business.

But as it turns out, his dad’s career advice didn’t end when they returned home after a hard day’s work.

“My dad taught me my first steps in boxing when I was younger,” said Gonzalez. “There was a guava tree in the backyard and, back then, we didn’t have any money to buy gloves or anything like that. So I took a milk bag and filled it with sand, and I hung it from the guava tree. For gloves, I used rubber gloves like the ones used by electricians.”

Soon enough, Roman was picking up where his father (and his father before him) had left off, embarking in a career as a fighter that would lead to him meeting their mutual idol in a life-changing encounter.

“I used to fight as an amateur in the neighborhood, and in the streets, and when, I realized I liked boxing, I was lucky to meet Alexis Arguello when he opened a gym in San Judas,” said Gonzalez, underlining the miraculous happenstance of having Nicaragua’s biggest boxing icon opening a training facility within walking distance of his home. “That’s where I found the talent that I had in me and, thank God, everything came well after that.”

Arguello took him under his wing immediately, providing guidance and advice – as well as the nom de guerre that would accompany him for the rest of his life.

“My father’s fighting name was ‘Chocolate,’ said Gonzalez, without having to point at his dark brown complexion to provide an extra measure of justification as to the origin of the nickname. “He used to fight in his younger years and traveled to Cuba a lot. When we went to the gym for the first time to see Alexis Arguello, there were many kids around. Alexis said, ‘So you’re Chocolate’s son? Then you must be ‘Chocolatito.’ It stuck after that.”

Some other things stuck out in young Chocolatito in the eyes of the legendary multi-division champion and it wasn’t long before Roman was the gym’s superstar in the making.

“When I realized I had some talent, Alexis placed a lot of attention on me. He took me under his wing during my amateur career and we fought every 15 days. I was a champion in 2004 in San Jose, Costa Rica, and a two-time national champion, one in Chontales and another one in Managua.”

It wouldn’t take long for the rest of the world to realize that same talent and dedication to the sport. And by then, the road for Roman Alberto Gonzalez Luna’s transformation into Chocolatito was well on its way.

Just as his mentor had dreamed of fistic success while growing up in war-torn Managua, Roman Gonzalez also dreamed of fighting his way toward matching the glory of his illustrious compatriot by becoming a three-division boxing champion.

In time, fate put him on a path to fulfilling and even surpassing that lofty goal.

After turning professional in 2005, Gonzalez marched on to win the WBA strawweight title three years later. He made three successful defenses before moving up to junior flyweight, where he annexed a WBA belt in that division. Five defenses followed before he moved north yet again to equal Arguello’s feat of winning titles in three weight classes when he stopped Akira Yaegashi in nine rounds to win the RING and WBC titles.

“Alexis trained me during my amateur days and I became Central American champion,” said Gonzalez. “I am very happy for that because I learned a lot of great things from him. He gave me a lot of advice and was like my father. I would love to have him here now and feel proud together for everything we’ve accomplished.” 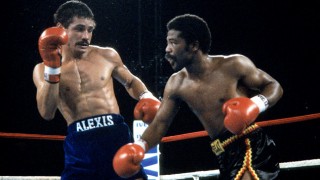 But beyond the similarities with Arguello’s story, the silent rise of one of boxing’s most gifted practitioners has produced something even more significant than an equal number of titles for Gonzalez. His recent anointing as the best pound-for pound fighter in the world after he practically breezed through three divisions has led many experts to believe that he is barely scratching the surface of his talent in a career that could take him as far as the bantamweight division. And the depth of those three divisions only enhances his credentials as one of boxing’s best kept secrets for the casual fan.

And yet, as good as he has demonstrated to be and as profitable as he is about to become, thanks to his contract with HBO, it’s possible to imagine that his future may not rest entirely in his own hands.

“There are a lot of great opponents but not all of them want to face me,” said Gonzalez, worried about the fact that most of the elite opponents in the lighter divisions have already been dissected under his surgical knife. “The toughest fight I could have after this one could be a rematch with Juan Francisco Estrada, a very tough guy who gave me a difficult fight. But Estrada decided that there were other opponents for him. There are other guys out there but no one wants to fight me. They want to go in other directions. Today, more than ever, it is difficult to find opponents at this level. There are a lot of guys out there who don’t want to lose. They want to have an easy career, facing soft opponents just to be able to say they were a champion.”

In other words, they want to take the exact opposite road that Gonzalez has taken so far: tough fights in his opponent’s backyards against the odds.

“Yutaka Niida was champion for a long time before I stopped him in four rounds,” remembers Gonzalez about his first title bout, in which he demolished the Japanese minimumweight titlist in murderous fashion. “[WBA flyweight champ Juan Carlos] Reveco didn’t want to fight me. We were going to unify titles but he moved up in weight to 112. And then I fought [Francisco] Rosas and stopped him. After that, I stopped Yaegashi in nine rounds. I also defeated Estrada in 108 and now he is a champion too. We all know who he is.”

The “hard road” taken by Gonzalez has been partly a consequence of his management deal with Japanese promotional outfit Teiken, which has led him to defend his belts numerous times in the land of the rising sun.

Throughout his long and winding road to the top, however, Gonzalez never fails to acknowledge the presence of the lanky former champ that used to repeat, to everyone who would hear him, that “This little guy will become a world champion one day and he’ll be even better than me.”

“I have a lot of memories of Alexis Arguello, the moments we spent together, the combinations he taught me and especially how to train like a real champion,” said Gonzalez. “And that has kept me focused through the years. Some people say I am better than Alexis but even if I win a fourth or fifth title, I will never be better. Alexis will remain as the No. 1 fighter in the world to me. He was the person who taught me his qualities, just like my dad did, and taught me with his experience. He gave me a lot of advice on how to train every day as a champion and that is what has kept me at the top for so long.”

And after Arguello’s untimely demise by suicide in 2009, his presence in Gonzalez’s life would remain in his heart and mind in ways that transcend boxing to permeate his patriotic conscience and his spiritual identity.