Sean Monaghan: From mean to meaner 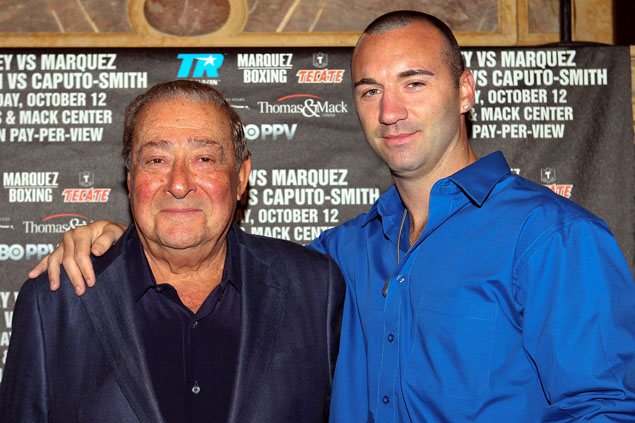 He knows he’s in a tad tougher, maybe, than in one or two of his last bouts. Thus Seanie Monaghan has been digging down in the gym to an extra degree. So he expects to have even better-than-before stamina when he gloves up versus Chicagoan Donovan George in Brooklyn, at the Aviator Sports Complex, and on truTV (1o p.m. ET/PT start), on Friday night.

Apart from that, the 34-year-old Long Beach, Long Island resident told me he’s also been honing a mean streak into a “meaner” streak because he knows that George (25-4-2, 22 knockouts) is no cutie.

He’s seen tape, knows the kid will wing it, won’t run. Some rumbling is going to go down in BK, so Seanie wanted an extra edge.

“I’m extra nasty and sharp, mentally,” he told me Thursday.

It doesn’t hurt that, because the fight is local, everyone and their brother and their cousin is poking him for tix. “Yeah, it’s like they don’t know how to track them down,” he cracked.

Today, the 25-0 (16 KOs) Top Rank Promotions boxer was meeting Yahoo! Sports for a chat, then, at 12 noon, it was a fighter meeting with tru, then weigh in…Lots of stuff to take care of, apart from staying right mentally and daydreaming a positive result Friday.

“Nah, it’s been nice, doing all this stuff in my hometown,” he continued. “I don’t have to go to Manhattan; it’s been real easy for me. But yeah, he’s a really tough guy..and I got a lotta sh*t going on.”

When the fight came his way, Monaghan snapped at it. George has been an ESPN staple, so Seanie’s done extra mileage in roadwork because even more eyes are going to be on him than in recent bouts, maybe. “Also, this is the first fight in a long time that many people don’t think I’ll win,” he stated.

George is coming up in weight, being that Monaghan is a true-blue 175, so how does a super middle handle this jump? “He can punch but I got to be the bigger man…His chin has failed him at 160 [Caleb Truax stopped him three fights ago], so I do anticipate that I will fight hard, go back to my corner, get water, do it again. His chin may not hold up. His best chance is for me to not do what I have to do. He also hasn’t fought in a long time [14 months]…It’s a very basic fight for me,” Monaghan said, before fielding another call from a ticket hunter/old friend. “Nothing too tricky, he’s a pretty good puncher; that’s it.”

Woodsy’s a pretty good puncher too…punching those keys when laying down da tweets.