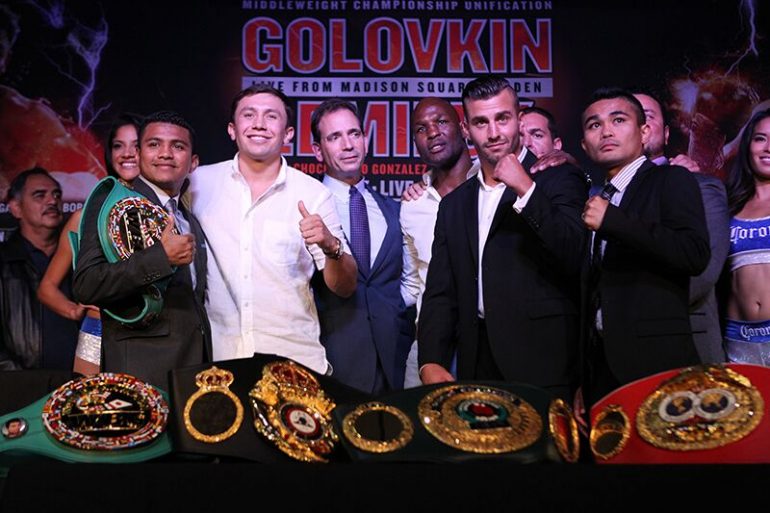 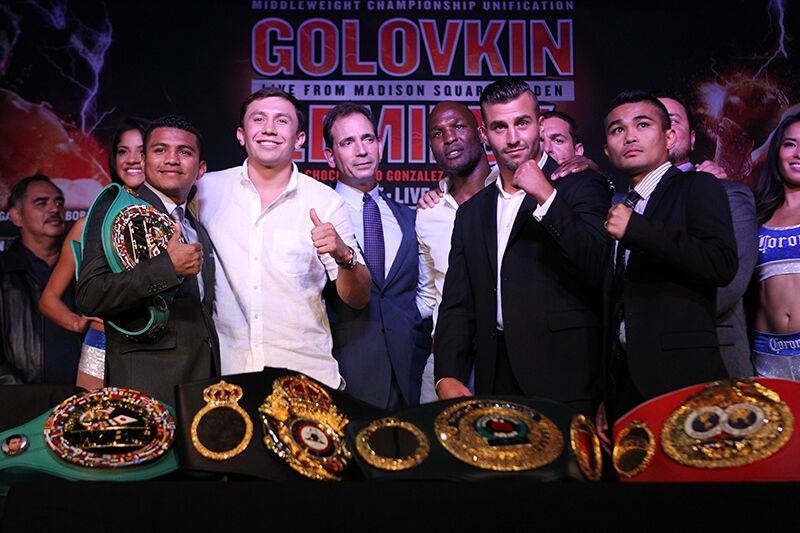 This, gentlemen and ladies, is the start of a new era.

Unofficially, the post Floyd Mayweather Jr.-era, in this supposed red-light district of sports, starts Saturday night. Really, it starts now, as we parse the participants in this derby and sift through assets and deficits and decide what characteristics we want in our leader.

WBA middleweight boss Gennady Golovkin and a man tasked with being the lead foil in the chief support bout to a pay-per-view production, Roman Gonzalez (former two-division beltholder Brian Viloria, 36-4 with 22 knockouts, is the other half of this tandem), and the man tasked with facing Golovkin owns a chin and synaptic package that can be short-circuited, IBF titlist Canadian David Lemieux, all have a common bond.

None of them traffic in the sport and offer reasons for professional motivations previously put forth by Mayweather, who walked away from his throne of supremacy on May 12, following a tepidly embraced adios “effort” against over-matched Andre Berto.

The 33-year-old Golovkin, sporting a 33-0 (30 KOs) mark, says he exists because he “respects old school, just fight, not dancing, not business…I like fight, not game.”

Imperfect English but perfectly comprehensible and laudatory. He’s not trying to re-invent a wheel, be a game-changer in the way Mayweather believes he successfully pulled off. Floyd used a risk-averse style to admittedly masterfully convince masses of fight fans to tune in to his bouts and pad his accounts. In a sport in which concussive power is most often most rewarded, he relied on a divisive personality to convince a majority of those tuning in to watch to see if someone, finally, would shut his trap.

Golovkin gives the people what they want, no apologies, no false-hyping, hints and promises from backers and promoters that THIS TIME, a knockout will be forthcoming. No false advertising or PR efforts to convince us of his humanity needed for “3G”; he is what he is, is what he says he is, is doing what he does for personal pride, because it’s what his heart and soul desires. It’s a welcome change to this top layer of the sport. No division, no factions battling for ideological triumph. Everyone can get behind a good dude, who gives fans their money’s worth each and every time out.

And Lemieux (34-2 with 31 KOs)…odds are he will not be the one to render Golovkin more mortal. His power is real good; he’s improved his mind and body and he’s not probably the same lad who lost in back-to-back tries in 2011. That aside…nobody can take issue with why he does what he does, risking life and limb for our entertainment.

“The money’s not my interest in boxing; it’s the respect and the legacy I want to create and the history I want to make,” the 26-year-old model-handsome pugilist says.

Uncomplicated…a throwback…admirable in that he’s not driven by wealth accumulation.

Same ideas coming from the mind and heart of the fighting pride of Nicaragua, a “little” guy with an XL skill-set and ability to be a positive catalyst to masses of people yearning for a vehicle to lift them up…

RING flyweight champion “Chocolatito” Gonzalez (43-0 with 37 Kos; age 28), nicknamed by the late Nicaraguan legend Alexis Arguello, told me why he risks his health to glove up. I box, he said, “because I come from a very humble background and being able to help my family is definitely a motivation for boxing. I box because I love it, love what I do and to be able to represent Nicaragua, that’s a great motivation for me. And to leave a legacy…We all know we fight for money but, at the same time…it’s what God has given to me and I feel happy.”

I don’t hide my admiration for these three men, and the reasons they hold dear for choosing this risky vocation. They, in fact, are role models for all of us, win, lose, or draw.

Sometimes parked on a Brooklyn brownstone stoop, always in a New York groove, Woodsy’s never short a tweet when he’s on the boxing beat.