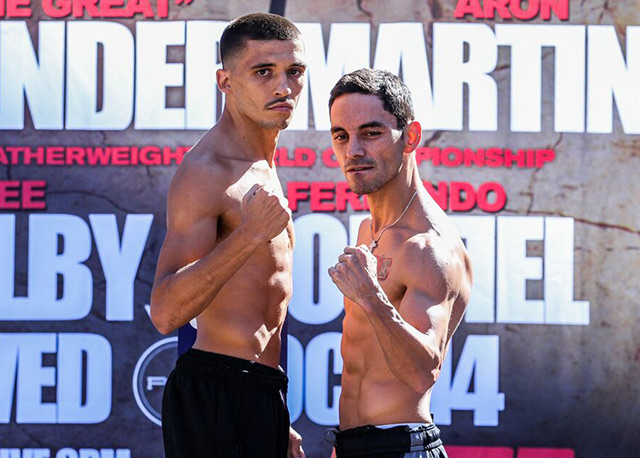 GLENDALE, Arizona – Lee Selby’s pursuit of a world-class profile has taken him to a place he’s never been and into an Arizona ring against a three-time world champion who is close to home.

“It’s a gamble,” said Selby (21-1, 8 KOs), a Wales featherweight who in his first U.S. appearance faces respected Mexican Fernando Montiel in an ESPN-televised title fight on a Premier Boxing Champions card (6pm PT/9 pm ET) at Gila River Arena. “But it’s what I need to do. I need this kind of fight. I need to build up my profile, especially in America.”

The gamble rests in what Montiel (54-4-2, 39 KOs) might do to that profile. The 36-year-old Mexican, a proficient technician, has credentials that say he’s capable of baldy bruising it. Montiel’s long resume includes world titles at bantamweight, super-flyweight and flyweight.

There’s not much that Montiel hasn’t accomplished. In the U.S., however, he is mostly known for what has rarely happened in a career that is nearly two decades old. He got beat, knocked out within two rounds, by Nonito Donaire in February 2011 in Las Vegas. It was a bout that did a lot for Donaire’s profile. Almost overnight, it turned Donaire into a star, a pound-for-pound contender.

It’s no coincidence perhaps that Selby will attempt to do the same in defense of the IBF title he won in a technical decision over Evgeny Gradovich last May in London. Above all, Selby, dubbed The Barry Boy Assassin, hopes for a performance that makes him worthy of a shot at Leo Santa Cruz, the best featherweight in Al Haymon’s deep pool of talent at 126 pounds.

Safe to say, Montiel has his own ideas.

“I feel strong and I feel like I’m at home,” Montiel said before a bout in a boxing market populated by Mexican and Mexican-American fans. “Those things and my experience give me a lot of confidence.”

His experience runs in his family. Boxing is a trade, almost a mom-and-pop business. When Montiel took off his shirt and stepped onto the scale Tuesday, you could see a tattoo of red boxing gloves on the left of his chest. Within the gloves, there was a baby, yet to be born. Montiel’s wife is pregnant.

“I got the tattoo almost nine months ago,” Montiel said.

If you take a closer look at the tattoo, you can see that the baby’s hands are already taped. A Montiel is always ready to fight, perhaps now more than ever.