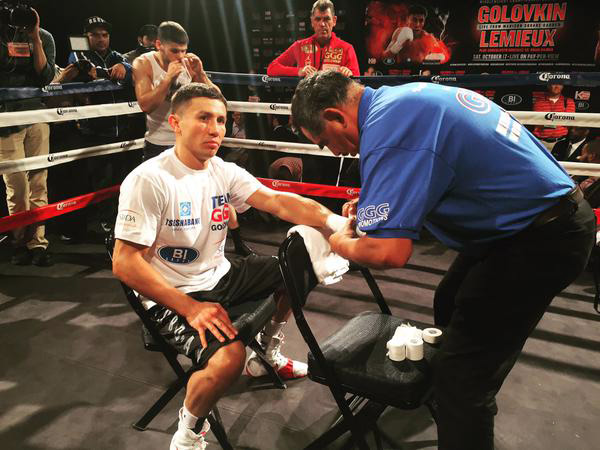 NEW YORK CITY – Gennady Golovkin is human after all, susceptible to illness and other sickly conditions.

The normally accessible knockout artist was quickly whisked out of Madison Square Garden’s Theater without speaking to the media on Tuesday as he was scheduled to do after he had just worked out for them.

Was Golovkin snubbing reporters who had waited hours to speak to him ahead of his middleweight unification fight with David Lemieux Saturday on HBO pay-per-view?

Was Golovkin exposing himself as the opposite of his gracious, humble out-of-the-ring persona?

His trainer, Abel Sanchez urged him to leave the chilly room as a precautionary measure to avoid getting sick like he did before his fight with Gabe Rosado in 2013 at the Garden.

“The last time we were in a significant fight here at the Garden, besides (Curtis) Stevens, he caught a cold against Rosado,” Sanchez said. “It’s a little drafty in here and what I said to his manager in the corner is, ‘Let’s just do minimum stuff and then get him out of here because I really don’t want that to happen again.’ It’s cool in here.”

In an interview with HBO’s Kieran Mulvaney shortly after his workout for his fight at the Garden, Golovkin called Lemieux “the biggest test for me,” adding of his opponent, “He’s the IBF champ. It’s big situation, unification, pay-per-view. Right now it’s a very interesting situation to be in in the middleweight division. I think we have three or four fighters and it’s very important who is No. 1, like Oscar (De La Hoya) long time ago.”

At that point, Golovkin was surrounded by his entourage and escorted out of the Garden, leaving a few reporters irked until it was explained to them the reasoning behind the move.

Sanchez was having flashbacks to the Rosado fight on Tuesday, a bout that ended with Golovkin stopping him in seven rounds.

Recalling that situation, he said he called former New York State Athletic Commission chairperson Melvina Lathan just days before the fight to say the match was off because of Golovkin’s condition that had him bedridden.

“I hadn’t told HBO but I told Melvina,” Sanchez said on Tuesday. “And I told her to keep it under wraps and we would go day by day but as of Thursday night that fight was off. He’s great right now. That’s why I got him out of here.”

Sanchez said it was his decision to have Golovkin leave the workout rather than speak to the media.

“Are you kidding me? He’d rather stay and sit and talk to you guys,” Sanchez said. “I’m going to get blamed if something goes wrong so I don’t want to get blamed.”

SANCHEZ: LEMIEUX CAN HIT BUT ISN’T AS DANGEROUS AS OTHERS

Abel Sanchez doesn’t look like a chronic trash talker, with his distinguished looks and agreeable persona.

But the veteran trainer is quick with a put-down and on Tuesday, following media workouts, he said that former Gennady Golovkin-victim Curtis Stevens was a more dangerous foil than David Lemieux, who faces Golovkin on Saturday on HBO Pay-Per-View in a middleweight unification fight at Madison Square Garden.

Sanchez said that Stevens’ status as a fearsome puncher was more pronounced then Lemieux, even though the Canadian has 31 knockouts in his 34 wins.

“I would say Cutis, who was as dangerous if not more (than Lemieux) because of his reputation- I think you look at him a little bit different,” Sanchez said. “The Chin-Checkers, they were beating everybody up and as a coach I look at what guys have done in the past. David is a force but I think he’s going to be really surprised when he gets checked the first time.”

Surprisingly, Sanchez listed Peter (Kid Chocolate) Quillin as the only middleweight today who would pose a serious challenge to Golovkin’s reign.

“I just think that Peter has a style that’s going to give Golovkin (problems) like I thought (Carl) Froch was going to give him some issues,” Sanchez said. “But that’s what we want. We want him pushed. I want to know, too.

As a result, Sanchez is picking Quillin to stop Danny Jacobs between the fourth and seventh rounds when they face off Dec. 5 at Barclays Center in Brooklyn.

“I think Danny against (Sergio) Mora showed that he’s not capable of taking not even a decent shot so if Peter hits him it may be over,” Sanchez said.

Asked if he believes Quillin poses more of a challenge to Golovkin than either Miguel Cotto or Saul (Canelo) Alvarez, who meet Nov. 21 on HBO pay-per-view- Sanchez seemed to be making light of the fact that Cotto-Alvarez is being waged at a catch-weight of 155 pounds even though it’s for Cotto’s WBC middleweight title.

“I said 160, those guys are 154-pounders right now,” Sanchez said. “Canelo is probably – if he moves up to middleweight – would give us a very good fight.”

Thus, Sanchez is predicting a win for Canelo over Cotto because of his youth and strength.

“I think Cotto has had a great career, a Hall of Fame career, but he’s at the end of it,” Sanchez said.