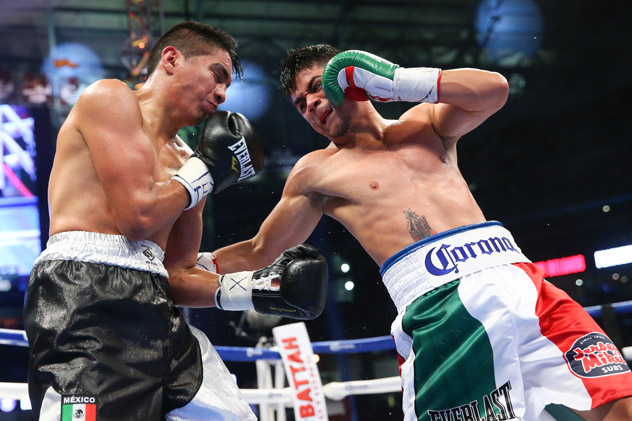 Two of Golden Boy Promotions’ top young fighters will square off in separate bouts on Oct. 23.

Opening the broadcast will be a 10-round welterweight bout between unbeaten Frankie Gomez and Jorge Silva.

Diaz (17-0, 10 KOs) has developed into a solid prospect since making his pro debut. The 2012 United States Olympian scored an impressive decision win on July 11 over fringe contender Rene Alvarado.

The 22-year-old Diaz has gained more of a following around Southern California and will likely have a partisan crowd travel to Indio from his hometown of South El Monte to cheer him on.

Tamayo (25-6-4, 17 KOs) has lost his last two consecutive bouts. In his last fight on June 27, Tamayo lost a one-sided decision to unbeaten Oscar Valdez. On Dec. 20, he was stopped in the fifth round by Jesus Cuellar.

Frankie Gomez (18-0, 13 KOs) has not fought since July 25 of last year when he won a landslide, 10-round decision over Vernon Paris.

Gomez, who is now trained by Freddie Roach and has had legal troubles in recent years, was scheduled to fight Humberto Soto on May 9 in support of the Saul ‘Canelo’ Alvarez-James Kirkland fight in Houston.

To the chagrin of many, Gomez weighed six-and-a-half pounds above the contracted weight of 141 pounds. The fight was scratched from the card and the HBO broadcast.