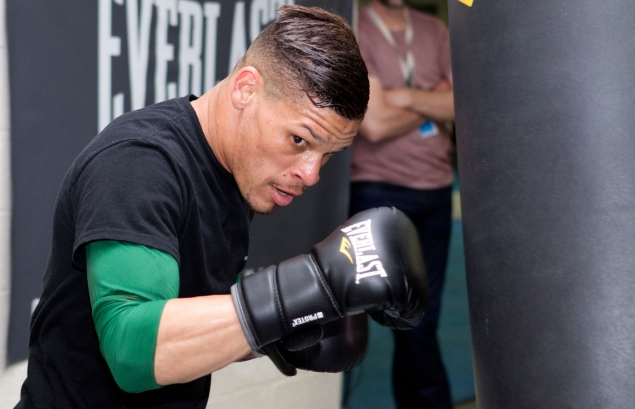 Featherweight Orlando Cruz believes he has one more run in him to win his first world title belt.

That path continues Friday night when he fights Gabino Cota at the Civic Center in Kissimmee, Florida. The 10-round bout will top a ‘Boxeo Telemundo’ telecast, which airs on Telemundo at 11:35 p.m. ET/PT.

Cruz, a southpaw, was unbeaten in his first 17 bouts as a pro before suffering consecutive losses to Cornelius Lock (2009) and Daniel Ponce De Leon (2010).

The 34-year-old Cruz would win his next four bouts in a row before challenging Orlando Salido for the WBO featherweight title in Oct. of 2013. Cruz would get stopped in the seventh round.

Cruz made headlines in the fall of 2012, announcing publicly he was gay.

“I developed physically and mentally to take such a big step in my life and in my profession, which is boxing, knowing that it would have its pros and cons, highs and lows in this sport that is macho,” Cruz said in an interview with the Associated Press. “I kept this hidden for many, many years. I am a proud gay man.“

Cota (18-4-1, 16 KOs), who hails from Navajoa, Sonora, Mexico, snapped a three-bout losing streak on June 13, stopping Javier Lopez in the sixth round. Those three losses were to Leonilo Miranda, Andrey Klimov and, most recently, Jonathan Oquendo.

In the co-feature, Emmanuel De Jesus will fight Cosme Rivera in an eight-round junior middleweight bout.